The West Bank city of Hebron won the World Craft City award, which officials hope will encourage cultural exchange and trade with other parts of the world. 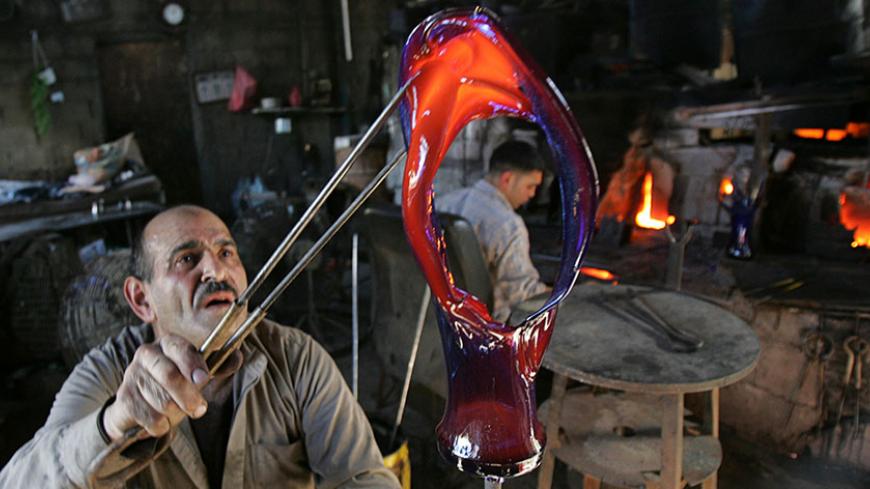 A Palestinian man holds up a vase in a glass factory in the West Bank city of Hebron, Dec. 15, 2007. - REUTERS/Nayef Hashlamoun

GAZA CITY, Gaza Strip — The city of Hebron is full of different types of crafts that distinguish it from other Palestinian cities. This led it to win the 2016 World Crafts City award, organized by the World Crafts Council (WCC). Rula Maayah, the Palestinian minister of tourism and antiquities, learned that Hebron won the title Sept. 6. The WCC organizes the competition on a yearly basis in a bid to record crafts from around the world and to encourage craft.

Ahmed Rajoub, an official with the Ministry of Tourism and Antiquities, told Al-Monitor he was thrilled to learn that Hebron won the title. He confirmed that this win was expected, as the WCC evaluation committee visited Hebron in early August and shortlisted the city. Rajoub said the results were announced earlier than expected due to technical reasons related to the council; the winners were to have been announced Sept. 22.

Ziad Jaber, an engineer at the Ministry of Tourism and Antiquities in Hebron, told Al-Monitor, “What made us win is our compliance with the conditions of the competition, as the city was up to the world level of handicrafts in terms of longevity and genuineness. Also, crafts directly contribute to the improvement of the economic situation of the workers and employ the highest possible number of workers in Hebron, where there are developmental policies set to improve the quality of this work.”

Jaber confirmed that the ministry opted for crafts for the WCC competition because Hebron excels at them and that Hebron’s crafts — glass, ceramics, pottery and embroidery — have both historical and economic importance. He said that while the competition only required one craft, the ministry preferred to submit four to enhance its chances of winning.

Jaber explained the nature of the four crafts that took part in the competition. Pottery represents the historical and cultural legacy of thousands of years, as it defines the history of the sites it is found in. Embroidery symbolizes the Palestinians’ inherent heritage, and women are trying to continuously develop and renew this activity.

He added, “The glass craft dates back to 1846 in Palestine and continues to maintain its high economic value. While ceramics is not an old craft, it recently garnered a great deal of popularity, which is why it was part of the competition.”

Asked about the privileges offered by the WCC to the winning city, Rajoub said, “This competition paves the way for an exchange of experiences with all the cities included in the archives of the WCC and allows the forging of direct relationships with artisans around the world.”

“The title will enhance the authenticity of handicrafts in the city, as Hebron will be recognized as a craft city around the world. This is deemed an achievement for all Palestinian cities,” Jaber added.

Jaber said that the title will shed light on the violations committed by Israel and settlers and will refute what he called the false Israeli narrative that attributes some crafts to Israel's own history. This win will open global channels for craftsmen to promote and showcase their products outside of Palestine and will encourage them to increase their productivity. It will offer them the chance to exchange their experiences with cities famous for the same crafts and will attract visitors and tourists interested in crafts.

He said the export of crafts is facing several obstacles imposed by Israel as the goods exported are very limited and often based on individual initiatives.

Badr Daour, the head of the Tourism Association and director of the Traditional Handcrafts Center, told Al-Monitor that Hebron is a cradle of traditional crafts with approximately 12 crafts: pottery, glass, engraving on wood, embroidery, bamboo, artifacts, mosaics, ceramics, copperplate, upholstery, pot manufacturing and traditional food. Daour said some crafts, such as copperplate and pot manufacturing, are on the verge of extinction due to the lack of the required attention.

Asked about the most important impediments facing the city’s crafts, Daour pointed to the absence of institutions that support the export of products, the lack of economic agreements with other countries and the failure to obtain internationally recognized quality certifications that would facilitate the export process — knowing that the goods exported by individuals are unrivaled in quality, both in terms of raw materials and the industry technique.

Daour said that the Palestinian embassies are not playing any role because of a lack of commercial attaches, and that this has harmed the promotion of these crafts at the global level.

“Add to this the lack of formal accredited crafts academies and the fact that these crafts are mostly only taught by grandparents and parents,” he added.

Daour hoped that the Ministry of Tourism and Antiquities would show further interest in the crafts of Hebron and that it would support artisans with all its strength, as crafts convey a historical, national and economical message.

Ziad Fakhoury, one of the most famous craftsmen in Hebron whose family has been working in pottery for 100 years, said pottery is facing several problems related to shipment and export through Israeli crossings due to the high price of cargo transportation that exceeds the pottery cost. He indicated that pottery craftsmen were exporting nearly 80% of their products to the Israeli side. Add to this is that areas in Hebron that have been dedicated to pottery are now overpopulated and that municipal officials have requested the closure of plants due to the harmful smoke that comes out of wood-burning stoves during manufacturing.

Fakhoury stressed that the number of factories recently fell from 13 to five due to those barriers and called on the Ministry of Tourism to pay further attention to these crafts, protect them from extinction and allocate space for such plants far from residential areas.

He told Al-Monitor, “The use of pottery is of great importance at the sanitary and environmental levels, as it is used for agricultural pots or cooking and drinking utensils, but people have become ignorant of its value.”

Abeer Osaily, director of public relations at the Hebron Women Charitable Society, indicated that the society employs a large number of women in embroidery to provide them with an income and to protect the Palestinian heritage. She hoped that the city’s win would lead their products to foreign markets.

Immediately after the results were announced, the Ministry of Tourism and Antiquities decided to hold a yearly crafts festival in Hebron, according to Rajoub.

He said that a crafts city in the Old City of Hebron will be built, based on an agreement with the Hebron municipality and the Hebron Rehabilitation Committee, which started to raise financial support to start the implementation of the project. He said the crafts city will be dedicated to the teaching, practicing and marketing of handicrafts.