Can Gaza rebuild its arts haven damaged by Israeli bombing?

The Arts and Crafts Village in Gaza City has provided a base for artists for nearly two decades, but after Israel's attack last month, the village needs help rebuilding. 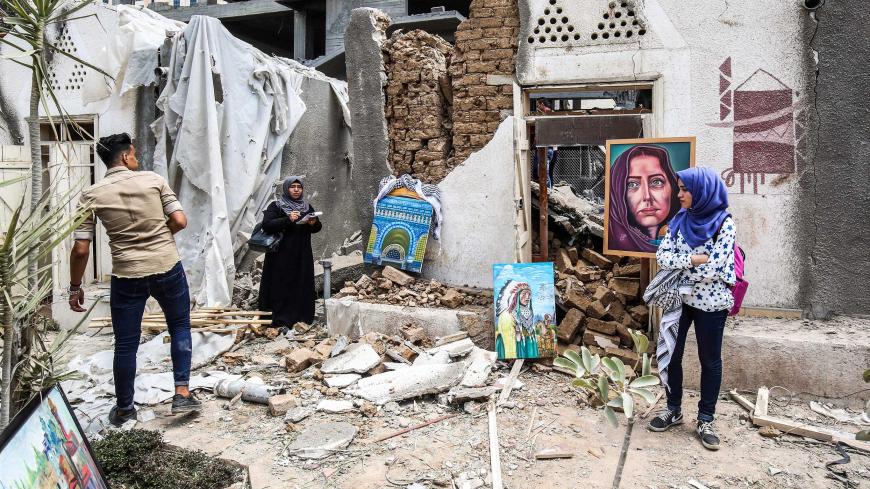 Palestinian artists display artwork in the yard of the damaged Arts and Crafts Village, which was hit by Israeli airstrikes on July 14, 2018, Gaza City, Gaza, July 16, 2018. - SAID KHATIB/AFP/Getty Images 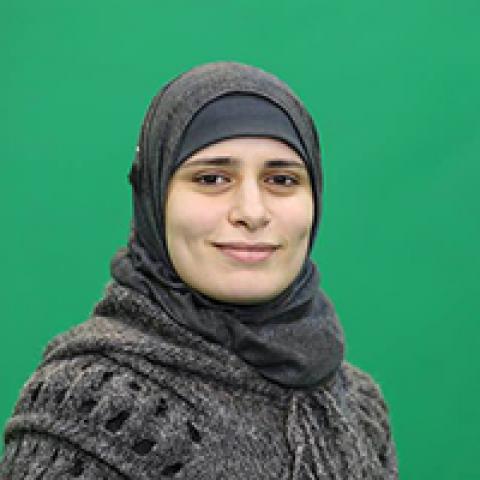 An oasis for artists and artisans, Gaza City’s Arts and Crafts Village is struggling for survival after parts of it were destroyed following Israeli airstrikes on the neighborhood last month. The artists' hopes for reconstruction of the village largely depend on whether they can get international support.

A small haven of traditional Islamic architecture in western Gaza City's al-Remal neighborhood, the Arts and Crafts Village consists of four houses made of red clay. The interior walls and floors are covered with ceramics, and traditional artisanal tools hang on the walls.

The village was established in 1999, with funding from the United Nations Development Program. The Gaza municipality presently runs the village on an extremely frugal budget.

“The village organizes art exhibitions for talented artists and artisans from Palestine and abroad,” Shakalia said. “We also hold cultural and artistic festivals to commemorate national events, such as Earth Day, Prisoners' Day, Nakba Day and Palestinian Heritage Day. We organize summer camps for children and teach them various crafts, such as embroidery, weaving rugs and pottery.”

The artisans in the village also restore antiques — tools, rugs, looms, wood engraving and embroidery — and sell them, mostly to the tourists.

But their efforts of the last 19 years were interrupted on July 14, when Israeli warplanes targeted and destroyed a nearby building, leaving the village and many of its artisanal works under rubble. On the day of the attack, Israeli forces launched a major offensive against the Gaza Strip, targeting al-Katiba Park, right next to the village, with heavy shelling, injuring 14 people and killing two children. Some believe that Israeli aircraft actually wanted to hit the village, in an effort to destroy Palestinian heritage.

The village’s administration said it would rebuild the destroyed parts of the village and carry on with cultural activities, even if it means erecting a small tent in front of the village. A group of artists and institutions displayed their artwork atop the dust and rubble of the village in protest of the Israeli airstrikes, demanding Israel stop its violations against cultural centers.

Shakalia said it will cost an estimated $300,000 to renovate the village so it can function as a full-fledged cultural center.

This is an impossible sum for the artists and artisans in the village to raise on their own, as the number of foreign visitors who visit the village and buy their work has shrunk over the years. “Before the Israeli blockade on Gaza, the village would sell over 70% of its artistic products to locals and to foreigners," Shakalia said. "However, Europeans and Arabs have not visited as much over the past 10 years and the village has only been selling 10% of its products.” She attributed the decline in sales and visits to closed border crossings, low salaries and poor economic conditions. Local families can barely afford to put food on the table, let alone by art, she added.

Shakalia explained that to compensate for the lack of visitors, the village has coordinated with schools, universities and institutions to arrange artistic and cultural field trips to the village.

In light of the recent bombing, some activities will be suspended, but not entirely, so as not to disrupt cultural activity altogether, she added.

Shakalia said that many parties are trying to find support to rebuild the village. EU delegations visited to inspect the damage after the destruction, including a Swiss delegation that came specifically for this purpose on July 30.

But the international cooperation and support that helped establish the village is also fading. Shakalia explained that about two months before the attack, a Belgian artist interested in glass art and lighting was working on cultural exchange between Belgium and Palestine. She visited the village every Saturday to see the work and discuss art with over 70 artists from the Gaza Strip. However, the Saturday of the bombing was her last visit. The artist left for Belgium and the project was suspended until further notice, Shakalia said.

The Arts and Crafts Village is a springboard for many local artists. Artist Shareef Sarhan told Al-Monitor that he had his first photography exhibition at the village in 2006. Artist Aya Juha told Al-Monitor that she participated in the village’s three-day exhibition, “Jerusalem is Calling You,” at the beginning of 2016. Juha noted that every exhibition at the village gives her the chance to introduce her work to new people and to meet new artists and admire their work.

Speaking about the impact of the Palestinian political division on the village, Shakalia explained that it was impossible for the Gaza municipality to keep supporting the village, as it has other priorities, such as providing basic services to Gaza City and building basic infrastructure. "Still, the municipality is doing its best despite meager means," she said.