In the mid-15th century, Sultan Mehmet II strategically dispatched 300 soldiers across the coast from Lesbos; today, the old Janissary village bids for technological, rather than military, power. 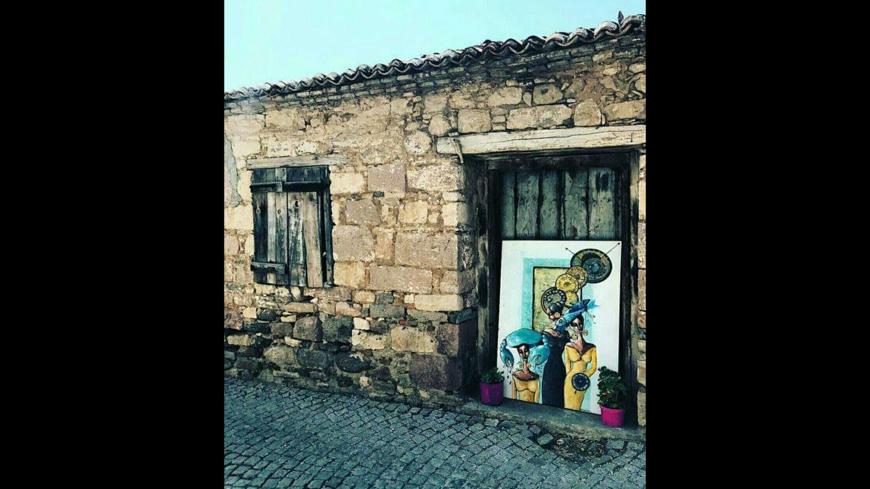 Kucukkoy, a picturesque village in northwestern Turkey just 6 miles from the UNESCO-listed town of Ayvalik, has a strong history of migration. Founded by the Janissaries, the elite troops of the Ottoman Empire, in the 15th century, the village first welcomed Greeks from Lesbos, then Bosnians who fled the Balkan wars in the early 20th century and, finally, a colony of artists who sought to escape the big cities in the last decade.

The Aegean village is now preparing for the opening of the Creative Technologies Center, affiliated with Istanbul’s Sabanci University, on Oct. 29, Turkey’s Republic Day. Located in an old elementary school, the center will host the university's summer classes, year-round training on technology and arts to local teenagers, as well as international workshops on science, technology, arts and mathematics.

“The opening of the center will be a further step in the direction of turning this village into a technology and arts hub,” said Simay Dinc, who contacted both the Ayvalik municipality and Sabanci University two years ago for this project. “It will be the cornerstone in our five-year journey to turn this medieval site into an ecological smart village, which welcomes not only local but international talent," she told Al-Monitor.

The village, whose name literally means “small village” in Turkish, was founded by the Janissaries who settled there in the 15th century, under the orders of Mehmet II, the Conqueror. The young sultan, giddy with victory over his conquest of Istanbul, had his sights on the small but wealthy island Lesbos, which he finally conquered in 1462. He sent 300 of his soldiers to the Western Anatolian coast just opposite the island he had conquered to ensure that the islanders would neither think of rebellion nor dare skip on the heavy taxes the Sublime Porte slapped on them. The Janissaries established a village in the fertile land between the olive groves and the silky beach, which came to be known as “Yenicharohori” — literally, “the house of Janissaries.” They were soon joined by migrants from Lesbos, who built the traditional Greek houses, with squarely cut rocks and gardens at the back.

Five centuries later, the Turks and Greeks were joined by the Bosnians from Montenegro, running away from the Balkan war. They established their own houses and small cafes that served tea and their traditional pastry, known as “Bosanski burek,” or Bosnian pastry. The Greeks left in the early 20th century, following the Greek-Turkish population exchange after Turkey’s War of Independence. Some of the houses were taken over by the local Turks and Bosnians, but the village was in shambles until the last wave of settlers — artists and intellectuals mainly from Istanbul who were looking to create an art village — moved in.

“When we arrived here five years ago, there were several coffee houses and one pastry shop,” said Dinc, who owns Kiraarthane, a co-working space and art gallery located at the village center. In the old Greek building with a tiny courtyard, she and her brother teach local children digital arts, including the creation of video games.

"Then I met Ugur Caliskan, a sculptor, who had settled here, and we worked hard to re-create and redefine the village. We worked with the municipality to allocate a street to women so that local Bosnian women could sell their handmade products there," Dinc said.

Ten women, blond and blue-eyed with Slavic features, sell embroidery, burek and castor oil, which they claim is the Balkan remedy to everything, from cuts to stomach aches.

Dinc added, "We launched festivals — including a traditional Bosnian spring festival that some 3,500 Bosnians visit every year. We brought in international mentors and entrepreneurs to explore the village's potential.”

“It was Ugur and Rabia Caliskan — the owners of the Arturo Gallery — who came here first,” explained Burhan Yildirim, an artist from Istanbul who staked the family’s life savings on a stone house with no roof. “Ugur bought the house in April 2013 and we followed him a few months later. Other friends and colleagues followed.”

Today, the village has about a dozen art galleries, two museums and a few real estate companies whose existence indicates that the old Greek houses are on the verge of becoming hot property. “You can buy top-notch art and one-of-a-kind jewelry or get some third-generation coffee, but you can hardly get a fancy meal,” quipped a gallery owner. “Unless, of course, you are particularly fond of Bosnian pastry.”

Ugur Caliskan, a sculptor from Ankara whose statue “Post-apocalyptic Satyr” has a price tag of $10,000, told Al-Monitor that at least 30 artists live in the village now. “We have revived the old civilization of the village — it is an open one, with women present in social life and villagers mixing easily with the newcomers."

“This village has a special atmosphere — mainly because it was a spot of migration and people know the necessity of helping each other out,” Gamze Bilge, an entrepreneur from Istanbul, who bought one of the destroyed houses to open The Nosy Witch cafe, where visitors are handed dark, pointed wizard hats upon entering.

“The day before the opening of the cafe, 50 women from the village turned up at the cafe to lend a hand. They washed the glasses and plates, put them away, swept the floor and arranged the cushions so that we could open the cafe the next day,” she told Al-Monitor.

As the village’s reputation grew, Dinc came up with the idea of establishing in Kucukkoy a university campus — or at least, an educational center. Two years ago, she contacted Guler Sabanci, the managing director of Sabanci Holding. Sabanci was listed in 58th place on the 2017 Forbes list of the World's 100 Most Powerful Women.

“We invited Ms. Sabanci [who has a summer house in nearby Ayvalik and knows the region] to the village and asked her to consider our plans of building a creative center in an old school building. She agreed, and Sabanci University worked hard, for two years, to obtain permissions to open it,” Dinc said. Finally, in April, the municipality and Sabanci University signed a protocol allocating the old school and the land around it to the university to be used as its Kucukkoy campus.

“This is great, as we will be able to provide innovation incubators, artist-in-residency programs through the center,” Ugur Caliskan noted. “We hope that more people with talent in technology, in the arts and other expertise will come to this village.

In July, Dinc held several workshops in Kiraarthane on immigration for a group of academics, bureaucrats, entrepreneurs and United Nations Development Program officials — members of an informal community called TACT Agora. Asked why they have selected Kucukkoy, Ozgur Atanur, a musician, creative communications expert and a member of TACT Agora, told Al-Monitor, “Global change-makers seek refuge in places of authenticity to preserve life and creativity. Kucukkoy is one such place. So it was natural for our collective of dreamers and doers to choose this medieval village in our discussion on refugees, their identity, the prejudices they confront and their potential in a mobile world.”

The village’s five centuries of history and its ability to grab the zeitgeist and change its power base — from military power in the 15th century to technology in the 2010s — proved to be an inspiration for the refugees who participated in the workshops. Speaking of identity and prejudices against them, Khaled Fattal, a Syrian refugee who teaches Syrian children in Gaziantep science and technology through robots, simply said, “I am not interested in what they call me. I am interested in what I can achieve.”