The refugee crisis sparked by war and economic upheaval in the Middle East leaves its mark on the Istanbul Biennial and satellite events. 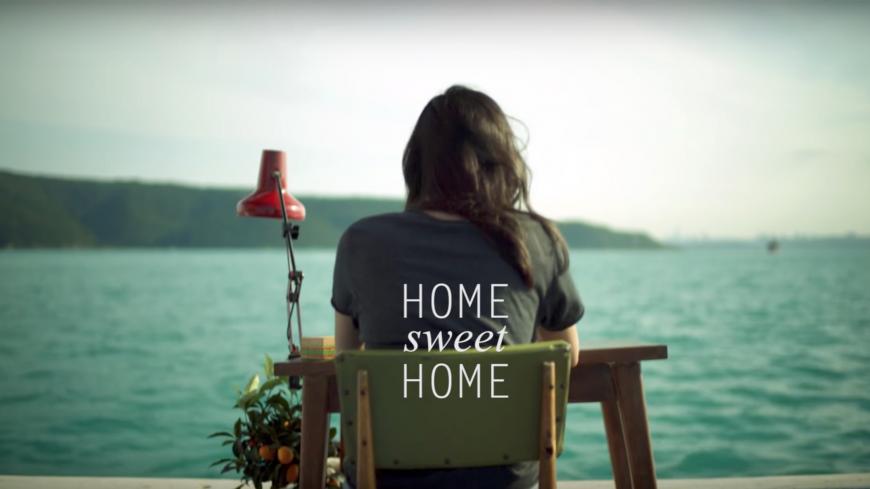 The Turkish artist Volkan Aslan’s film installation about displacement for the 15th Istanbul Biennial reminds us that borders are arbitrary. It was therefore fitting that the artist would also present the work on the Greek island of Lesbos, where thousands of refugees are stranded in what is in essence their temporary, makeshift home.

The triptych “Home Sweet Home” follows two women going about their lives in what appears to be dreamy domesticity, but their home is then revealed to be a vessel plying the Bosporus Strait in search of an elusive safe haven. The new work is being shown simultaneously in Istanbul, where the theme of this year's biennial is “A Good Neighbour,” and in Lesbos, where it occupies the upper floor of the Mytilene Municipal Art Gallery, located in what had been the Ottoman governor's mansion.

“These women are wandering, but we do not know where they are heading, what they are fleeing. Is it because there are no good neighbors left?” Aslan said in an interview with Al-Monitor. “Showing this work in Lesbos felt important because, like the boat in the film, it offers shelter.”

At the height of the refugee crisis in 2015, Lesbos was a point of entry for hundreds of thousands of migrants fleeing to Europe. After the European Union tightened its borders last year, the Aegean island became a dead end for those having gotten that far. On a wall along a road en route to the camp, someone has scrawled “Destroy all prisons.”

One of history’s largest mass migrations, sparked by years of conflict and economic turmoil in the Middle East and beyond, has left a searing mark on the biennial, which began Sept. 16 and runs through Nov. 12 and is the premier art event in Turkey, now home to 3 million uprooted Syrians. Ingar Dragset, of the Berlin-based Nordic curator duo Elmgreen & Dragset, which curated this year's exhibition, told Al-Monitor, “Our focus on home and neighborhood is about belonging, about the search for the normalcy of everyday life that for many in Turkey is almost impossible. We found that the migration crisis is a very natural part of talking about the changing meaning of home today.”

In “Sammelstelle,” a small room clad in corrugated iron, Germany’s Olaf Metzel evokes the claustrophobia of hastily erected holding pens for refugees. The cheap construction material is also used by poor migrants to build new homes in urban centers. Mahmoud Obaidi, who fled Iraq in 1991, presents drawings and a personal archive from his homeland in “Compact Home Project” to remind viewers that war can destroy millennia-old civilizations in a heartbeat.

The Brazilian artist Victor Leguy visited a Syrian-owned bookshop in Istanbul to swap personal items with refugees to expand his “Structures for Invisible Borders,” an installation in which such everyday objects as a pair of slippers and worry beads are partially whitewashed to represent the recording of history.

Leguy told Al-Monitor, “History is written by the winners. So many of their ideas surround us, we just take it in without thinking. The idea here is to move the spotlight and show another perspective, to disturb the audience with micro-histories.”

Local galleries and other institutions have organized exhibits and other activities around the biennial's theme, exploring dislocation and loss. Installed in a dilapidated mansion in central Istanbul, “Welcome to Homeland,” by the Turkish artist Halil Altindere, reimagines the lives of two Syrian refugees — the cosmonaut Muhammad Faris, who defected from the Syrian air force, and the hip-hop artist Mohammad Abu Hajar, who now lives in Berlin.

The Mahalla Festival, taking its name from the Arabic word for “neighborhood,” exhibited works by artists from 12 countries, including refugees, focusing on the burdens of forced migration. The exhibition “Trans-ID” featured works primarily by expatriates and dual nationals examining how identity mutates across borders. Their work was presented in a 200-year-old Armenian Catholic church, whose worshippers abandoned Istanbul in earlier waves of migration.

The most stirring work in “Ai Weiwei On Porcelain,” a wide-ranging show by the Chinese mega-artist at the Sakip Sabanci Museum, is a study in blue-and-white porcelain produced specifically for the Istanbul exhibit that portray the tireless repetition of war throughout history. Stacked columns of Ming-style vases illustrate the refugee saga in a two-story room covered in wallpaper, which is titled “Odyssey” and depicts men, women and children on storm-tossed seas and huddled in tents.

Ai traveled to Lesbos at the height of the refugee crisis, drawing the world’s attention to the calamity unfolding on the island's beaches. “The most important art is always related to difficult moments,” Ai said during a talk at the Sabanci Museum last month. “We cannot separate the human tragedy from suffering, nor from beauty.”