How this West Bank village became a writers' retreat

A Palestinian journalist living in Germany started a cultural retreat program in the West Bank village of Kafr Rumman where visitors, in exchange for educating and interacting with the area’s children, can stay for free. 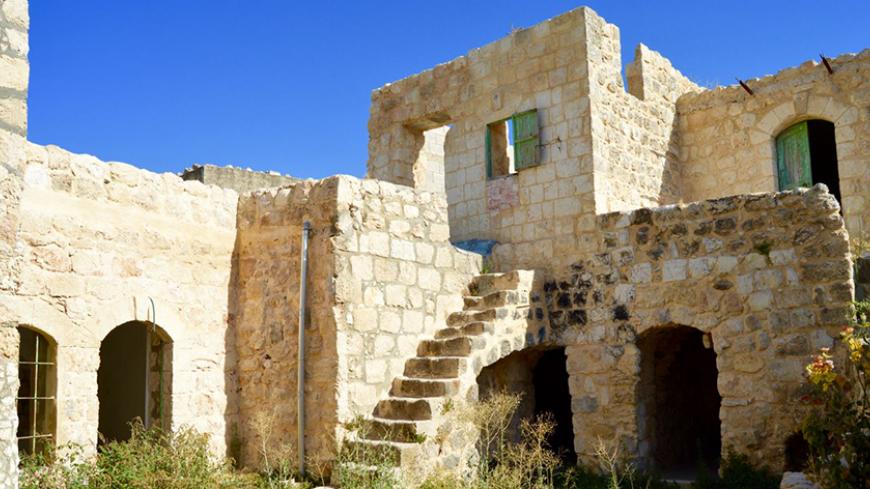 A building in the village of Kafr Rumman, West Bank, is seen in this undated photo. - Facebook/welcometopalestinecom

RAMALLAH, West Bank — Feb. 1 marked the end of the winter vacation for Jordanian storyteller Sally Shalabi, who spent most of her time off in the Kafr Rumman village retreat, near the city of Tulkarm in the northern West Bank. As part of a cultural retreat program, Shalabi spent most of her time in an old house that was restored by the owner to receive intellectuals and artists.

Shalabi learned about the Kafr Rumman residency program from a friend’s Facebook page, and decided to visit the place and write about the retreat and the artists and writers who spend their time there.

Abed Rahman Othman is a local journalist and editor in chief at the German radio station DW (Deutsche Welle). He restored his family’s house along with other old houses he bought in the old town of the village at his own expense, to host writers and artists as part of a retreat program that he dubbed the Dooz Artists Residency, which started receiving guests at the beginning of 2017.

In return for free accommodation, the guests provide public services to the village, such as painting, drawing, writing and reading workshops for women and children.

Shalabi is Palestinian and hails from Tulkarm, located 7 miles west of Kafr Rumman. She visits her relatives in Palestine once a year, but this year decided to stay at the retreat center where she was able to focus on her research project.

She told Al-Monitor that after contacting Othman, she did not hesitate to travel to the West Bank to spend her vacation there. “I need my own space in a quiet or secluded place to be able to concentrate on storytelling performance. The Kafr Rumman residency was the ideal place for this,” Shalabi said.

She noted that during her stay, she helped the team make the last touches to the place, working with Othman, to fit the rugs, carpets and furniture. “I consider myself to be part of this magical place. I spent hours inside this house and never felt alone. I feel at home, as if I'm one of the locals and the owners of the house,” she said.

As per the retreat's regulations, Shalabi made sure to interact with the children in the village. She said, “I work as a storyteller and this is what I did during the time I spent in the village. I would meet children randomly and tell them stories under a tree in the street. Many would gather around."

Othman, who took an unpaid leave from his job in Germany to return to Palestine to restore the house, told Al-Monitor, “The main goal of this retreat is to encourage creativity in Palestine.”

“The house is open to all intellectuals, writers and artists who wish to spend time at a cultural retreat. It is a place for them to write, draw, paint or play music in return for spending half a day once a week teaching the children in the village — each in his or her field of specialty,” he said.

Othman, who has lived in Germany for 37 years, said that in the past he interviewed Arab writers who used to spend their vacations at the home of writer Heinrich Theodor Boll, who was awarded the Nobel Prize for Literature in 1972. Boll's house turned into a retreat for many writers.

“I had the idea, but I made up my mind when I heard people talking in the village that the owners of some old traditional houses were considering demolishing them to build modern ones instead,” he said.

Othman bought eight houses (at a price he did not disclose) near his family's residence and started his new project, in the hope that some cultural and official institutions would show interest.

“All institutions are welcome to take part in the restoration works, so the houses could be used as public facilities later on — perhaps operating under the name of the institutions that contribute to the project,” Othman said.

The house that has turned into a retreat is located in the old part of the village. The furniture was renovated and some new pieces were added, in addition to kitchen utensils for visitors to use. The house also has a small library and a garden surrounding it.

Othman is seeking to revive the heritage of traditional Palestinian houses. The restoration of the buildings he bought was done along the lines of the Palestinian traditional construction style, with natural stone exteriors. This style is vanishing in light of the wave of modern buildings and urbanism. He hopes that Kafr Rumman turns into a cultural beacon in this marginalized area in the West Bank.

According to Saeed Abu Mahla, the project coordinator at Abdul Mohsen al-Qattan Foundation in the nearby city of Jenin, this marginalization further contributed to getting the word out about the Kafr Rumman residency program and to promoting cultural projects in the area.

“Providing education, awareness and entertainment sources to a small marginalized town is of paramount significance. This would consolidate the connection of children and citizens to their heritage and tradition, which are fading away in our modern life. There should be more efforts to turn these projects into large cultural centers,” Abu Mahla told Al-Monitor.

He said, “The Kafr Rumman residency program is proof that sometimes individual efforts and initiatives are better than that of official and civil institutions, despite the fact that they require pressing need for sustainability and development."

Abu Mahla noted that the biggest challenge for the Kafr Rumman retreat center is sustainability and permanency. “I believe this project needs joint social effort to be able to continue,” he said.

The Kafr Rumman residency program does not only bring the village to the attention of the public, but it could also be a cultural opportunity for the entire northern West Bank, which remains sidelined in the media and culturally, as the cultural focus is on the city of Ramallah in the central West Bank.