A history and geography teacher has devoted decades to painstakingly deciphering Palestine's rich heritage as depicted on the walls of its ancient buildings. 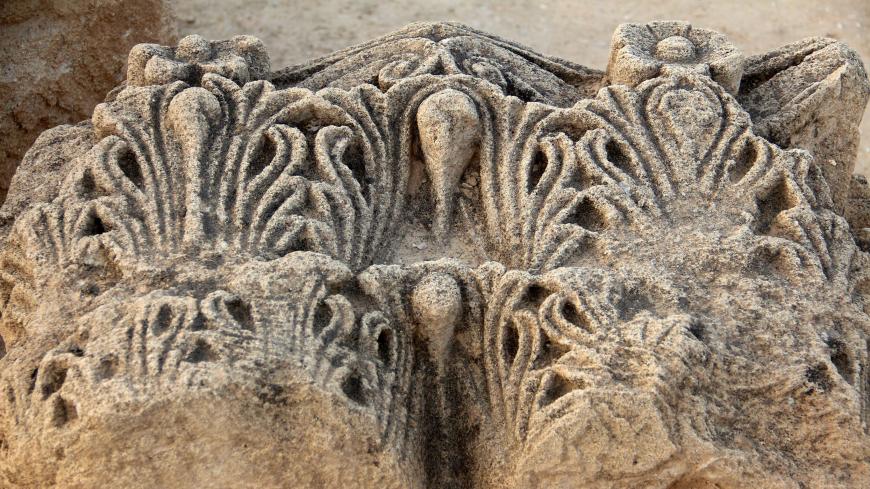 RAMALLAH, West Bank — For more than three decades, Ibtisam Sulieman has been fascinated with the symbols that adorn the buildings of Palestine. The history and geography teacher snaps photos of the vegetal engravings, geometric shapes, crosses, symbols of the Virgin Mary and Arabic letters engraved on the facades.

Dating them or deciphering their meaning, however, has been far from easy.

“Some of the symbols and ornaments on the buildings reflect the beliefs and traditions that prevail in different eras,” Sulieman told Al-Monitor, explaining that the Canaanite, Christian, Umayyad and Abbasid constructions are all rich in ornaments and decorations.

“The hexagram, for example, was part of the Canaanite heritage that symbolizes the fertility deity Ishtar, which was believed to bring prosperity to household,” she said.

Others such as grapes or mulberry leaves reflect social practices of the time. In the old times, a bride would paste a piece of dough at the door of her new house. If the dough stuck, it would portend a happy and long marriage. In this tradition still practiced in some parts of the Middle East, the bride occasionally places a grape or a mulberry leaf — symbols of prosperity — on the dough. “The leaves carved above some of the doors come from that tradition,” Sulieman explained.

As a new student of Middle Eastern studies at the Birzeit University, Sulieman became fascinated with these symbols in 1986. She began photographing ancient buildings — houses, monuments, shrines — in different parts of Palestine. In the mid-1990s, she focused on the meaning behind the symbols. It meant sifting through dozens of books, articles and documents on Palestinian history, religions and archaeology, as well as local legends and novels. “There is no comprehensive books on the symbols and few researchers are interested in deciphering them,” she told Al-Monitor.

For two decades, she conducted her own research guided by the photos she took. Over the years, she accumulated photos of buildings from different towns and villages including Ein Avdat in the Negev, Deir Istiya, al-Taiba, Arraba, Beit Sahour, Beit Ummar, Birzeit, Ramallah, Ein Karem, Yabrud, Beitin, Nablus, Jerusalem, Mamilla, Zabadeh, Raba, Ras Karkar, Silwad and Jifna. In most of these photos, the geometric shapes, vegetal motifs and religious symbols feature prominently.

In the cities of Ramallah, Bethlehem, Beit Jala and al-Taiba — where there was a significant Christian population — buildings bear Christian symbols such as crosses and images of the Virgin Mary, Sulieman said.

In the village of Kur, in Tulkarm in the northern West Bank, old houses bear Quranic verses in Arabic letters. “These date from the Mamluk and the Ottoman periods,” explained Sulieman.

Iin other villages in the Marj ibn Amer plains, the vast majority of buildings are adorned by vegetal motifs, mainly chrysanthemums, known by the Canaanites as the Golden Rose.

“In the southern and central parts of Palestine, most houses had geometric shapes on their walls. The five-pointed star was used to ward off the evil eye and envy and the six-pointed star — the hexagram — represented the deity of fertility. These symbols are seen on the buildings in Avdat in the Negev, ” she explained.

In some agricultural regions, building ornamentation indicates the type of crops grown in the area. Many of the buildings in Ramallah, Bethlehem and Nazareth are adorned with grapes because of the vineyards that are still spread across these towns.

Still others displayed wealth — and a willingness to share. “The homes of the rich were characterized by the abundance of symbols and decorations that were different from those of low-income people, whose ornaments were limited to religious symbols,” Suleiman explained. “Homes with a plate and a spoon at the entrance meant that guests and strangers were welcome to visit, share food and anything they needed.”

Some of the writing showed the name of the person who constructed the building, the owner and the date — which helps decipher the history of Palestine, where many families were forced to leave their houses.

Eager to share this heritage with the younger generations, Sulieman gave a lecture Jan. 10 to a group of young men and women as part of the cultural heritage program held by the Children and Youth Public Library in the Ottoman Court building, affiliated with the Ramallah Municipality in the center of the West Bank.

She regularly explains the symbolism to her students in her history and geography classes at the Greek Catholic School in Ramallah. Her Facebook page, “Palestine in the Eyes of Palestinians,” where she posts her photos from all over Palestine, aims to reach a wider audience. She organizes treks called “Walk to get to know your country,” a project she co-founded in 2012 to offer students walking tours in different parts of her country.

So far Sulieman has held eight different photo exhibitions in Acre, Ramallah and other West Bank cities. Her ultimate goal is to publish a book documenting the ornaments and their meanings if she can secure the necessary funding and support. “This way,” she said, “The heritage of the past and what those symbols show can be accessible to all.”