The intricate golden and silver embroidery called tally has a long tradition in Upper Egypt, and a small community of craftspeople is working to make sure its future is just as bright. 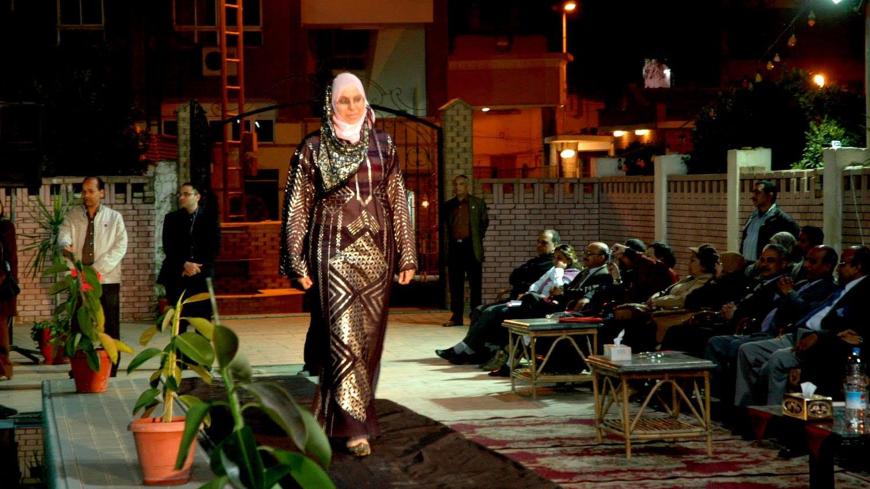 A model displays a traditional robe with tally embroidery in Assiut, Egypt, in an undated photo. - Saad Zaghloul/Tally House

Tally, embroidery done with gold and silver thread on tulle and other light fabrics, is associated with belly dancers’ glittery costumes and therefore looked down on by many Egyptians. But artist Saad Zaghloul is determined to restore the prestige and preserve the heritage of this dying craft.

Zaghloul founded a training center and museum in Assiut, Egypt, called the Tally House in 1994 to both save the craft and end its bad reputation. “Tally embroidery was used for making belly dancers' costumes in the early 1930s. This is why it was shunned by Egyptian families,” he explained to Al-Monitor. In fact, he added, the delicate embroidery was once part of a bride’s trousseau.

The special embroidery, which has been practiced for centuries, had its heyday in the 19th century, under the reign of Muhammad Ali Pasha in Egypt (1805-1848) when foreigners who were interested in Oriental delights from costumes to spices bought embroidered clothes and took them back to Europe — France, Italy and the British Empire. Some of these fabrics, shot through with gold or silver metallic threads, can be seen in European museums today.

The craft had a revival in the 1950s. Suleiman Hazin and Aziza al-Shaarani gave a great boost to the craft between 1955 and 1966, Zaghloul explained. “Hazin, who established and presided over of the University of Assiut, settled in Assiut with his wife, Shaarani. It was she who had a passion for tally, and she provided the silver and gold thread as well as the light fabrics to the women in the governorate, then got them to sell their embroidery to her friends,” he said.

Zaghloul became interested in tally embroidery by chance. “One of my friends, an artist, showed me a photograph of a piece of cloth embroidered with gold thread in 1992. The photo was brought to Egypt by an English woman who had taken it at the Victoria and Albert Museum in London. The museum’s tag said that it was 'Assiut Art,' so she was here, trying to find the origin of this embroidery technique associated with Upper Egypt heritage. During her tour in Assiut, she did not find any product similar to that in the photo.”

Zaghloul started searching for tally embroidery himself and eventually found two women in a village in the eastern Assiut governorate who did tally embroidery. These two women told him of the efforts of Aziza al-Shaarani to revive the craft.

“When I founded the Tally House in 1994, these two women laid the foundations for teaching the tally embroidery. All women who subsequently joined the center applied their technique.” Since then, the Tally House has trained some 500 Egyptian women in regular workshops and classes. Alongside its permanent exhibitions, it sells embroidery and encourages students to participate in embroidery fairs and exhibitions around Egypt.

Zaghloul said that there are about 120 symbols or motifs that are stitched into the designs, including geometric shapes such as mosque, churches or houses; plants such as reeds and trees; and even animals, including camels. “The stitched shapes express the cultural identity of Upper Egyptian society. These symbols vary according to the customs and traditions of each village in Upper Egypt,” he said.

The tally revival has provided employment opportunities for many women in Assiut governorate who make the clothes at home. “It only requires a special needle with two eyes, threads of gold or silver and a light fabric,” Zaghloul explained.

Fatima Ahmed, who has been working in embroidery in Assiut for 10 years, told Al-Monitor, “We must preserve our Upper Egyptian heritage. My mother was trained at the Tally House and she taught me this craft.”

Usama Ghazali, who created the online portal “Yadaweya.com” -Arabic for “Handmade Treasures” - told Al-Monitor, “The tally embroidery was initially associated with bridal gowns. Bridal dresses and veils were made of a fabric bearing embroidery that symbolized the bride's journey from her father’s home to that of her husband. We would find embroidery in the form of camels carrying palm fronds, trees as a sign of goodness, the Nile as a symbol of purity or a guard to save the bride from the evil eye. These shapes on the bridal clothes reflected joy and happiness in the Egyptian popular heritage.”

Today, the tradition as well as the old patterns are kept alive in the Tally House and Gazeirit Shandaweel, a village in Sohag, he added.

But the sector is small, despite its great potential both at home and abroad, he said. “There is a lack of a trained workforce and all materials are imported,” Ghazali noted. “Besides, there is no entity in Egypt that represents tally artisans and could [negociate] prices or subsidies.”

He asserted that the delicate needlework is part of Egyptian heritage and should be marketed as art, not simply craft. “Women have expressed their feelings, longings and identity through those embroidered symbols throughout years,” he said.

Afaf Mahmoud, who does tally embroidery and teaches others at home in Gazeirit Shandaweel, believes that part of the problem is that the delicate embroidery, made with expensive metal threads, cannot compete with cheaper, machine-made products.

“The gold or silver threads are imported, and therefore expensive. This makes the tally pieces unaffordable compared to similar cheaper products,” she said, adding that the only way to sustain the craft is through state support. “The government should open permanent markets in Egypt and offer the opportunity to participate in international exhibitions so that Egyptian tally clothes can be marketed at home and abroad,” she said.

Folklore researcher Mohamed Shehata al-Omda told Al-Monitor, “This heritage is not well known, though it reflects the Egyptian customs and traditions through its patterns and designs that ornament the garments of women in Upper Egypt.”

He said, “In order to give it the credit it deserves, Egypt is currently proposing to have this intangible heritage inscribed on UNESCO’s list of Intangible Cultural Heritage so it can be documented as one of Egypt’s authentic arts and get more attention in the global arena.”