How a Palestinian park surrounded by settlements is promoting organic farming

A Palestinian family has turned the site of an old house into an organic farm and a park for visitors to enjoy the beauty of the land, despite the site being in close proximity to Israeli settlements and checkpoints. 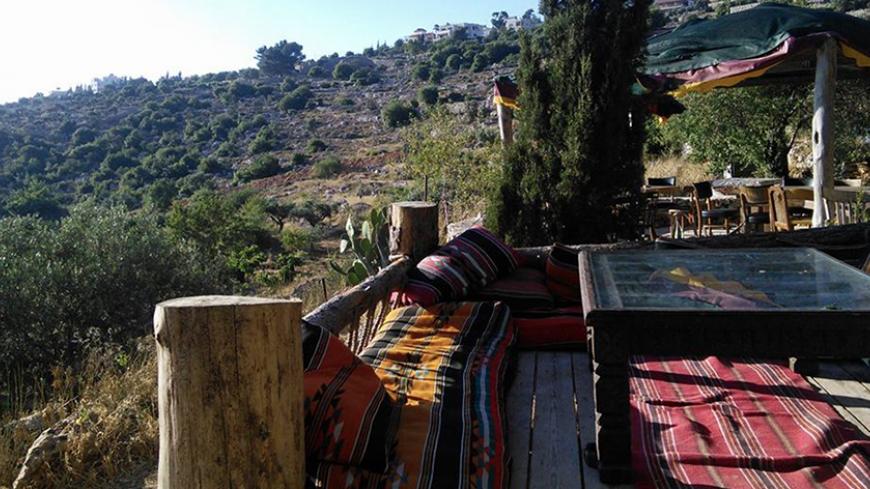 BETHLEHEM, West Bank — Hosh al-Yasmine park is located on a hilltop overlooking Wadi al-Makhrour between Bethlehem and Beit Jala in the West Bank, in an area with many Israeli settlements and checkpoints. The park's visitors marvel at the details of the place, from furniture and decor to the food it serves. The sunsets are especially spectacular.

Hosh al-Yasmine is located on 36 dunams (9 acres) of land in the middle of the park in a house dating back to the 1940s. Since 2011, the Saadeh family has been renting the house from its owner — who left the area and settled in nearby Beit Jala — and has turned it into an organic farm and park, offering traditional foods with organic crops and meat.

The Saadeh family has not made many changes to the farm and house, since it is located in Area C, where Israel forbids any construction. Bashar Saadeh, who helps his father, Mazen, at the park, told Al-Monitor, “Israeli forces forbid any construction in this area. [We] renovated the house and tried to reorganize it to better suit visitors without building anything new.”

Renting land in the Palestinian territories generally consists of paying a sum of money yearly for the use of the land for a period of time that both parties agree to, which does not involve a direct profit for the original landlord. The lease agreement is a legally binding contract between the landlord and the tenant.

“We tried as much as possible to keep the place as is, especially the Canaanite aspect of the farm that is surrounded by a stone wall," said Saadeh. "Part of the idea is to see the valley of Wadi al-Makhrour where wild animals roamed in the past.”

Hosh al-Yasmine is free to visitors, and the food served is available at a reasonable price.

The Saadeh family gave the park its current name: "Hosh" describes the construction system in Palestinian villages where houses have a common space for people to meet, and "al-Yasmine" refers to the jasmine flower that grows in Palestine.

Hosh al-Yasmine is not the family’s first experience in running a project like this. Mazen is a plastic artist, and his interest in arts and in the correlation between art and heritage inspired him to open Hosh E’lleil Rabe in Birzeit's old town in 2008, which consists of houses that were built before 1948 and that Birzeit municipality renovated in order to rent them for cultural events. Hosh E’lleil Rabe is where artists can work with locals to teach them art and sculpture. Palestinian dishes such as musakhan (roasted chicken with onions served over flatbread), Palestinian couscous and vine leaves are served on-site. After the contract with the municipality ended, the Saadeh family took on the Hosh al-Yasmine project.

Hosh al-Yasmine has become a space for anyone wanting to escape the chaos of modern life. It is a place for artists and writers and for anyone who wants to learn how to cook traditional foods and grow organic crops. In this regard, Saadeh said, “Many artists and writers visit Hosh al-Yasmine and spend days here. We offer them organic food based on traditional Palestinian recipes. This is how we link arts, literature and authentic Palestinian cuisine.”

Saadeh said that not only locals visit Hosh al-Yasmine, but also residents from cities in the West Bank and foreigners. They enjoy the park's natural surroundings and its organic food, leaving positive feedback on the site's Facebook page.

The area where Hosh al-Yasmine is located is between the settlements of Etzion, Gilo and Beitar and is surrounded by the checkpoints of al-Anfaq, al-Walaja and al-Maliha. Hence, Hosh al-Yasmine is an important site that encourages citizens to remain in the area, despite the risk of losing the land to the settlers. Following the Israeli occupation of the West Bank in 1967 and the emergence of the settlements, many Palestinian families left the area, though there is no official data on the exact numbers.

Saadeh added, “Israel and many settlers have pressured us to leave Hosh al-Yasmine. Water is almost never available because all natural springs are diverted to the settlements. Besides, checkpoints surround the area when security incidents occur nearby. This happened with the onset of the Jerusalem intifada in October 2015.”

Ruba Anabtawi, editor-in-chief of the Palestinian online magazine Afaq al-Bi’a wal Tanmia (Environmental and Developmental Horizons), told Al-Monitor, “Hosh al-Yasmine is important because it is located in an area threatened with confiscation by the Israeli authorities. Its visitors discover Israel’s bothersome measures on landowners and develop a connection with this land that many people have left.”

Anabtawi added, “Hosh al-Yasmine is located on a hilltop with a breathtaking view. The lands are among the most beautiful in Palestine and boast a unique biodiversity far from cement constructions.”

She said that organic food and agriculture also set the place apart. The kitchen serves chicken raised on the site's farms, and the vegetables and trees are cared for without the use of chemical fertilizers.

Anabtawi concluded, “Food is prepared in a traditional way with organic produce that is missing in our daily diet [these days]; it is served with old clay utensils. Citizens become more aware of the importance of organic food, especially since it is connected to Palestinian heritage.”

Hosh al-Yasmine is an important landmark that boasts a beautiful location in natural surroundings and welcomes artists, entrepreneurs and writers, as well as residents and foreign visitors. But its most significant aspect is its encouragement of citizens’ persistence to remain on the land that is threatened by settlement expansion.