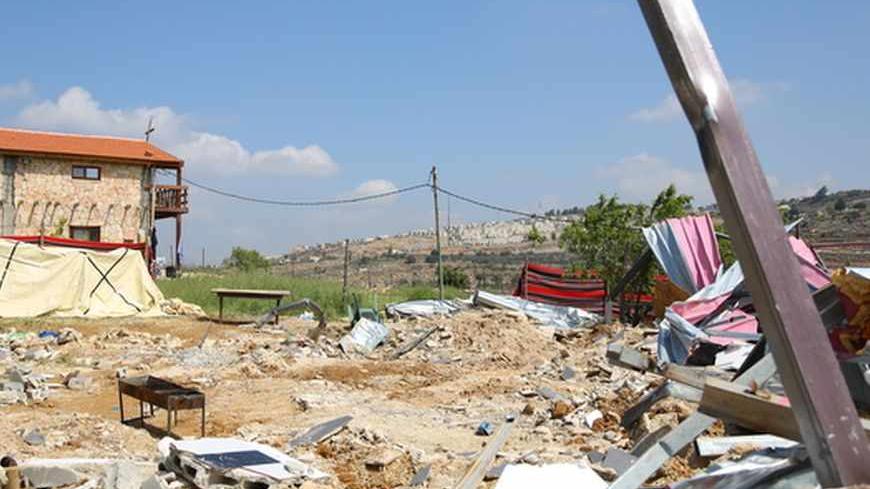 AL-MAKHROUR, West Bank — A large pile of twisted zinc and concrete rubble in a parking lot is all that is left of the popular al-Makhrour restaurant in the occupied West Bank. Dirty pots and pans lie on the ground and broken glass crackles under the feet of owner Ramzy Qissiyeh as he tries to salvage more buried items.

Last week, Israeli soldiers arrived with bulldozers and demolished his family-owned restaurant, located in the picturesque valley near the West Bank city of Bethlehem. Qissiyeh said this is the second time the Israeli army has demolished his business, citing the lack of a building permit.

“All I could do was watch and mourn,” Qissiyeh told Al-Monitor. His family house next door also has a pending demolition order, but has so far been spared.

Interim peace agreements signed in the 1990s allotted around two-thirds of the West Bank, Area C, to full Israeli military and administrative control.

The Israeli army said all construction in the West Bank is subject to building codes and planning laws, and unauthorized construction is grounds for demolition. Residents say building permits are nearly impossible to obtain and they are forced to build without them. They also accuse Israel of using demolitions to tighten its hold on the territory and evict them from their land to expand Jewish settlements.

A spokesman for the Israeli civil administration, Guy Inbar, said the restaurant was destroyed per a demolition order issued back in 2005.

Severe restrictions on building and farming

The steep, rocky valley of Wadi al-Makhrour is dotted with ancient apricot and olive-tree terraces. Residents of the neighboring village of Beit Jala have for decades owned the fertile agricultural area that since 1967, the year Israel occupied the West Bank, has been subject to severe Israeli building and farming restrictions. Only a few small brick houses are scattered over the hills.

According to the United Nations Office for the Coordination of Humanitarian Affairs (OCHA), between 2000 and 2007, over 94% of applications for building permits in Area C were denied. The body said for the 2.5 million Palestinians living in the West Bank, construction is prohibited in up to 70% of Area C, and a range of restrictions in the rest of the area make it virtually impossible to get a building permit.

According to the Applied Research Center in Jerusalem (ARIJ), since 2011, the Israeli army has demolished the restaurant, four houses, an agriculture well and 53 electric poles in al-Makhrour. Several other houses and structures have pending demolition orders.

“There has been a deliberate Israeli campaign to prevent development in that area, where even repairing old agricultural structures is prohibited,” Suhail Khalilieh, head of the settlement-monitoring department at ARIJ, told Al-Monitor.

In a March 2013 report, the Israeli Committee Against House Demolitions said that in 2012, Israel demolished a total of 600 Palestinian structures, including at least 189 homes. Some 880 Palestinians, more than half of them children, were displaced.

“The motivation for demolishing these homes is purely political and racially informed: to either drive the Palestinians out of the country altogether (the “quiet transfer”) or to confine the four million residents of the West Bank, east Jerusalem and Gaza to small, crowded, impoverished and disconnected enclaves,” the report said.

Overlooking al-Makhrour is the Jewish settlement of Har Gilo, home to some 500 Jewish settlers. The faint rumble of construction can be heard over the hill as more identical stone apartments are built. Rights groups say Israel plans to build another settlement called Givat Yael nearby.

Israeli group Ir Amim said the plan for the Givat Yael settlement, which dates back to 2003, involves 3000 dunums (741 acres) of land to provide 14,000 housing units for over 40,000 settlers, along with a commercial area and a sports club.

Some 500,000 Jewish settlers live in the West Bank and east Jerusalem in over 100 settlements, most of which are located in Area C. The World Court has ruled that all settlements are illegal. Israel rejects this, and has said it will keep many of the settlements under any future peace deal with the Palestinians. The ARIJ said land belonging to the Palestinian villages of Beit Jala, Battir and al-Walajeh would be annexed as part of the Gival Yael settlement.

If constructed, Givat Yael will create a contiguous built-up area linking Jerusalem with the Har Gilo settlement and create a strategic link with the Gush Etzion settlement block, located southeast of Jerusalem.

Khalilieh said al-Makhrour falls in a strategic location for Israel, as it constitutes a geographical linking point between the Gush Etzion settlement block and the Har Gilo settlement.

“Al-Makhrour would fill some of the territorial gap between the two settlements,” Khalilieh said.

According to a European Union report issued last year, in 1967, between 200,000 and 320,000 Palestinians lived in Area C of the West Bank. But demolition of Palestinian homes and structures and the prevention of new construction has seen the population drop to 150,000. Meanwhile, the settler population in Area C has grown from 1,200 to 310,000, the report said.

In al-Makhrour, Qissiyieh said his restaurant had only been operating for two weeks when the trucks came for the second time to demolish a restaurant that cost him all his savings and several loans he can no longer repay. He said he cannot risk a third demolition and is considering leaving the area altogether.

“Everyone has a certain amount of pain and pressure they can handle, I think I’ve surpassed mine,” Qissiyieh said with a shake of his calloused hands. “I’m tired, I can’t play this cat-and-mouse chase anymore.”