As Palestinians commemorate 65 years since the Nakba, the issue of land and property is still the defining aspect of the conflict. 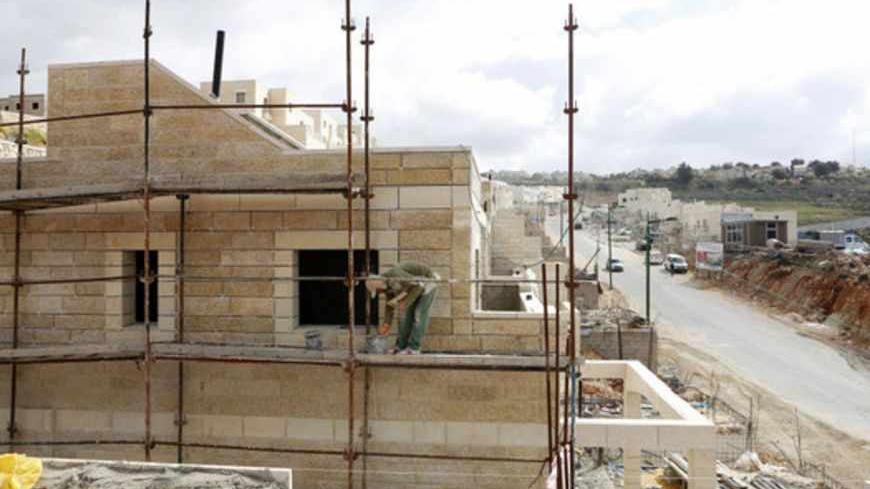 A Palestinian laborer works on a construction site in the West Bank Jewish settlement of Har Gilo, near Jerusalem, March 18, 2013. - REUTERS/Baz Ratner

Two weeks ago, Israel’s Prime Minister Benjamin Netanyahu made a statement declaring that the crux of the Palestinian-Israeli conflict was not land, but his country's very existence. The timing of this unusual statement — that goes against conventional wisdom or even logic — was important: It came on the heels of an Arab League delegation declaration (or reiteration) that land swaps would be applicable should Israel agree to end the conflict based on the 1967 borders.

Suffice it to say that — had the conflict not been about land — it would be difficult to explain why millions of dollars are spent each year by the Israeli government on a settlement enterprise that has seen the number of Israelis colonizing the West Bank, including East Jerusalem, double to half a million between 1993 and today. Had land not played a monumental role in the question of how peace can ultimately be established within this thin strip of land, Israeli authorities would not have used every tool at their disposal to acquire more territory since the state’s 1948 inception.

As Palestinians commemorate 65 years since the Nakba (or the catastrophe) — where some 750,000 Palestinians were expelled or forced to flee their homes — the fact that land is at the heart of the conflict is all the more jarring. Take the question of Palestinian claims to property and land in West Jerusalem as an example. Citing a United Nations Conciliation Commission for Palestine (UNCCP) survey of Palestinian refugee property, Adnan Abdel Razik, an expert on land settlement and zoning, says Arabs owned some 33.69% of West Jerusalem’s land back in 1949. Jewish-owned land constituted 30%, while Christian missions owned some 15%. Many famous parts of West Jerusalem such as Katamon and the Greek and German colonies were once owned by Palestinians.

According to Abdel Razik, immediately after the 1948 war, Israel reclassified most “abandoned” Arab property as absentee. This act was later enshrined in law and approved by the Knesset in 1950. The Absentee Property Law stipulated the creation of the “Development Authority,” which was authorized to sell this land to the government, the Jewish National Fund (JNF) and other public agencies, in close cooperation with the Custodian of Absentee Property, which administers land “abandoned” by its owners. It is this codification of land expropriation through state policy that oversaw a vast dispossession of Palestinian property and land following the 1948 war. These laws are still utilized today by Israeli authorities to overtake individual houses, vast tracts of agricultural land and property of Palestinians in East Jerusalem and the West Bank.

Related to this is the issue of ownership claims. Jewish Israelis are allowed to lay claim to property they owned before 1948, but Palestinians do not enjoy the same privilege, says Abdel Razik. A case in point is Sheikh Jarrah, an East Jerusalem neighborhood located between Mount Scopus and the Old City. Many Palestinian families have been evicted from their homes or have received eviction orders to leave homes they have lived in for decades. Albeit a political issue, the battle for Sheikh Jarrah has become a legal one, the point of which, the Centre for Jerusalem Studies Director Huda al-Imam says, is to pepper the Holy Basin area surrounding the Old City with settlers.

Al-Imam explains that the issue can be traced back to 1956, when the United Nations Relief and Works Agency (UNRWA), in cooperation with the Jordanian government, gave 28 Palestinian refugee families land on which to build homes. The agreement included a promise to provide these families with property deeds within three years in exchange for their refugee ration cards. The families never received the deeds and after the 1967 war and Israel’s occupation of East Jerusalem, settlers began to target these families, claiming ownership by resorting to documents that soon became the legal basis on which Palestinians were expelled from their homes.

Two settler groups in particular — the Sephardic Community Committee and the Knesset Israel Committee — sought ownership using a Tabo (Ottoman word for deed) dating back to the early 19th century. The deed was eventually ruled of “uncertain authenticity,” but by that time an Israeli court ruled that it was too late and four Palestinian families had already been evicted. The case begs the question: If Jewish owners can take back property they claim to have owned before 1948, shouldn’t Palestinians also lay claims for reconstitution of their properties, including those in West Jerusalem?

Rifka al-Kurd is living this nightmare. Her son was the first to lose his Sheikh Jarrah house to Israeli settlers. Now he lives with his 89-year-old mother, his wife and five children. His house was barely a stone’s throw away from his mother’s, which is now being threatened with eviction. The only thing that separates their house from the one occupied by the settlers are two thick woolen blankets hung on a clothesline. The settlers’ house is so heavily boarded up that it is hard to tell if anyone even lives there. The only thing that peers out is an Israeli flag hung to cover an entire window.

As is the case with many Palestinians, Rifka’s tale begins in 1948, during which her family lived in Haifa, but was ultimately forced to flee to Amman, then Jericho, before finally settling in Jerusalem. Her family is one of the 28 families who were given a plot of land to build on back in 1956. A year ago, she received an eviction order, which she tells me, has left her family living in turmoil and uncertainty. She fears that she will — once again — be forced to leave, like she did in 1948.

In addition to using the legal system for land expropriation, Israeli authorities have supported the entrenching of the settlement project in the West Bank and East Jerusalem. This reality is especially stark in the village of Al Walajeh, which prior to 1948, was linked to Jerusalem in all aspects of life (economy, public services, family ties). Today, more than 75% of its residents live in exile, says AbdelRahman Abu Teen, head of the village council, and it is effectively severed from the holy city. Al Walajeh has been fragmented and dissected so many times since 1948, it is hard to count says Abu Teen. In 1967, the village was divided again, parts of it coming under the rule of the Israeli military authority and others annexed after the municipal boundaries of Jerusalem were redefined.

In 1995, the village, like many others in the West Bank, was divided into Areas A, B and C, as defined by the Oslo agreement. Most of Al Walajeh was classified as Area C, which meant Israel controlled it fully (security control, in addition to zoning and civil services), while the rest was designated as Area B, with Israeli authorities retaining security control over it while the Palestinian Authority (PA) had administrative control. More of Al Walajeh’s land was confiscated after Israel approved a plan to reroute the wall near Jerusalem in 2006, and again in 2010 after its construction resumed in the adjacent Beit Jala area.

The village residents have also lost a large chunk of their land to settlements — Gilo, Har Gilo and today there are plans to build Givat Yael. Abu Teen, who was born in 1948, recalls that the village had dozens of orchards and more than 20 water springs. As he gestures toward remnants of an old house belonging to one of Al Walajeh’s original families, half a dozen young settler boys jump into a spring close by.

“We feel hopelessness and despair,” Abu Teen says. “All we can do is dream of going back to the place we used to live.”

Dalia Hatuqa is a contributing writer for Al-Monitor's Palestine Pulse. A print and broadcast journalist based in the West Bank, she writes about politics, the economy, culture, art and design. Her work has appeared in The Atlantic, Foreign Policy and the Christian Science Monitor, and she is a regular contributor to The Economist's Prospero blog, Al Jazeera and The National (UAE). On Twitter: @daliahatuqa