A day before the arrival of US Secretary of State John Kerry to the region, Israel's Supreme Court will rule on the eviction of a Palestinian family in East Jerusalem. 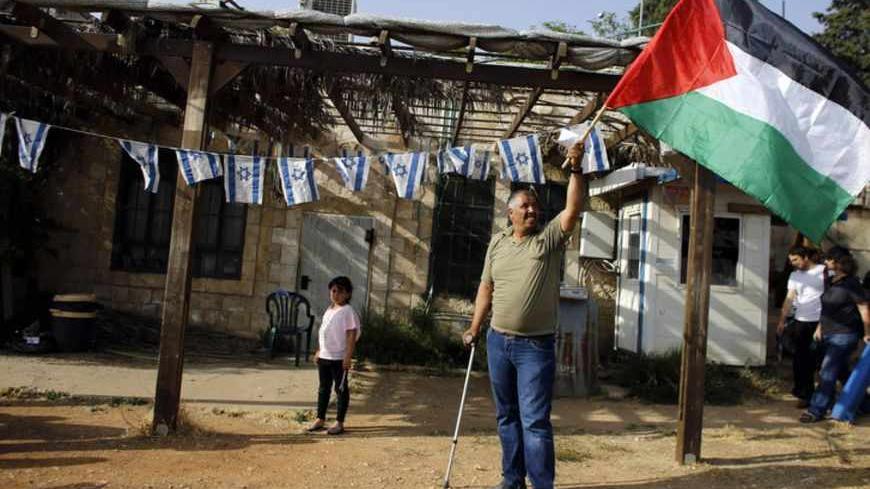 A Palestinian protester waves a Palestinian flag in the Sheikh Jarrah neighborhood of East Jerusalem, May 17, 2013, during a weekly demonstration against Jewish settlements and the possible eviction of a Palestinian family from their home. - REUTERS/Ammar Awad

Secretary of State John Kerry, scheduled to arrive in the region on May 21, is sparing no effort to thaw the thick ice between Prime Minister Benjamin Netanyahu and Palestinian President Mahmoud Abbas (Abu Mazen). As previously reported by my colleague Shlomi Eldar, Kerry has found a “magic bullet” which, he hopes, will enable him to announce resumption of the diplomatic process based on the 1967 borders and land swaps. Kerry is trying to persuade Netanyahu to propose a package of goodwill measures to his Palestinian counterpart, such as a partial construction freeze in the settlements and the release of several hundred Palestinians jailed in Israel for ''security-related offenses.'' But one decision by the Supreme Court, due to be rendered in Jerusalem on May 20 — just one day before the secretary’s scheduled arrival — could set the territories on fire and quash his efforts.

If Israel's highest judicial authority adopts the December 2012 ruling of the Jerusalem District Court, 79-year-old Ayoub Shamasneh, his wife Fahima and their six children will be evicted from their home and thrown into the street. The ramshackle abode, located in the heart of the Sheikh Jarrah neighborhood of East Jerusalem, will be taken over by right-wing Jews who, as is their habit, will fly an Israeli flag over the building. Even more serious is that a Supreme Court rejection of the Shamasneh family’s appeal will likely result in a new wave of “eviction and occupation” of dozens of houses in the East Jerusalem neighborhood, named by the settlers Shimon Hatzadik [Shimon the righteous], after a four-year lull. Such a wave could turn US peace efforts into a fleeting memory and sidetrack the conflict, turning it instead toward the 1948 narrative and the dead-end issue of the right of return.

Right-wing Jews have been claiming that the Shamasneh family’s house, just like most of the adjacent ones, was built on lands owned by a Jewish family until the 1948 War of Independence. After the war, while the Israeli government was settling Jews in the homes of Palestinians in the western part of Jerusalem, the Jordanian government was renting out Jewish property in the eastern part of the city to Palestinian refugees.

After Jerusalem was conquered in June 1967, the administration of these properties was handed over to Israel’s Custodian of Absentee Property, who renewed the rental agreements with the Palestinian tenants. But, according to a law passed by the Knesset in 1970, the Custodian is required to turn over properties to their Jewish owners whenever they ask. Nonetheless, a tenant protection law grants immunity from eviction to Palestinians who have lived in their houses since before 1968. The Shamasneh family, like eight or nine other families evicted in recent years from their houses in the neighborhood, was unsuccessful in proving to the court that it had been living in the house since before the relevant date, or in providing its contract with the Jordanian Custodian of Enemy Property. By the way, several of those evicted families have ownership certificates for spacious houses in the western part of Jerusalem, but Israeli law does not grant them the right to reclaim their homes and throw the tenants out into the street.

A ruling against the Shamasneh family will provide Hamas with ammunition to fight the Arab Peace Initiative, which Hamas rejects because it ignores the issue of the right of return of Palestinian refugees. What will Abu Mazen tell Hamas when it asks why he is willing to cede the rights of Palestinians to return to their homes in West Jerusalem, while Israelis are being handed back their homes in East Jerusalem? Hamas will, obviously, not miss the opportunity to present the [right-wing] settlers' takeover of Sheikh Jarrah as a plot to disrupt Palestinian continuity between the Old City of Jerusalem and the Palestinian neighborhoods to the north. And this as part of a “grand plan” to split the West Bank in two, in the center of which will be located E1 neighborhood between Jerusalem and Ma'ale Adumim.

The fact that the Shamasneh family’s eviction notice, like those of other families, was obtained in collusion with the Justice Ministry’s Custodian of Absentee Property could well reinforce the suspicion that a guiding diplomatic hand is stirring this steaming cauldron from up high. The fact that the legal firm representing the settlers also represented the State of Israel in the Shamasneh trials only serves to give credence to those suspicions.

Does the Israeli government have the power to stop Aryeh King (ranked 4th in the Otzma LeYisrael party, headed by avowed Kahane supporter Michael Ben Ari, which ran in the last elections), who is lining up the Jewish landlords for the struggle over Sheikh Jarrah? Does the prime minister have the authority to overrule court decisions if the Supreme Court rejects the Shamasneh family’s appeal and orders the house to be handed over to its Jewish owners?

The answer to these questions rests with Attorney General Yehuda Weinstein. If he carefully peruses the correspondence files in his office, he will find a letter written several years ago by his predecessor, Meni [Menachem] Mazuz, to Jerusalem lawyer Daniel Zeidman, regarding the right-wing Jewish millionaire Irwin Moskowitz. Moskowitz is a magnate living in Florida who has decided to settle Jews in the heart of the East Jerusalem neighborhood of Ras al-Amud. Mazuz wrote that the government “must maintain its right to act freely, at such a diplomatically sensitive time, and to prevent a single individual, and especially a foreign national, from dictating moves with far-reaching diplomatic implications.” He added that it’s inconceivable that the government is authorized to expropriate land in order to conserve antiquities or to plant a forest, but is not authorized to expropriate land out of diplomatic considerations.

Zeidman told Al-Monitor that if it was possible for Israel to expropriate 35% of private Palestinian lands, over time, in order to build 50,000 housing units for Israelis only, there’s no doubt it can expropriate several dunams [about one acre] in order to maintain public order and preserve the nature of a Palestinian neighborhood. He also noted that the government of Israel did not allow even a single Palestinian family to live in the Jewish Quarter of Jerusalem’s Old City.

Michael Ben-Yair, who served as attorney general in the days of the Yitzhak Rabin government and has been active in recent years in preventing settler takeovers in Sheikh Jarrah, supports the contention that an individual’s property rights do not take precedence over the interest of public safety. He recalls that in the 1980s, then-Finance Minister Igael Hurvtiz ordered the scrapping of a plan to build a business center on the grounds of the Hassan Bek mosque on the Tel Aviv-Jaffa border and even demanded that it be rehabilitated so as not to hurt the feelings of the Muslim minority. The current finance minister, Yair Lapid, would do well to take notice.

During his first term as prime minister, Benjamin Netanyahu ordered the eviction of the settlers from Moskowitz’s compound in Ras al-Amud, fearing riots would break out in East Jerusalem. According to the explanation he provided, his decision served the unity of “the holy city,” national unity and also “the continuation of the diplomatic process.” Prime Minister Benjamin Netanyahu should take heed. Netanyahu based his decision at the time on the opinion of then-Attorney General Elyakim Rubinstein, who is currently serving as a Supreme Court justice. This is the same court that is now charged with determining whether the eviction of a Palestinian family from its home in Sheikh Jarrah will serve the diplomatic process.