Security officials and European diplomats all warn of the volatile situation in Jerusalem, where the government continues its occupation policy and discrimination of Palestinian residents in contradiction with international law. 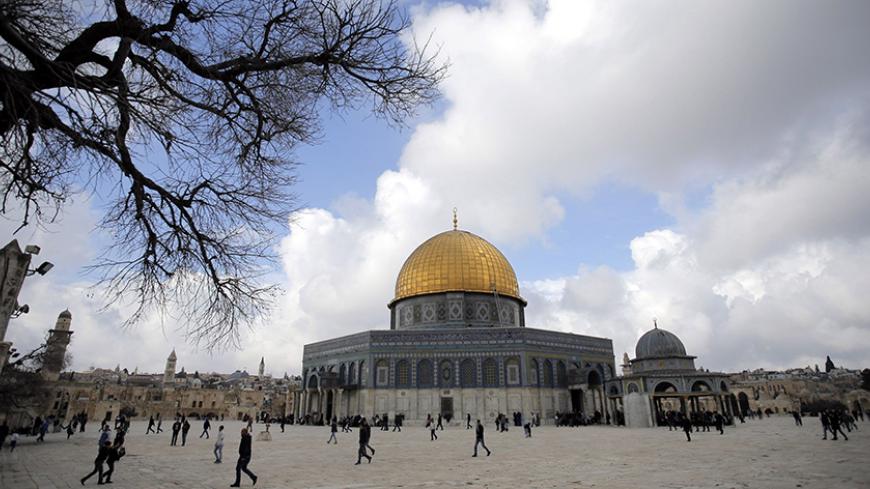 Palestinian worshippers walk past the Dome of the Rock on the compound known to Muslims as Haram al-Sharif and to Jews as Temple Mount in Jerusalem's Old City, Jan. 16, 2015. - REUTERS/Ammar Awad

In the heart of the Muslim Quarter of the Old City of Jerusalem lies the home of the Sub Laban family. From the doorway one can see the golden dome of Al-Aqsa Mosque, bright and shiny, almost within touching distance. Yet the family members are shuttered inside. They’re afraid police forces and judicial emissaries could show up any minute and forcibly remove them from the place they have lived since the early 1950s. After 35 years of legal battles, an Israeli court ruled that the family has lost its rights and no longer qualifies as a protected tenant. After they’re evicted, the key will be handed over to representatives of the Ateret Cohanim settler organization, marking another achievement in its bid to Judaize East Jerusalem.

The Shamasneh family of the Sheikh Jarrah neighborhood is also living on borrowed time. Here, too, the law regulating the trusteeship of property owned by absentee landlords, which allows claims for property owned by Jews before 1948, serves the political aims of the settlers’ organization. The discriminatory Israeli law, which allows Jews to claim the property they were forced to leave in 1948 but bans Arabs from doing so, faithfully serves those wishing to display sovereignty over all parts of the holy city (and country). If the eviction is carried out, it will be the first time since the start of the protest in Sheikh Jarrah five years ago, which generated international interest and resonated abroad, that a Palestinian family will be forced to leave its home for the benefit of Jewish settlers.

Every house handed over to the right-wing nongovernmental organizations, which enjoy government backing, increases the separation between the Jerusalem Old City and the Palestinian neighborhoods in the city’s northeast. That’s the reason Sheikh Jarrah was dubbed Jerusalem’s E1 area, after the stretch of land that lies between Jerusalem and the settlement town of Maale Adumim. E1 is designed to further cut off East Jerusalem from the West Bank, although the Palestinians consider the two a single entity. Implementation of these measures will signal the end of the two-state solution more than all the recent declarations and denials by Prime Minister Benjamin Netanyahu concerning the Bar Ilan speech and the establishment of a Palestinian state.

On March 20, The Guardian published details from a classified document compiled by the consuls of the European Union member-states in Jerusalem. The consuls note that the city has not been divided since 1967 as it has been for the past year. They warn of a vicious cycle of polarization and violence, and identify among the central causes the housing crisis in the Palestinian neighborhoods and the enforcement activity against illegal construction in those neighborhoods. A special chapter is devoted to the growing tensions on the Temple Mount (Haram al-Sharif). One of the document signatories told Al-Monitor on condition of anonymity: “Since the question of Jerusalem in an essential dimension of the two-state solution for the EU, the report expressed serious concern regarding the unprecedented level of violence and division in the city, and warned that the solution to this situation cannot be of a security nature.”

The Passover holiday starting April 3 pumps overdoses of adrenalin into the veins of the right-wing zealots, and on the other side, of Islam’s zealots. During this period tens of thousands of Jews usually visit the Temple Mount, among them guests wishing to pray at the site. In a statement issued by Students for the Temple Mount, organizers accuse the police of violent conduct toward Jews involved in a fight with Muslims at the gates to the compound. They demand that authorities “do their utmost to allow Jews to enter the Temple Mount freely, as is their right in a democratic state.”

Barring a dramatic surprise, the next Israeli coalition will have the support of 67 Knesset members, most of them right-wingers. The last election strengthened relentless Knesset members, such as Miri Regev, who pledged, among other things, to violate the status quo on the Temple Mount. In addition, HaBayit HaYehudi Party leader Naftali Bennett is demanding that the internal security ministry, which oversees the police, be entrusted to Knesset member Ayelet Shaked. Suffice it for Shaked to translate just a bit of her diatribes into operational instructions, such as deploying armed forces in the heart of Palestinian neighborhoods, for the relative calm achieved in Jerusalem after the horrifying summer months to blow up in the faces of the capital’s residents. Police reinforcements to protect radical Jews wishing to pray on the Temple Mount, the razing of Palestinian houses, new construction tenders in the settlements, capital punishment for terrorists (as demanded by Foreign Minister Avigdor Liberman) — each of these separately, and all of them together, could ignite the gunpowder barrel.

The second intifada, which the Palestinians dub the “Al-Aqsa intifada,” erupted in September 2000 in Jerusalem. The flashpoint remains as it was. The background — failure of the diplomatic process and loss of hope of freedom and economic well-being — has not changed, either. In recent days, senior military officials have sounded more and more alarms, warning of the danger of a third intifada. They have pointed an accusatory finger at the political echelon, which decided to punish the Palestinian Authority (PA) for joining the International Criminal Court in The Hague by freezing the tax revenues that Israel collects on its behalf. The resulting cut in salaries of PA employees only increases the unrest on the Palestinian street against the PA and threatens its security cooperation with Israel.

A senior European diplomat told Al-Monitor that “by freezing the tax money you are shooting yourself in the leg.” In the member states of the donor conference for the Palestinian people, AHLC, there is growing criticism of the freeze of Palestinian funds. This, at a time when taxpayers in those states are helping an imaginary peace process. Al-Monitor has learned that after the new government is sworn in, and perhaps even beforehand, these states will reassess their policy.

The impending evictions in the Palestinian neighborhoods and the entry of settlers into these buildings constitute a test of the international community’s determination. Will the states of the European Union heed the recommendations of the consuls and adopt a series of steps, including restrictions on violent settlers and on the purchase of goods manufactured in the settlements?

Al-Monitor has further learned that following the deterioration of the situation in Jerusalem, discussions were held recently among senior international officials regarding the need to remind and to stress that East Jerusalem is part of the occupied territories and that its annexation contravenes international law. One cannot be certain that this measure will cause the Israeli side to treat the idea of turning East Jerusalem into the capital of Palestine more seriously. At most it will make the settlers laugh all the way to the home of the Sub Laban family, whose members will be thrown out into the street, and also amuse the pyromaniacs on the Palestinian side of the conflict.