Most Israelis, Palestinians are tired of fighting

Israeli right-wing legislators do all they can to keep the two-state solution at a distance, yet a majority of Israelis still support it. 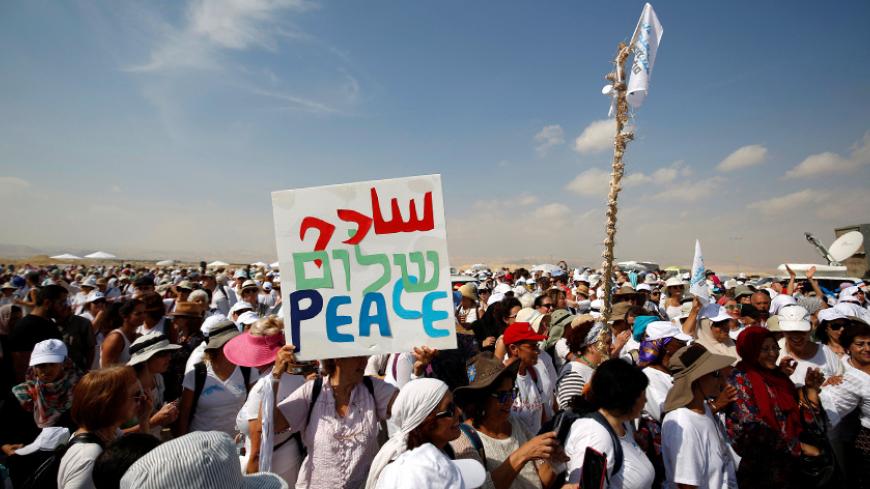 Israeli and Palestinian demonstrators take part in a rally in support of peace near the West Bank city of Jericho, Oct. 19, 2016. - REUTERS/Mohamad Torokman

Jared Kushner, the man entrusted by the president of the United States with reviving Israeli-Palestinian peace negotiations, admitted this week that he had no idea how to do it.

“Everyone finds an issue” that blocks progress, the Trump son-in-law and senior White House adviser complained in a closed-door meeting with a group of congressional interns July 31. He suggested that instead, “let’s focus on, how do you come up with a conclusion to the situation." True, there are those who specialize in finding “issues,” but the people undermining the solution to the “situation” are those who invent problems where none exist. Thousands of words have been written about the diplomatic implications of the Temple Mount metal detector problem invented by Prime Minister Benjamin Netanyahu (the detectors were placed at the site after the July 14 attack on Israeli police officers). People say that once bitten, twice shy. Netanyahu is among those who once bitten rushes into the lion’s den — or, in this case, East Jerusalem. Unfortunately for him and for us, there is no trained, experienced handler to save him and us from this trouble.

The newbie negotiator told the interns that he had read enough books and did not require a history lesson on the conflict. Kushner would be well advised to add to his reading list the record of a July 26 Knesset debate, which would instruct him on another “issue” Netanyahu is inventing under his very nose. If Kushner did not fall asleep during the lesson on the role of Jerusalem in the Israeli-Palestinian, Jewish-Muslim conflict, then after reading the record he should either ask his father-in-law for permission to twist Netanyahu’s arm or hand Trump back the peace mandate. If anyone needed additional proof that Netanyahu and his friends had put the kibosh on the 1993 Oslo Accord on Israeli-Palestinian peace, the proposed legislation approved in a preliminary vote at the end of that Knesset debate can serve as the epitaph on the tombstone of that agreement.

Following are excerpts from the Knesset debate that preceded the vote at a first reading (the proposal would need extra readings and proceedings before being adopted) on an amendment to the Basic Law on Jerusalem. The amendment raises the majority required to approve relinquishing parts of Jerusalem to Palestinian control from 61 Knesset members, out of 120, to a special two-thirds (80) majority. Zeev Elkin, the minister in charge of Jerusalem affairs, said, “This law is designed to strengthen the status of a unified Jerusalem as the capital of Israel and to make it harder in the future for any government to undermine that unification, God forbid, and to hand over parts of the city to foreign sovereignty.” Elkin then turned to the Arab members of the legislature, who had warned that the bill would deal a deadly blow to prospects of resolving the dispute over the city that both sides claim as their capital, and of a resolution to the overall conflict. “You have reason to fear this bill and not to want it,” the minister said in a clear attempt to provoke the representatives of the Arab minority. “And that is exactly the reason we support it.”

The Knesset also approved at a first reading an amendment to the same basic law, enabling the administrative transfer of more than 100,000 Palestinians currently under the jurisdiction of the Jerusalem municipality, to the jurisdiction of a new, separate municipality. These are the residents of near-Jerusalem Kafr Akeb village and Shuafat refugee camp. Both neighborhoods are located outside the separation fence (on the West Bank side), but belong to the Jerusalem municipality.

On the same day, the prime minister instructed Knesset member Yoav Kish of the Likud to push forward proposed legislation expanding the municipal borders of Jerusalem, while reducing its Palestinian population. The “Greater Jerusalem” Law would redraw the borders to include West Bank settlements Ma’aleh Adumim, Betar ilit, Givat Ze’ev, Efrat and the Etzion settlement bloc, all of them currently outside sovereign Israeli territory.

Kish wrote on his Facebook page that the bill was intended to increase the Jewish majority in Jerusalem. “They want to divide Jerusalem,” he wrote in an obvious reference to left-wing Israelis, whom Netanyahu accused in 1997 of forgetting that they are Jews. “We want to strengthen it — without giving a single grain of land to the Arabs.” But even that is not enough. On Aug. 9, a large police force is scheduled to evict the Shamasneh family from its home in the East Jerusalem neighborhood of Sheikh Jarrah (following a 2013 court order siding with settlers claiming ownership). Peace activists told Al-Monitor that the eviction notice against the Palestinian family signals a decision by authorities to renew the tide of Jewish settlement in the neighborhood, suspended several years ago under international pressure.

One can only hope that envoy Kushner reads the findings carefully. He will find there the hint to locating the treasure that his father-in-law sent him to seek: Most Palestinians are sick of fighting. At the same time, the question of which flag will fly over the Temple Mount interests most Israelis like the snows of yesteryear on Mount Everest. Perhaps there is something to what Knesset member Dov Khenin of the Arab Joint List said at the Knesset plenary debate on the provocative Jerusalem Law — that Jerusalem had become a sanctuary for the corrupt.