A Roman Catholic church has lost its seven-year battle to keep the Israeli wall off its property, writes Daoud Kuttab. 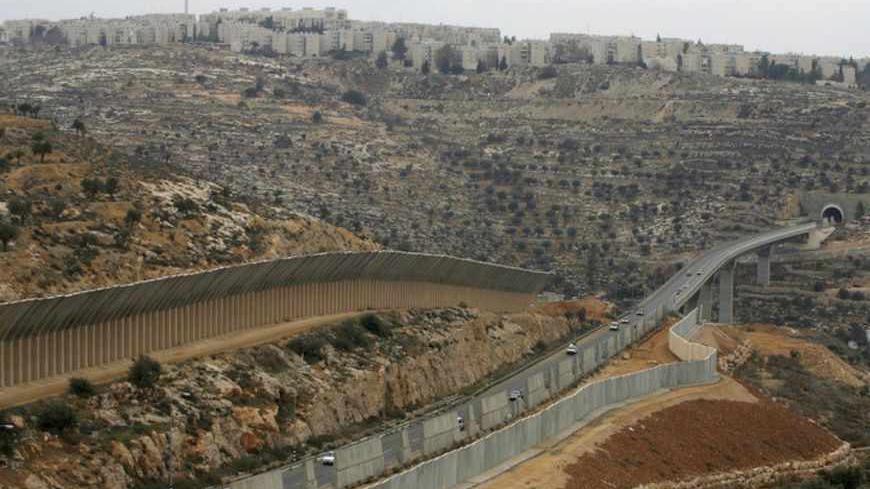 A view of Gilo, a Jewish settlement on land Israel captured in 1967 and annexed to its Jerusalem municipality, is seen from the West Bank town of Beit Jala, Jan. 16, 2011. - REUTERS/Baz Ratner

After a seven-year legal battle, the Silesian nuns convent located in the Palestinian town of Beit Jala lost an appeal on April 24 against the building of the Israeli wall on its land. The latest route of the wall will place the convent on the Palestinian side of the wall, and its companion Cremisan Catholic monastery on the Israeli side. It will also take up most of the Church’s lands as well as that of 58 families, most of them Palestinian Christians.

According to a news release issued by the human rights organization that joined the lawsuit, the Israelis will place an agricultural gate that will be open at certain times of the year to allow the Church to tend its land. For decades, the Cremisan monastery has produced wine [from grapes] grown in the Cremisan Valley. Reports from Palestinian officials note that the latest decision will deny Palestinians the only remaining green area. Bethlehem city officials say that as a result of the 47-year- old occupation of Palestinian lands, the city has been dramatically shrunk from its original size.

The Society of St. Yves, a Catholic human rights organization working in Jerusalem, said that while they rejected the existence of the wall they were successful in getting the wall rerouted to keep the convent buildings that service the local population on the Palestinian side of the rerouted wall. The Israelis have declared that they will be flexible in issuing permits to Palestinians to farm their lands on the other side of the concrete wall.

Unlike other routes of the Israeli wall which has been declared illegal by the International Court of Justice, the route around Bethlehem is cutting off Palestinians from East Jerusalem, which is an occupied city, despite the unilateral Israeli annexation of that city.

A PLO statement on the status of Bethlehem says that there are 22 settlements on Bethlehem’s land, including four that effectively disconnect occupied East Jerusalem from Bethlehem (Gilo, Har Homa, Giva’t Hamatos and Har Gilo). Additionally, an additional settlement, Giv’at Yael, is planned to link Gilo with Har Gilo. “This planned settlement will be constructed on land from Beit Jala and wallajeh. Together with the wall and a system of bypass roads for exclusive Israeli settler use, confiscation of land, and movement restrictions on Palestinians, these illegal actions have completely encircled the Bethlehem District and shrunk it to barely 13% of its original size. “

Other facts and figures connected to the issue were issued by the PLO negotiating team. It includes:

• Israel illegally confiscated around 22,000 dunums of land (22 square kilometers [8.5 square miles]) or roughly the size of the country of Nauru. This confiscated land was used to expand the illegal settlements of Gilo, Giv’at Hamatos and Har Homa.

• Most affected land owners are Palestinian Christians from Bethlehem, Beit Jala and Beit Sahour in addition to Churches from various denominations.

• Israel illegally annexed 18,000 dunums [4.500 acres] of Bethlehem land in its unilateral and illegal expansion of the Israeli  Jerusalem municipality.

• Built on Beit Jala land, the illegal settlements of Gilo and Har Gilo are among the fastest growing Israeli settlements.

Israel’s illegal settlements in Bethlehem occupy the most vital lands for the development of ancient Palestinian communities, including those essential to maintaining the centuries-old relationship with Jerusalem. In fact, most of the new illegal settlement housing units, wall construction and land confiscation announced in the second half of  2011 are located in these areas.

This plan will devastate 58 Palestinian Christian families, who will be unable to access their land, which Israel plans to have on its side of the illegal wall. Cremisan also has a kindergarten for the town’s  children, run by nuns.

The town, known for its refined olive oil, is about to lose more than half of its olive trees to the illegal Israeli wall.

As a response, the Beit Jala community has been organizing a weekly open air Mass to protest this illegal confiscation. Churches from across the world have joined the prayers, which have also attracted attention from international news media.

“Israel continues to act with impunity, but we will continue to call for justice and peace. Our weekly prayers are for peace, with no provocations or insults; we are just calling for peace while celebrating hope. But for peace to happen, justice must come first. Church leaders should turn their concerns about Christians from the Holy Land into real action,” said Father Ibrahim Shomali, the Roman Catholic priest of Beit Jala.

Israeli occupation forces issued orders to seize land from the sisters to build the separation wall between Israel and the West Bank. In all contacts with the army the sisters said clearly: “We don’t want the wall at all, neither on our right side nor on our left side, not in front of the convent nor behind it.

"We want to build bridges, not walls. We are committed towards education for justice, peaceful living and peace between all peoples without distinction,” says Sr. Fides, the directress at Cremisan.

Editor's Note: A previous version of this article stated that it was the monks who brought the lawsuit instead of the nuns. It also claimed that all church buildings would be on the Palestinian side of the separation wall. In fact, the convent will be on the Palestinian side while the monastery will be on the Israeli side. Further it is the monastery and not the convent that produces wine. These errors have been corrected.

Daoud Kuttab is a contributing writer for Al-Monitor's Palestine Pulse. A Palestinian journalist and media activist, he is a former Ferris Professor of journalism at Princeton University and is currently the director general of Community Media Network, a not-for-profit organization dedicated to advancing independent media in the Arab region. Active in media-freedom efforts in the Middle East, Kuttab is a columnist for The Jordan Times, The Jerusalem Post and The Daily Star in Lebanon. He tweets from @daoudkuttab.