The fight over land in the predominantly Christian Palestinian town of Beit Jala has been fought on the ground and in the Israeli courts for years, with Christian leaders at the head of Palestinian efforts. 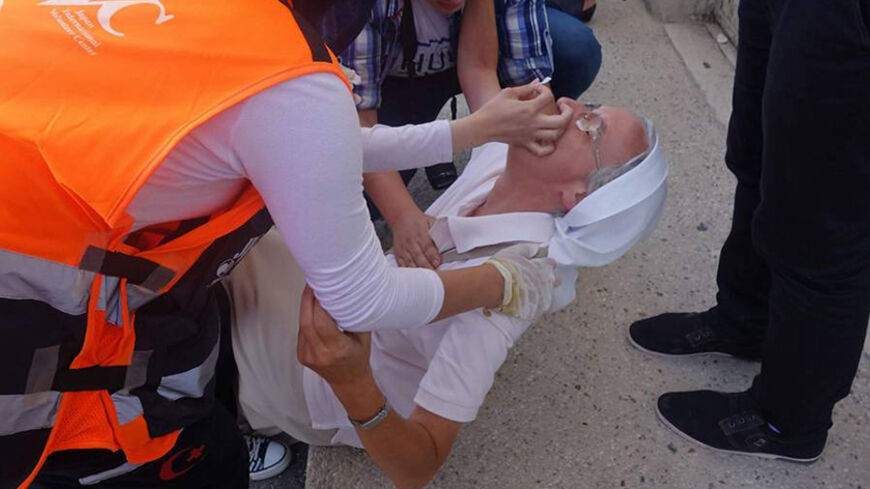 The picture posted by Deacon Fadi Abu Sa’ada on his Facebook page Aug. 30 spoke volumes, and the image of medics helping a nun injured by Israeli tear gas raised anger among Palestinians.

Demonstrations after Sunday mass have become the norm in this Bethlehem-area town. The anti-Israel rallies are a protest against Israeli efforts to confiscate property to make room for the wall. The Israeli wall, cutting deep into Palestinian land, is said to have a security aim — to protect Israel — but in fact it is dividing land that belongs to Palestinian Christians. While Israel unilaterally annexed East Jerusalem, for Palestinians, the land on both sides of the wall belongs to them.

The protest rally in the Beit Jala neighborhood of Beir Ona began peacefully but soon turned into clashes between Palestinian civilians and church leaders on one side and Israeli soldiers on the other.

The protest was led by a revered church leader, Patriarch Michel Sabbah. Sabbah, the former head of the Latin Patriarchate of Jerusalem, made an impassioned public plea for an end to Palestinian land confiscation by Israel: “This is our land, and will always remain ours. They claim it’s their land, but they use their soldiers, their tanks, their military occupation to force their will — and it is not their land. It is our land, and one day their forces will withdraw and the land will return back to its indigenous Palestinian owners.” The patriarch concluded by saying that his message to the Christian world, the international community and the Arab world is that “This Holy Land is burning.”

Bassam Shweiki, a local reporter who has been following the case, told the International Middle East Media Center that the demonstration focused on the confiscation of about 3,500 donums (865 acres) of Palestinian land dotted with ancient olive trees, some of them dating back to the days of Jesus.

The battle for the land in the predominantly Christian Palestinian town of Beit Jala has been fought on the ground and in the Israeli courts for years. It began with the battle between the Catholic Church and the Israeli authorities regarding the wall’s division of the Monastery of the Selsian Nuns and the Cremisan Latin Monastery. The path of the wall had divided the monastery and would have prevented Palestinian access to certain parts of the church. The Israeli court finally agreed to divert the wall’s path away from the monastery but did not detail (until the bulldozers came) where they decided to reroute it.

The Israeli High Court ruled on April 2 that the military must stop its attempts to build the wall on church property. However, the court reversed its decision on July 6, arguing that its earlier decision referred only to an area of a few hundred meters alongside a monastery in the Cremisan Valley.

Four days before the Aug. 30 demonstration, a 15-member delegation — including representatives of France, Germany and Sweden — visited the site. The visitors received a detailed briefing on recent legal developments by the Society of St. Yves Catholic Center for Human Rights.

The Sunday protests aimed to highlight the arbitrary nature of the Israeli actions. Despite high-profile demonstrations and legal efforts, the 58 Palestinian landowners whose lands are threatened have no idea what the new route of the wall will be. Lawyers working with the Society of St. Yves for the landowners told Al-Monitor that attempts to force the Israeli authorities to reveal the path of the wall have failed to yield results. It appears that the Israeli military, having lost one battle in the courts over the path of the wall near the monastery, is now reluctant to provide the Palestinians with any information they can use in the Israeli judiciary system.

Palestinians are hoping that their public protests will produce the kind of international outcry that can put a stop to the continuous Israeli efforts to take over Palestinian lands for the sake of a wall that will cut off Palestinians in the West Bank from those in East Jerusalem.

The image of the nun being treated for her injuries is unlikely to make the front pages of international media outlets, but the persistent support of the Palestinian community for local church leaders seems likely to ensure that the issue of Israeli aggression against Palestinian lands continues to be a priority for local Christians.