Christians made up about 25% of Jerusalem's population back in 1922, but today they number only 2% of the population. 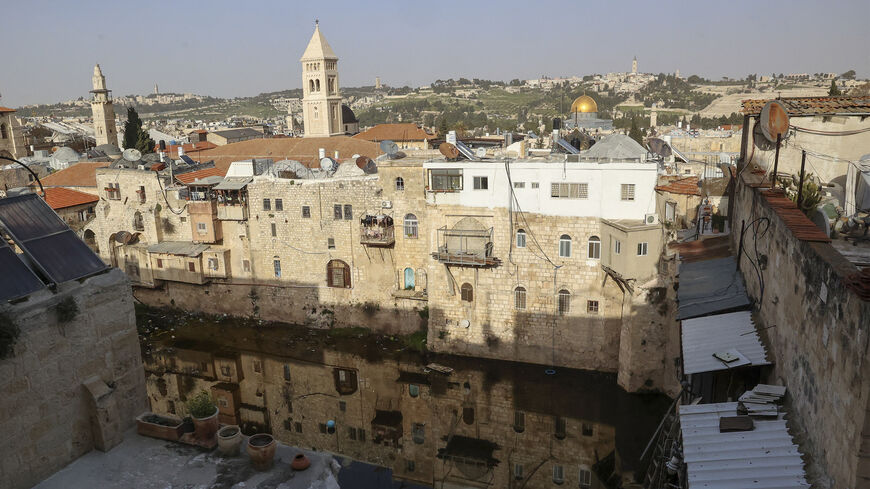 A view from the Petra Hotel at the Jaffa Gate area in Jeruslalem's Old City shows the Dome of the Rock Mosque in the Al-Aqsa Mosque complex in the distance on March 29, 2022. - HAZEM BADER/AFP via Getty Images

GAZA CITY, Gaza Strip — Israeli settlers affiliated with the Ateret Cohanim settler organization broke into the Petra Hotel, which is owned by the Greek Orthodox Church, on March 27, in an attempt to seize the premises. A small group remains in control of part of the premises, claiming to have documents proving their ownership of the hotel. The church says the documents are forged and has filed a complaint with the Israeli courts, demanding the settlers be expelled.

Representatives of Jerusalem's Christian communities organized a vigil March 29 to protest the hotel occupation. During the vigil, Greek Orthodox Patriarch of Jerusalem Theophilos III described the settler organization as “an extremist group that practices criminal activities and acts as if it is above the law.”

Wadih Abu Nassar, a spokesperson for the Council of Patriarch and Heads of the Churches of the Holy Land, told Al-Monitor that Jerusalem's Christians are living with increasing anxiety due to political and economic pressure that is pushing them to emigrate. He said many Christians are fleeing the Holy City amid the escalating conflict between Palestinians and Israelis, who have been targeting Jerusalem's Christian presence. He added, “Christians used to make up about 25% of the population of Jerusalem in 1922, but today they barely represent 2%.”

The Christian community in Jerusalem includes Latins, Greek Orthodox, Roman Catholics, Syriacs, and Armenians. The populations are concentrated in the Old City, Beit Hanina in the north, Beit Safafa in the south, and the neighborhood of al-Tur in the city center.

Abu Nassar explained that the political stalemate in the Israeli-Palestinian peace process made Christians feel they had no future, prompting many of them to pack up and leave the city.

Hatem Abdel-Qader, secretary-general of the Islamic-Christian Committee to Support Jerusalem and Holy Sites, told Al-Monitor that a 1922 census counted slightly more Christians than Muslims, "with Christians numbering about 14,000 and Muslims 13,000.” He added, “In a 1945 census, the city had a Christian population of about 30,000,” he added.

Abdel Qader explained that after 1947, the Christian numbers decreased dramatically in the wake of UN Resolution 181, which divided Palestine between Arabs and Jews. About 50% of west Jerusalem Christians lost their homes after the declaration of the State of Israel in 1948. In 1967, Israel confiscated about 30% of the land owned by Christians in east Jerusalem, he said.

Father Atallah Hanna, the archbishop of Sebastia from the Greek Orthodox Patriarchate of Jerusalem,  told Al-Monitor, “The Christian presence is deeply rooted in Jerusalem, as the most important holy sites in Christian history can be found here.”

Jerusalem is home to 95 churches, most notably the Church of the Holy Sepulcher in the heart of the Old City of east Jerusalem. It is considered the holiest Christian site as it is believed to house the tomb of Jesus.

Hanna said that the main reason behind the decreasing numbers of Christians in Palestine in general and Jerusalem in particular “is the Israeli occupation that has been targeting Palestinians, since the Palestinian Nakba in 1948 until the present day.”

On Dec. 16, 2021, patriarchs and heads of the churches in Jerusalem issued a joint statement on the “current threat to the Christian presence in the Holy Land,” stating, “In all parts of the city of Jerusalem, Christians have become the target of repeated and continuous attacks by extremist groups,” and “Since 2021, there have been countless physical and verbal attacks against priests and other members of the clergy, not to mention attacks on Christian churches, vandalism and desecration of holy sites as well as constant intimidation of local Christians who simply seek to carry out their rituals freely and go about with their daily lives.”

It went on, “The extremist groups have been relentless in trying to obtain strategic ownership in the Christian area in a bid to reduce the Christian presence.”

On Dec. 22, 2021, the Israeli government called the statement “baseless,” saying it distorts the Christian community in Israel.

Hanna explained that the statement was prompted by the Ateret Cohanim settler organization's continuing efforts to acquire three properties belonging to the Greek Orthodox Church in the Old City of Jerusalem, including the Imperial and Petra hotels.

“The settlers’ attacks on churches and clerics for racist and religious reasons are ongoing. They continue to set fire to churches, writing racist slogans on their walls, beating and insulting clerics,” he added.

Hanna explained, “Sometimes the Israeli police arrest the perpetrators, but most of the time they get away with it. We do not feel that there is enough effort on the part of the police to prevent these crimes against the Christian community and its sanctities.”

The Christians, many of whom work in the tourism sector, have suffered great losses over the decades due to the decline in foreign tourism in Jerusalem.

Nabil Emil, a Christian Palestinian who owns a shop that sells traditional handicrafts and tourist photographs in the Old City of Jerusalem, told Al-Monitor, “Tourism is constantly declining here due to the ongoing confrontations between Palestinians and Israeli forces in the city’s streets.”

He added, “Also, Israel imposes high taxes amounting to 40% of the merchants’ revenues, causing many shops to close down their doors and prompting Christian merchants to emigrate.”