As the Israeli-Palestinian peace process is stalled and the Israeli right-wing government is working to expand settlements, Jerusalem-based churches find themselves once again in the spotlight with talks about them selling lands to Israel. 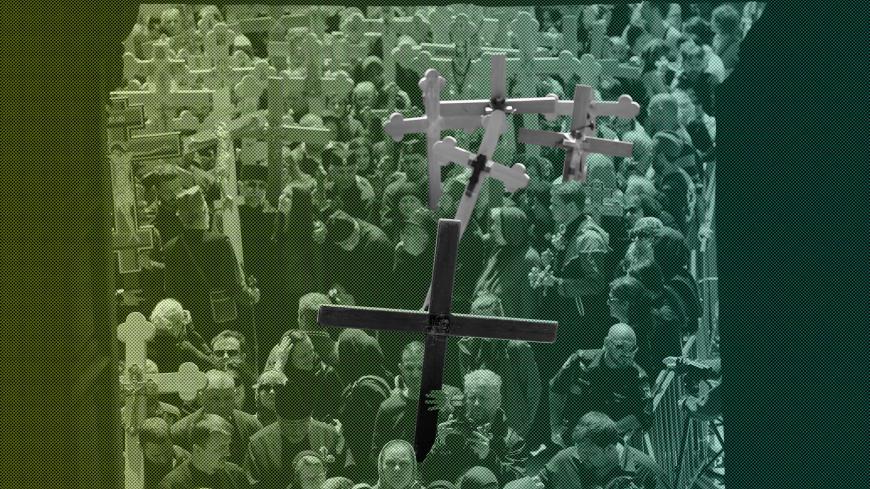 Worshippers carry crosses during a Good Friday procession as they enter the Church of Holy Sepulchre in Jerusalem's Old City, April 14, 2017. - REUTERS/Amir Cohen

The absence of any progress in the Israeli-Palestinian negotiations appears to have increased the Israeli appetite for grabbing more land and strategic locations. The problem seems most acute in Jerusalem and centers on church property in the holy city.

Jerusalem-based churches issued a strongly worded statement Sept. 4 condemning what they called Israel’s attempts to change the status quo in the city. The joint statement, signed by the heads of the Greek Orthodox, Catholic, Armenian, Coptic, Lutheran and Anglican churches, reiterated the importance of governments respecting the rights and privileges of churches.

"We now find ourselves united once again in condemning recent further encroachment on the status quo. In such matters as this, the Heads of the Churches are resolute and united in our opposition to any action by any authority or group that undermines those laws, agreements, and regulations that have ordered our life for centuries,” the statement read.

Of particular interest to the churches are an Israeli court decision and a draft law, both of which affect church properties.

Hanna Amireh, a member of the PLO Executive Committee in charge of the church portfolio, told Al-Monitor that what is happening to the church properties in Jerusalem is worrisome. “For us in the Palestinian leadership, the issue of Jerusalem is an important one in terms of our aspiration for an independent state with Jerusalem as its capital,” she said.

The church statement referenced an Aug. 1 decision by the Israeli Central District Court regarding two hotels just inside Jaffa Gate as proof that the status quo is being breached. It reads, “The judgement in the 'Jaffa Gate' case against the Greek Orthodox Patriarchate of Jerusalem, which we regard as unjust, … restrict[s] the rights of the Churches over our own property, are further assaults on the rights that the status quo has always guaranteed.”

The Jaffa Gate legal case, which the church lost and has decided to appeal, involves the questionable sale by a church official, Nikolas Papadimos, without the knowledge or the approval of the patriarch. Israeli media reported on the revelation in the court case of various allegations of bribery amounts by the purchasing side to the church official in the approximately $2 million sale of two hotels at Jaffa Gate and a home in the Old City.

Ateret Cohanim Yeshiva, an Israeli right-wing extremist organization, succeeded in convincing the senior official of the Greek Orthodox Church to sell the strategically located hotels, which provide one of the nearest entrances from West Jerusalem to the Old City of Jerusalem.

Palestinians and the churches are worried that the hotels will be used to house radical Jewish settlers, who will create tensions in the largely Palestinian area inside the walls of Jerusalem.

Amireh said that the Jaffa Gate properties referred to in the church statement are strategic, noting, “In the Camp David negotiations in 2000, the issue of Jerusalem’s Holy Basin was discussed and we refused to give up on it, and that is why the hotels in Jaffa Gate are strategic for us.”

Located just inside Jaffa Gate, which is the only entrance that leads to both the Church of the Holy Sepulchre and the Western Wall, the locations have a strategic role in creating the kind of environment that will invite or disinvite visitors belonging to one side of the conflict or the other.

The Holy Basin is the area of Jerusalem’s Old City that contains the most important religious sites to Jews, Christians and Muslims.

Hanna Issa, a Palestinian Christian historian and head of the Islamic-Christian Commission in Support of Jerusalem and Holy Sites, called the Jaffa Gate case “a patriotic case.”

"[It] clearly reflects the Israeli attempts to weaken the Palestinian Christian presence in order to make the city more Jewish,” Issa said. “The issue is very difficult and requires coordinated efforts between the church leaders, Jordan and the PLO.”

Amireh feels similarly in regard to the need for coordination. “As custodian of Islamic and Christian heritage in Jerusalem, there needs to be strong efforts by Jordan to block the attempts by right-wing Jewish groups to take over Palestinian properties using 'crooked' methods.”

According to the Palestinian officials, the Israeli settlement organization had created a fake Western business entity as the purchaser of the property and had found a person within the church to induce to make the deal.

The church sued, arguing that Papadimos had no right to sell church property using a limited power of attorney and that therefore the sale is invalid. The court ruled that since money was exchanged and accepted the deal is valid.

Church leaders are also worried about a draft law being circulated in the Knesset to take over church properties. All church properties are usually sold using long-term leases, although this process is changing. Israeli Knesset member Rachel Azaria said that the aim of the law would be to protect residents living in some of these properties from money-hungry developers.

“The land ownership bill I initiated has one goal only: to protect the residents. There is a group of wealthy entrepreneurs that bought the land from the church and thousands of residents in Jerusalem can find themselves homeless, after they purchased their homes fair and square,” Azaria told the Jerusalem Post Sept. 5.

Numerous UN Security Council resolutions reject Israeli attempts to change the legal status of the city of East Jerusalem and its character. Resolution 298, passed in September 1971, clearly rejects actions by Israel toward Jerusalem. The resolution “confirms in the clearest possible terms that all legislative and administrative actions taken by Israel to change the status of the City of Jerusalem, including expropriation of land and properties, transfer of populations and legislation aimed at the incorporation of the occupied section, are totally invalid and cannot change that status.”

While churches enjoy a high degree of independence, it appears that Israel has been able to take advantage of a built-in weakness in the Greek Orthodox Church, which owns a lot of properties but is strapped for cash. Israel’s actions are completely unchecked these days with a pro-settlement Knesset and government controlling legislation and executive policies, and the peace process has proved to be ineffective in restraining Israel’s lust to control physically strategic properties in Jerusalem at the very entrance of Jaffa Gate.

A concerted Palestinian-Jordanian effort with a high degree of advocacy of the churches might be able to slow down the process to change the character of Jerusalem’s Old City since June 1967.