Church heads and officials in Jerusalem are fighting an Israeli plan to expand a national park on the Mount of Olives in east Jerusalem, where dozens of churches and Christian sites are located. 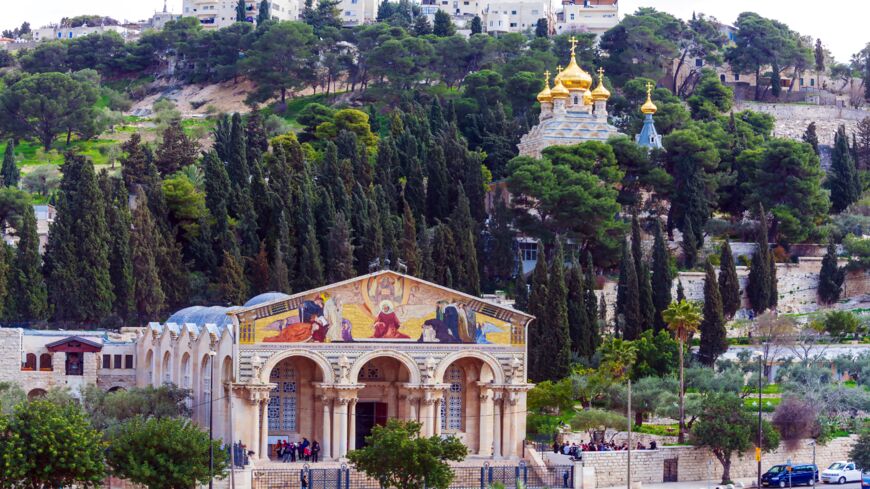 Church of All Nations and Mary Magdalene Convent on the Mount of Olives, Jerusalem, Israel. - Getty Images

In an Israeli attempt to fight the Christian presence on the Palestinian territories and deny Christians their rights and status in Jerusalem, the Israeli Nature and Parks Authority sought to implement a settlement project by expanding the Jerusalem Walls Park on church lands, located near the walls of the Old City of Jerusalem.

The move was seen as an attempt to encroach on east Jerusalem by expanding Jewish residential and archaeological projects at the expense of Muslim and Christian sites and sanctities in the city. The plan was widely condemned by church heads who sought to garner international support to oppose Israeli plans, since they were seen as a deliberate attack on the Christians of Jerusalem.

According to a report published by the Times of Israel website on Feb. 20, the Jerusalem Walls Park was opened in the 1970s. When Israeli authorities were initially demarcating the project, they avoided including a large part of the Mount of Olives, where there are more than 12 Christian historic holy sites, including the Bridgettine Sisters Monastery, Viri Galilaei Church, the Grotto of Gethsemane and the Garden of the Apostles.

After nearly five decades, Israeli authorities were considering a plan to include sensitive areas of the Mount of Olives in the park. Back then, a spokeswoman for the Israeli Nature and Parks Authority said that the goal of the project was to restore the lands in the Hinnom Valley, which had been neglected for years and faced vandalism and arson. She said that a large part of the 68 acres to be incorporated into the Jerusalem Walls Park are considered state land, according to the Times of Israel.

In light of reports about reviving the controversial plan, the Israeli Nature and Parks Authority announced Feb. 21 the withdrawal of the plan to expand the park on lands owned by churches in east Jerusalem, amid opposition from local church leaders who denounced it as a “premeditated attack on the Christians in the Holy Land.”

In this context, the head of the Christian National Assembly in the Holy Land, Dimitri Diliani, told Al-Monitor, “Among the Christian holy sites that were included in the Israeli plan to control and seize the Mount of Olives was the Tomb of the Virgin Mary, which was the last resting place of the Mother of Christ; the Church of Mary Magdalene, which was built by Russian Tsar Alexander III in 1888; and the Church of Gethsemane, also known as the Church of All Nations.”

He added, “The Israeli authorities deliberately target and intimidate non-Jews in the city of Jerusalem, in addition to targeting holy Islamic and Christian sites. Extremist Israeli groups receive direct support from the Israeli government protecting them and covering for their criminal acts against the holy sites in Jerusalem.”

Diliani pointed out that “the Israeli occupation aims to achieve one goal, which is to create an environment that rejects the presence of Jerusalemites in their own city, be they Christians or Muslims. They are all subjected to persecution and deliberate Israeli racism, to displace them from the city and turn it into a city with Jewish majority. This is the main reason behind the decrease in the number of Christians in Jerusalem and the migration from the city.”

He stressed that "the patriarchs and heads of churches in Jerusalem launched an international campaign in 2021, denouncing the ongoing and continuous attacks by extremist Israeli groups against churches and Christian residents in the city of Jerusalem, which are carried out under the protection of the Israeli police and their security services. The campaign aims at repelling the Israeli plan to expel Christians in Jerusalem and a number of other areas in the Holy Land.”

Diliani explained that “physical and verbal attacks on clergy and churches are many, and holy places are regularly vandalized and desecrated by these [extremist] groups, not to mention the targeting of properties, especially in the Christian quarter of the Old City and its surroundings, through deliberate and planned commercial deals. These deals are often marred by forgery, bribery and extortion, such as what happened with the properties of the Jerusalem Orthodox Patriarchate in Umar Ibn al-Khattab Plaza in Jerusalem, and Adhamiya House in the Muslim Quarter of the city.”

Christian leaders in Jerusalem have repeatedly warned that their communities are threatened with expulsion from the area by Israeli extremist groups, and have called for dialogue about preserving their presence.

He said that in recent years, the lives of many Christians have become “unbearable by radical local groups with extremist ideologies,” saying that their aim appears “to free the Old City of Jerusalem from its Christian presence.”

Sacred sites, including churches, have been desecrated and vandalized, and crimes are committed against priests, monks and worshippers, he said, adding, “These radical groups do not represent the government or the people of Israel. But as with any extremist faction, a radical minority can too easily burden the lives of many, especially if their activities go unchecked and their crimes are unpunished.”

He added that while Christians used to make up 20% of Jerusalem's population, today they are less than 2%. Patton appealed to the world for support "so that we can continue to preserve the rich diversity of this Holy Land.”

Khalil al-Tafkaji, director of maps at the Jerusalem-based Arab Studies Society, told Al-Monitor, “The Israeli settlement plan is not related to the issue of Islamic or Christian holy sites, as much as it is a process of Judaization and an attack on religious centers and holy sites all over the city of Jerusalem, to expel its Muslims and Christians and become solely for Jewish residents.”

He added, “The settlement project in the Mount of Olives targeted the Christian holy sites of the Orthodox, Armenian, Russian and Catholic churches, as these churches are located in most of the areas to be seized, in addition to a number of endowment and private properties. The Israeli authorities have frozen the seizure decision only to reactivate it later, just when the right time comes to implement that decision.”

Tafkaji pointed out that “the area that was declared as a park within Israel’s settlement plan is not Israeli. The park’s project is an implementation of the Henry Kendall zoning plan that was established before 1948 for the city of Jerusalem, which aims to make the western slopes of the Mount of Olives green areas that prevent Palestinian construction on them, whether these constructions are affiliated with Palestinian Muslims or Christians.”

He explained that “the targeted area includes large [Christian sites] such as the Church of All Nations, the Chapel of the Ascension, the Armenian Monastery and the Kidron Valley, which is considered one of the sacred valleys for Christians, as it separates the Mount of Olives and the city of Jerusalem. Christians believe Jesus crossed this valley more than once.”

Tafkaji indicated that “the city of Jerusalem is considered one of the most sacred areas for Christians who perform pilgrimage on the Way of the Cross, then head to the Church of the Holy Sepulcher, and finally to the Church of the Ascension. The Israeli plan is to end the Christian and Islamic presence in Jerusalem.”

In December 2020, the Church of All Nations, which is one of the oldest historical churches in east Jerusalem, was subjected to an arson attempt when an extremist settler set a fire inside the church. Some of the church's seats and floor were damaged, but the fire was quickly controlled before it could destroy the church.