The Israeli settlers continue their attacks against Palestinian Muslim and Christian places of worship, the latest of which has been the attempt to set on fire the Church of All Nations in Jerusalem. 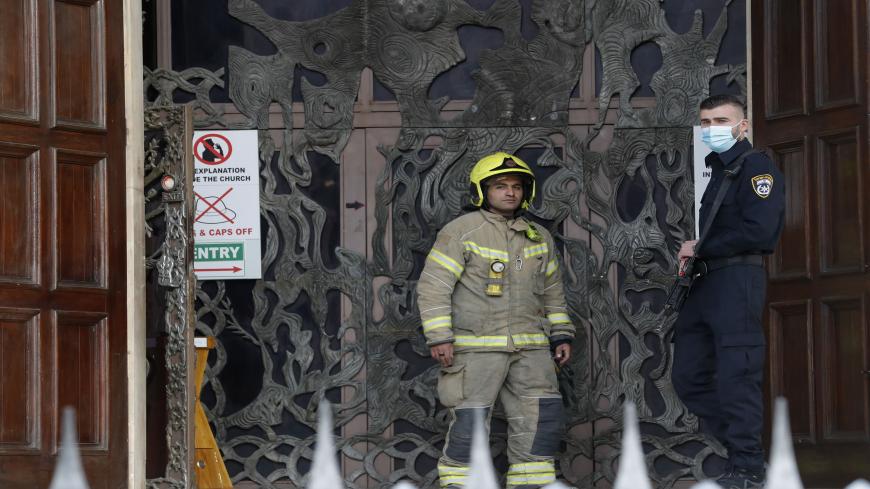 Israeli police and firefighters stand at the entrance of the Church of All Nations in the Garden of Gethsemane after an arson attempt, East Jerusalem, Dec. 4, 2020. - Ahmad Gharabli/AFP via Getty Images

RAMALLAH, West Bank — The Church of All Nations built on the land of Gethsemane in East Jerusalem survived Dec. 4 an attempted arson attack. An Israeli settler had lit a fire inside the church before it was quickly extinguished, causing only minor damages.

With the help of young Jerusalemites, the church guard managed to catch the settler before he escaped and turned him over to the Israeli police.

Hamza Ajaj, a 30-year-old Jerusalemite who lives next to the church, was an eyewitness to the attempted arson attack. Ajaj told Al-Monitor, “I was sitting in front of my house at around 2 p.m. when I saw the church guard, who is also a friend of mine, running outside the church. So I ran after him to check what was going on. He told me that a settler set fire to the church and ran away.”

Ajaj added, “The settler took advantage of the fact that there were no worshippers and tourists in the church — which is closed as part of the coronavirus-related measures — to break into the place and pour a flammable substance on the church’s wooden benches and set it alight before fleeing. We were able to catch him and hand him over to the Israeli police.”

Hanna Issa, secretary-general of the Islamic-Christian Commission in Support of Jerusalem and Holy Sites, told Al-Monitor that this is the fourth attack against the church. The first one, he said, occurred in 1995 when a settler tried in vain to burn it down, and the second attack took place in 1998 when Israeli soldiers stormed the church and fired at the worshippers without causing any injuries. He noted that the third attack was by the Israeli authorities in 2010, when they conducted excavation works near the church in an attempt to weaken its foundations.

Issa said that the attacks against Christian sanctities are carried out by the "price tag" and Lehava groups that target Christians and call to set their churches on fire and breach religious sanctities. The groups’ activities are not only limited to the West Bank, as they also extend to inside the Green Line, as happened in 2015 with the burning of the Church of the Multiplication of the Loaves and Fish in Tiberias, according to Issa.

The Church of All Nations, also called the Gethsemane Church, was built at the foot of the Mount of Olives in Jerusalem between 1919 and 1924 on the site of two ancient churches. Its construction was funded by a group of European countries. The church has distinguished domes and a facade, which involve a series of marble columns surmounted by a mosaic picturing Christ as the link between God and humanity.

Commenting on the importance of that land, Issa said that the name Gethsemane means oil press in Aramaic. The land is located at the foot of the Mount of Olives and according to some Christian traditions was reportedly the property of Saint Anne, the mother of Mary and the maternal grandmother of Jesus, he said.

For Christians, the land is linked to the betrayal of Christ by his disciple Judas Iscariot, as they believe that Jesus Christ prayed and met with his disciples there the day before he was arrested and crucified, Issa added.

Issa noted that the Church of the Sepulchre of Saint Mary includes the sepulchre of the Holy Mary, the mother of Christ, and the miraculous icon recounting her story (her assumption into heaven). The Gethsemane land also includes an olive grove consisting of eight olive trees dating back to the Roman era. In addition, it is the site of the Church of Mary Magdalene, one of the most beautiful churches in the city, which was built at the heart of the slope of the Mount of Olives, and involves seven gilded domes surmounted by a long cross.

The attack on the Church of All Nations is only one of several previous attacks on Christian and Islamic holy sites. In addition to the daily incursions into Al-Aqsa Mosque in Jerusalem and Israel's ban on the Muslim call to prayer in the city, settlers repeatedly destroy Islamic and Christian tombs and write racial expressions on the walls of mosques, churches and monasteries. These attacks have intensified in the past years. On July 27, settlers set fire to Al-Bir Wal-Ihsan Mosque in the West Bank and sprayed racist slurs on its walls. In April 2018, settlers torched the Aqraba Mosque in Nablus in the northern West Bank, but locals managed to extinguish the fire before it spread.

In February 2015, members of the price tag group set fire to the Church of the Dormition on Mount Zion in Jerusalem, while in October of the same year, settlers attempted to burn down the Hassan Bek Mosque in Jaffa city. Also in 2015, the Church of the Multiplication in Tabgha was set on fire.

Ramzi Khoury, president of the Higher Presidential Committee of Churches Affairs, said in a press statement Dec. 4 that the attack is “a systematic act by the [Israeli] occupation government and settlers to weaken the Palestinian Arab presence in Jerusalem and to Judaize [the city].”

This attack, which will not be the last in the Palestinians’ eyes, raises questions on the lack of any Palestinian official and factional plans in the face of the settlers’ attacks. Issa said, “Everytime an attack takes place, everyone rushes to voice condemnations and denouncements, while no plans are adopted to prevent these attacks.”

In a Dec. 4 statement, the Palestinian Ministry of Foreign Affairs called on the international community to “confront the settlers’ terrorism by adding them to the international list of terrorism, and deal responsibly with the danger they pose.”

Ahmad al-Deek, political adviser in the PA Ministry of Foreign Affairs, told Al-Monitor, “The attack on the church is a complete and obvious crime and a violation of international law, the Geneva Conventions and humanitarian principles as affirmed by the freedom of access to places of worship.”

He said the Ministry of Foreign Affairs is documenting the attacks and communicating with countries around the world to expose these attacks and violations. In addition, the two Palestine missions in Geneva and New York are writing to the presidencies of the United Nations Security Council and General Assembly, as well as the director general of the Human Rights Council, demanding that they assume their moral, political and legal responsibility regarding these crimes, he added.

Issa added, “Even the statements of condemnation that the UN and countries’ officials release are weak and insufficient, and are not to the level of the crimes committed by the occupation’s authorities and settlers.”