Pilgrims celebrate Christmas under Church of the Nativity's new roof

Bethlehem's ancient Church of the Nativity is undergoing a long overdue renovation, and its wooden roof and mosaics have been restored in time for Christmas. 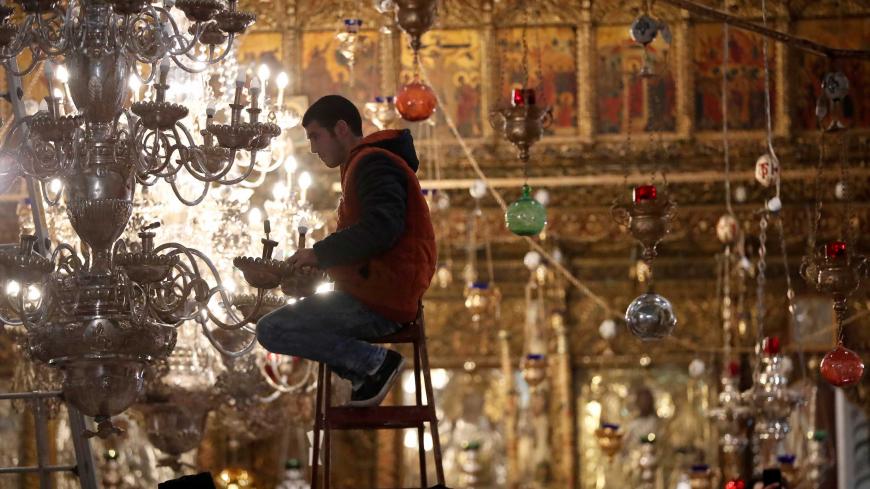 A worker prepares lights ahead of Christmas celebrations in the Church of the Nativity in the West Bank city of Bethlehem, Dec. 19, 2017. - REUTERS/Goran Tomasevic

BETHLEHEM, West Bank — Bethlehem's Al-Mahd Church, better known as the Church of the Nativity, is greeting Christmas with a fresh face this year following a major rehabilitation of its roof and ancient mosaics.

The church, on the UNESCO World Heritage List since 2012, has suffered earthquakes, storms and even political sieges ever since its construction in A.D. 330. The renovation of the church has been on the agenda ever since the late 2000s, with both the Palestinian Authority and UNESCO expressing a commitment to raise funds for much-needed work. Several parallel rehabilitation efforts started in 2013, and today, about 70% of its renovation work has been completed, Hanna Issa, the secretary-general of the Islamic-Christian Commission in Support of Jerusalem and Holy Sites, told Al-Monitor.

Known as the world's oldest church in daily use, Al-Mahd's original basilica was built in the fourth century by Roman Emperor Constantine I above a cave where Virgin Mary is said to have given birth to Jesus. In the early medieval period, other ecclesiastical buildings were incorporated into the original site. Consequently, today the Church of the Nativity is overseen by members of the Greek Orthodox Church, the Custody of the Holy Land and the Armenian Church. It's considered one of the most important Christian churches in the world after the Church of the Holy Sepulcher.

The chapel’s floor and interior walls are decorated with marble and beautiful mosaics. Behind the altar, a silver star bears the Latin inscription, “Jesus was born here of the Virgin Mary.”

Issa pointed out that the church has been destroyed and rebuilt several times. He told Al-Monitor, “Al-Mahd Church was destroyed during the revolution of the Samaritans against the Byzantines in 528, then rebuilt in 535, but the last large-scale restoration and rehabilitation was in 650.”

By the 21st century, both the mosaics and woodwork had been badly damaged. When UNESCO's experts placed the site on the World Heritage List, they noted that the structure of the main church was highly vulnerable due to a lack of maintenance and repair. The interior walls and the mosaic floor are cracked and its ancient wood carvings have been damaged by humidity. A technical plan to restore the roof was developed by an advisory committee formed by the Palestinian president in cooperation with the three churches in charge of the holy site.

Muslims in the area made donations for the church’s restoration and rehabilitation.

Issa pointed out that Arab, Islamic and European countries as well as the Palestinian Authority and Palestinian banks contributed funds. So did Palestinian businessmen at home and abroad, the Paltel group and the Turkish International Cooperation and Development Agency.

The cooperation “reflects the peaceful religious coexistence between Muslims and Christians in Palestine and the world, along with the common fate they both share,” he said.

“Italian companies are working on the restoration of the church. In August 2013, the Italian Piacentini Costruzioni company signed a contract with the presidential committee tasked with the renovation of the Church of the Nativity to fully restore it. So far, more than 70% of the rehabilitation work has been completed,” Issa told Al-Monitor.

Issa went on, “The Italian company restored the church’s wooden roof, which had been damaged. It also restored most mosaic murals on the walls and floor of the church. The main wooden door and the four iron gates inside the church were also restored. Work is now ongoing to restore the 50 marble columns.”

He added, “So far, restoration works have cost more than $12 million. More donations are needed to complete the rehabilitation of the church, which has been severely damaged over the years. Most recently, the church was directly affected by gunshots during the Israeli invasion of the West Bank in 2002.”

Al-Mahd was besieged for 40 days during the Israeli invasion of the West Bank as part of the military operation called Defensive Shield. The operation resulted in the death of eight Palestinian fighters and the deportation of dozens of them to the Gaza Strip and some European countries.

Issa urged joint efforts to preserve the position of the church as a beacon for pilgrims, saying, "[We must] work together to make it the center of attention of international and regional institutions and organizations. It is one of the three oldest and most important churches in Palestine, along with the Resurrection Church that witnessed the resurrection of Jesus Christ from the dead, and the Church of the Annunciation, where the Virgin Mary was told she was carrying Jesus Christ.”

He also noted that Christmas is an important occasion in Bethlehem. “Christians and Muslims around the world to go to Bethlehem city, especially with Christmas season approaching and the lighting of the Christmas tree, considered one of the most beautiful in the world, and to visit the touristic sites of the city and to pray in its religious sites for peace and love to prevail in the holy lands," he said, adding that some 45,000 Christians live in West Bank, Gaza Strip and East Jerusalem.

The dean of Al-Azhar Institute in Palestine, Imad Hamato, told Al-Monitor, "Islam calls for Muslims to preserve places of worship, whether Christian or Muslim. This aims to create mutual respect and to strengthen national unity, tolerance and love by showing the depth of the relationship between [the different faiths]." He added that the donations from the Muslims for the church's rehabilitation was a good example of this goodwill.

Hamato went on, "The church embraced Muslims during the recent Israeli war on the Gaza Strip in the summer of 2014. It opened its doors to them and they took refuge while escaping the Israeli bombardment of the Shajaiya neighborhood in the east of Gaza City after their homes and properties were destroyed. The church also provided services to them without any discrimination based on religion."