A new roof in Bethlehem, a desecrated altar in Diyarbakir, Christmas trees in Aleppo and an appreciation of “fellow travelers” in faith. 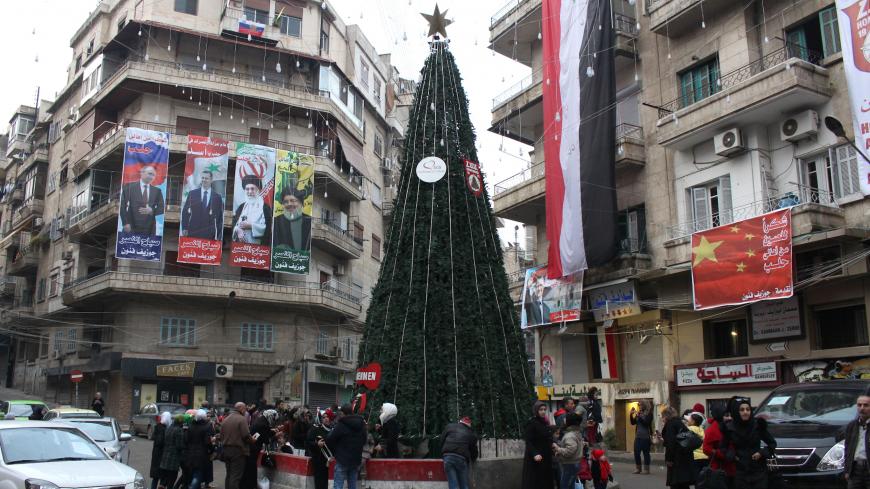 The Trump administration’s decision to recognize Jerusalem as the capital of Israel, which led to the United States being scolded by 128 countries at the UN General Assembly last week, has constrained some, but not all, of the joy of Christmas for Christians in the Middle East.

In addition to the calamitous diplomatic fallout, which we assessed here last week, Pope Francis, the archbishop of Canterbury and the leaders of Christian churches and communities in Jerusalem and throughout the region all opposed the decision. As Amr Mostafa reported from Cairo, Egypt’s Muslim, Coptic and secular groups united in opposition to the Jerusalem decision. US Vice President Mike Pence, an evangelical Christian, who had to postpone his travel to the region because of congressional action on tax reform, would have been poorly received, if received at all, by representatives of Christian communities.

Despite the developments on Jerusalem, there was still joy in Bethlehem, where, as Ibrahim Abdelhadi reported, the “Al-Mahd Church, better known as the Church of the Nativity, is greeting Christmas with a fresh face this year following a major rehabilitation of its roof and ancient mosaics.”

A UNESCO World Heritage site and, Abelhadi said, reportedly the world's oldest church in daily use, “Al-Mahd's original basilica was built in the fourth century by Roman Emperor Constantine I above a cave where Virgin Mary is said to have given birth to Jesus. In the early medieval period, other ecclesiastical buildings were incorporated into the original site. Consequently, today the Church of the Nativity is overseen by members of the Greek Orthodox Church, the Custody of the Holy Land and the Armenian Church. It's considered one of the most important Christian churches in the world after the Church of the Holy Sepulcher.”

Unfortunately, one of the most revered churches in Turkey has fallen upon harder times. Mahmut Bozarslan reported that the centuries-old Surp Giragos Armenian Church in Diyarbakir, which had been restored after years of disuse and abuse in 2012, only to be damaged and desecrated as a result of the fighting in 2015 between Turkish security and Kurdistan Workers Party forces, has suffered subsequent vandalism and desecration. Bozarslan wrote that for church board member Gaffur Turkay, “The fact that hammer-wielding vandals could enter and damage the house of worship while members of the church board could only go there after receiving permission is a bitter pill to swallow.”

The defeat of the Islamic State in Iraq and Syria offers some welcome good news, allowing those displaced by the war to return and rebuild their cities, towns and villages. In Iraq, as Omar Sattar reported in October, there are about 450,000 Christians with varying political alignments. Sattar wrote, “Iraqi Christians' pursuit of living in security and having their civil rights safeguarded exceeds their search for a political and administrative independence. This is due to the harassment they have suffered at the hands of armed groups and militias, as well as their political exploitation by various Iraqi parties that view the minority card to be of a major importance in acquiring land and obtaining international support and sympathy.”

It is perhaps fitting that we close our column with a return to Aleppo, where there have been Christmas celebrations and a proliferation of Christmas trees, as citizens of different faiths use the holiday to express hope for an end to war and a return to normalcy. Last month, parts of the ancient souk reopened. The slow turnaround in Aleppo, while fragile (there was an attack by armed groups this week), reminds us of what we wrote here almost two years ago, at the height of the war: “A Syrian government victory in Aleppo could be the beginning of the end of the sectarian mindset that would have been alien to the city prior to 2011. There is no more appropriate city to begin Syria’s healing. A Syrian government victory in Aleppo will make it harder to rationalize Western backing for jihadi groups who want to keep up the fight against long odds in the rest of the country. IS and al-Qaeda may prefer, over time, to begin to relocate to Libya and other countries where they can avoid the pounding from the US-led anti-IS coalition and Russian- and Iranian-backed Syrian forces. This may already be happening, and if so, it is to be cheered by those who seek a unified, secular and nonsectarian Syria, as outlined in the Vienna Communique, and as is Aleppo’s tradition.”

Pope Francis’ Christmas greetings this week offered a sense of hope for the Middle East based on shared respect and compassion, when he said, “Those who are different, either culturally or religiously, should not be seen or treated as enemies, but rather welcomed as fellow travelers, in the genuine conviction that the good of each resides in the good of all. Sincerity of intentions, because dialogue, as an authentic expression of our humanity, is not a strategy for achieving specific goals, but rather a path to truth, one that deserves to be undertaken patiently, in order to transform competition into cooperation.”