Diyarbakir's Christians, many of them ethnic Armenians, have been caught up in the violence between the Turkish security forces and the Kurdistan Workers Party. 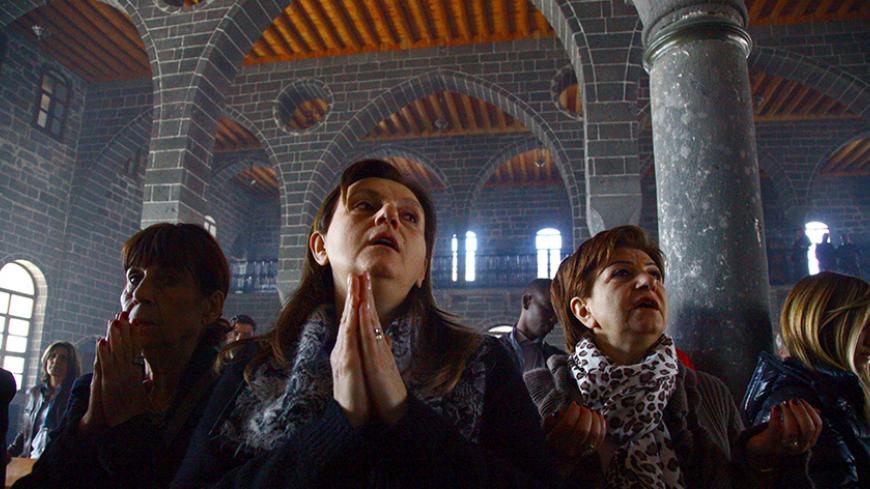 The peal of church bells mingles with children’s laughter. The Muslim call to prayer floats through the air. In the cobbled courtyard of the Surp Giragos Armenian Orthodox Church, young lovers sip wine and plan their weddings and lives. It’s a typical day in Sur, the ancient heart of the Kurds’ unofficial capital, Diyarbakir.

So it was until armed teenagers with the Patriotic Revolutionary Youth Movement (YDG-H), the urban youth branch of the Kurdistan Workers Party (PKK), declared “self rule” over large swathes of Sur, erecting barricades and digging trenches to keep state authorities out. The pattern is being repeated in towns and cities across the Kurdish-majority southeast, part of the escalating war between the Turkish armed forces and the PKK that was reignited following the collapse of a two-year cease-fire in July. Over 150 civilians, including dozens of children, have been killed, most of them by the security forces, claim rights advocates.

The youths remain dug in, but over half of Sur’s residents have fled. And while their suffering has been well-documented, little has been said about the clutch of Christians who have been quietly toiling to resurrect Sur’s once vibrant multi-faith community. It was brutally destroyed in 1915, when Ottoman forces and their Kurdish collaborators slaughtered hundreds of thousands of Christians (most of them Armenians) and other non-Muslims in what many respected scholars call genocide.

“Now we are caught between two fires, between the PKK and the state,” said Gaffur Turkay, who has helped to run Surp Giragos, the largest Armenian church in the Middle East, since it reopened its doors in 2012.

“Because of the ongoing violence our church has been forced to shut down. We were meant to open a museum in September on the church premises but had to cancel,” Turkay told Al-Monitor in an interview in Diyarbakir. The cafe, which used to draw hundreds of visitors and with it sorely needed income to help maintain Surp Giragos, is deserted.

In Turkey live the descendants of tens of thousands — some say many more — of Armenians who converted to Islam in the aftermath of the genocide to avert certain death. These “leftovers of the sword” embraced Islamic traditions, but everyone knew they were Armenians.

“Our tragedy is that Muslims never accepted as us true Muslims, nor Armenians as true Armenians,” Gaffur noted. “And in this [cycle of] violence we are again stuck in the middle,” he added.

The reopening of Surp Giragos, after a costly and meticulous restoration project, encouraged many “hidden” Armenians like Turkay to emerge from the shadows to reclaim their identities, and never so many as on April 24 of this year, which marked the centenary of the genocide.

They came out to formally join diaspora Armenians from far-flung corners of the world in a poignant commemorative service amid the ruins of Surp Sarkis, another Armenian church in Sur.

Popular historian Osman Koker notes in “Armenians in Turkey 100 Years Ago” that prior to 1915, “Some 10,000 of 35,000 inhabitants of Diyarbakir were Armenians. … Half of the members of the town council and a significant portion of the members of the provincial council were Christian, notably Armenians. … Nearly all of the lawyers, physicians and pharmacists of Diyarbakir were Christians, and the majority of them were Armenians.”

For decades the genocide, formally and vigorously denied by Turkey, remained a taboo subject. Those who dared to challenge the official line, that the majority of the empire’s Armenian subjects fell victim to starvation or disease during their forced deportation to the Syrian desert, faced prosecution. But under Turkey’s Islamist Justice and Development Party, which came to power over a decade ago, open debate of 1915 has grown louder and in line with European Union-oriented reforms, some confiscated church properties are gradually being returned.

In this new spirit of openness, Armenians descended from victims of the genocide found the courage to come to Turkey to rediscover their roots. Many traveled to the Kurdish areas, where local Kurdish-run municipalities welcomed them in an effort to make amends for the horrors of the past.

Khatchig Mouradian, an Armenian Lebanese academic at Rutgers University in New Jersey who has done extensive research on the genocide, was until the fighting erupted a frequent visitor to the Kurdish areas and brought fellow diaspora Armenians, including students, there a couple dozen times over the past five years.

“In recent years, Diyarbakir had become a laboratory where shards of Armenian memory were mended as the city braved the difficulty of confronting the legacy of the Armenian genocide,” Mouradian told Al-Monitor in an interview. “Today, alongside the lost lives and pulverized historic stone and glass, the memory and legacy is being buried under yet another layer of violence.” Mouradian added that he would “never bring groups now.”

Abdullah Demirbas, Sur's former mayor, spearheaded the campaign for Armenian Kurdish reconciliation, making the ancient tongue of Armenian and Syrian Orthodox Christians, Aramaic, part of the official menu of languages used by his municipality. Demirbas was instrumental in helping to raise funds for the restoration of Surp Giragos and other non-Muslim places of worship.

“Sur was my child. I cannot believe what is happening,” he told Al-Monitor over tea in Istanbul. But like many Kurds, he blames the state for the breakdown of the peace process. “The trenches are not the cause. They are the result of the government’s refusal to accept the Kurds as equals,” said Demirbas, who has been repeatedly jailed and prosecuted on thinly supported charges of “membership of a terrorist group.”

Save for a few shattered windows, Surp Giragos has survived intact. So too have Chaldean, Protestant and Syrian Orthodox churches. But another Sur landmark, the 500-year-old Kursunlu mosque, was not as lucky. The once imposing structure has been reduced to rubble, its remaining walls blackened by smoke from a fire that the YDG-H insists was caused by rockets fired by the security forces. The government claims that the PKK was responsible. On a recent morning when the government briefly lifted its round-the-clock curfew over Sur, small groups of people gathered around the remains of the mosque, cataloguing the destruction with their cellular phones and praying before the tombs saints buried in its garden as masked youths stood guard.

“Look,” said one of the youths, pointing to an armored vehicle parked within a direct firing line of the mosque. “Who do you think did this?”

As the bloody standoff in Sur enters it second month, the city’s Christian worshippers have had to celebrate Christmas elsewhere.

“It was a very sad Christmas for us,” said Ahmet Guvener, the pastor of the Protestant church in Sur. He counts some 100 souls in his flock. “If the fighting doesn’t stop our community, our whole way of life is going to die,” he told Al-Monitor in an interview. Guvener has other reasons to worry. Suspected Islamic State sympathizers posted a chilling video on YouTube showing footage of Guvener and fellow “infidels” who are called “a big threat to Islam.” It ends with an image of the IS flag planted in the sand on an unidentified beach. Guvener said a group of pastors targeted in the video filed a criminal complaint in October.

“The government has censored hundreds of videos on the grounds that they constitute a threat to national security. But for some reason this video, which is a clear invitation for us to be harmed, remains online,” he concluded with a bitter laugh.