Turkey’s Kurds are taking responsibility for their role in the mass killings of Ottoman Armenians in 1915. 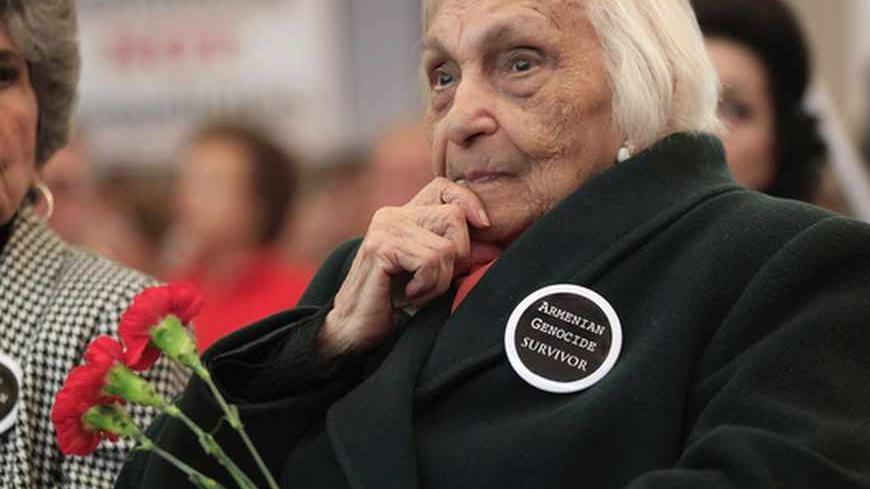 Orobik Eminian, 98, who was the only member of her family to escape the World War I killing of Armenians by Ottoman Turks, joins others in commemorating the 95th anniversary of the killings and a call for it to be termed a genocide in New York City, April 25, 2010. - REUTERS/Jessica Rinaldi

“The Armenian population is melting.”

This bleak assessment was pronounced by Sahak Mashalyan, an Armenian Orthodox priest, during a recent Sunday mass at the Asdvadzadzin church in Istanbul. Reeling off the statistics: 482 funerals, 236 baptisms and 191 weddings, the black-robed cleric solemnly intoned, “These figures point to a community … that is dying.”

Little over a century ago, the Armenian Patriarchate put Anatolia’s Armenian population at more than two million. In 1915, tragedy struck. Estimated figures vary, but between 800,000 and a million Armenians are thought to have been slaughtered by Ottoman forces and their Kurdish allies in what many respected historians call the first genocide of the 20th century. Turkey vehemently denies any genocidal intent. The official line is that most of the Armenians died from hunger and disease, as they were forcibly deported to the deserts of Syria amid the upheaval of the collapsing empire.

The ruling Islamic Justice and Development Party has done more than any of its pro-secular predecessors to improve the lot of Christian minorities and to encourage freer debate of the horrors that befell them. Yet it has also showered millions of dollars on international lobbying firms in a vain effort to peddle the official version of events. A steady trickle of nations continue to recognize the events of 1915 as genocide. Turkey’s biggest worry is that on the centenary in 2015, the United States will risk wrecking relations and follow suit.

In Turkey’s mainly Kurdish southeastern province of Diyarbakir, global diplomacy does not figure in the calculations of Abdullah Demirbas, the mayor of the city’s ancient Sur district. A maze of narrow cobbled streets lined with decrepit stone houses, Sur used to be known as the “neighborhood of the infidels” because of the large number of Armenians, Syrian Orthodox Christians and Jews who once lived there. Since being twice elected to office on the ticket of Turkey's largest pro-Kurdish party, Peace and Democracy (BDP), Demirbas, a stocky former schoolteacher with an easy smile, has thrown himself wholeheartedly into making amends for the past.

“As Kurds, we also bear responsibility for the suffering of the Armenians,” he told Al-Monitor over glasses of ruby-red tea. “We are sorry, and we need to prove it.” As a first step, Demirbas launched free Armenian-language classes two years ago at the municipality offices. “They were an instant hit,” Demirbas said. Many of those who enrolled were thought to be “hidden Armenians” or the descendants of those who converted to Islam to survive.

One such "hidden Armenian," a gnarled octogenarian called Ismail, confided to Al-Monitor that his father’s real name was Leon.

“They wiped out his entire family, out in the fields,” he said as he awaited an audience with Demirbas. The old man’s voice cracked with emotion. “My father was rescued by a Turkish officer and became a Muslim. But though, praise God, I am a good Muslim too, praying five times a day, I know I am not accepted,” he added. “In their minds, I am always the son of the unbeliever.”

The Kurds’ role in the killings has been well documented, increasingly now by the Kurds themselves.

Egged on by their Ottoman rulers, Kurdish tribal chieftains raped, murdered and pillaged their way through the southeast provinces where for centuries they had co-existed, if uneasily, with the Armenians and other non-Muslims. Henry Morgenthau, who served as US ambassador in Constantinople at the height of the bloodshed, described the Kurds' complicity in his chilling 1918 memoir Ambassador Morgenthau’s Story thusly:

“The Kurds would sweep down from their mountain homes. Rushing up to the young girls, they would lift their veils and carry the pretty ones off to the hills. They would steal such children as pleased their fancy and mercilessly rob all the rest of the throng. … While they were committing these depredations, the Kurds would freely massacre, and the screams of women and old men would add to the general horror.”

Osman Koker, a Turkish historian who has chronicled Armenian life through a rich collection of postcards and photographs predating 1915, reckons more than half of Diyarbakir’s population was non-Muslim before the violence began.

“Most of them were Armenians, now there are none,” Koker told Al-Monitor in an interview. Hashim Hashimi, a former member of parliament and a Sunni Muslim spiritual leader with a robust following, told Al-Monitor, “Sadly, many imams were convincing people that if they killed an infidel they would find their place in heaven and be rewarded with beautiful girls.” This meant that thousands of Syrian Orthodox and other Christians were not spared, either.

In 2009 Demirbas and Osman Baydemir, a fellow BDP politician and the mayor of Greater Diyarbakir, decided to help with the restoration of an Armenian Orthodox church that had lay in ruins for decades in Sur. Baydemir donated a third of the costs of restoring Surp Giragos to its former magnificence. In 2011 the church, said to be the largest Armenian church in the Middle East, opened its doors as a fully functioning house of worship.

Ergun Ayik, an Armenian entrepreneur and philanthropist who runs the Surp Giragos Foundation, told Al-Monitor that the BDP mayors “went out of their way to help us,” even providing the church with free utilities and security guards. A new museum of Armenian culture that is due to open by the end of 2013 within the Surp Giragos complex under the sponsorship of the Greater Diyarbakir municipality should also help draw tourists, not to mention thousands of “hidden Armenians” thought to be scattered across the southeast.

Silva Ozyerli, an Armenian activist from Diyarbakir who left for Istanbul in the 1970s, has agreed to donate some family treasures, including a silk nightshirt, several finely embroidered tablecloths and a pair of engraved copper bowls to the museum. Ozyerli voiced her enthusiasm for the project in an interview with Al-Monitor.

“You know why it is dear to me?” she asked a tinge of defiance creeping into her voice. “It is because everything in that museum will show people that not too long ago, Diyarbakir was every bit as Armenian as it was Kurdish, if not more so.”

by Murielle KASPRZAK and Joseph SCHMID | AFP | May 26, 2022
END_OF_DOCUMENT_TOKEN_TO_BE_REPLACED