The descendants of Islamized Armenians who survived the Ottoman massacres during World War I have begun to “come out” in Turkey, braving century-old prejudices and fears to embrace their Armenian roots, reports Sibel Utku Bila from Diyarbakir. 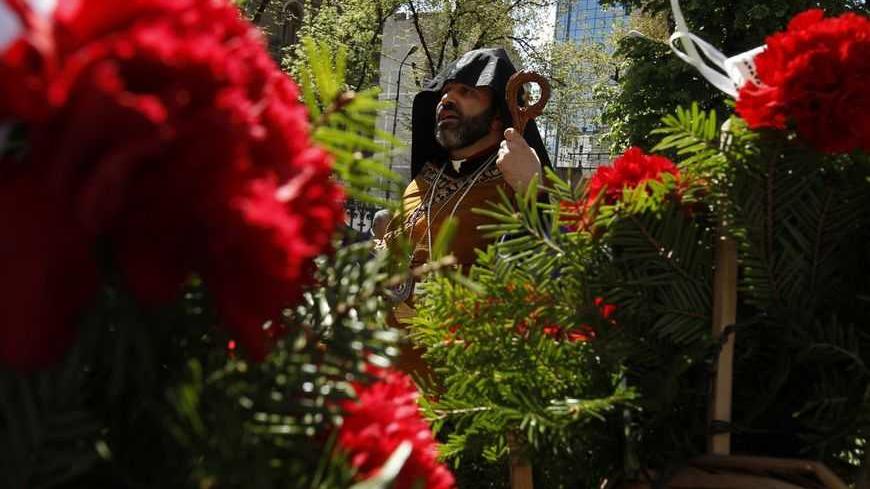 An Armenian bishop attends a wreath-laying ceremony after a special prayer marking the anniversary of mass killings of Armenians in Ottoman Empire in 1915, outside the Armenian Church in Bucharest, April 24, 2012. - REUTERS/Bogdan Cristel

DIYARBAKIR, Turkey — Abdurrahim Zorarslan’s world turned upside down at age 25 when his Kurdish clan revealed to him he was Armenian. His father, a survivor of the Ottoman massacres, saved and Islamized by a Kurdish couple, had already died — without uttering a word about his real self. After much soul-searching, Zorarslan “listened to something inside” and “secretly” embraced his Armenian identity. Aged 53 today, he boldly speaks out and introduces himself with the typical Armenian name, Armen.

The self-rediscovery, however, has come with a cost. The retired driver is now at odds with his children and Kurdish wife, a devout Muslim wearing the black chador, but still believes that “one can reach nowhere with fear of his roots.”

Zorarslan is among a small but growing number of brave souls in Turkey’s mainly Kurdish southeast who have come to openly embrace their Armenian origins, emboldened by the breaking of the Armenian taboo in Turkey over the past several years and the message of pluralism spread by the Kurdish political movement in the region.

The re-connection is a painful process — not only because of deep-rooted fears over the 1915-17 massacres, but also the distinct fabric of the impoverished, rural southeast, where strict patriarchal norms rule closely-knit clans and Islam remains a powerful social glue.

At the turn of the 20th century, Kurds and Armenians dominated the population of eastern Anatolia. Bonded to Turks in Islamic fraternity, Kurds joined the massacres orchestrated by their Ottoman rulers and seized the properties of slain or deported Armenian neighbors. Many Armenian children escaped death in the refuge of Muslim homes: Some were saved out of compassion, others were abducted to be raised as laborers or wives. The adoptees were Islamized and assimilated into Kurdish or Turkish culture. It is unknown how many survivors lived on as Muslims, with estimates ranging from tens of thousands to several hundred thousand.

According to the accounts of descendants in Diyarbakir, Turkey’s largest Kurdish city, some survivors kept memory of their Armenian identity, sought out other Islamized Armenians to marry and let their children know their roots. Others sank into silence and tried to obliterate their past, haunted by the horror of the massacres and eager to shield their progeny against persecution.

Neighbors, however, never forgot. A common childhood memory of descendants is how their peers would taunt them as “gavur” or “infidels” in street games. Relatives would often give away the secret in the heat of household quarrels, calling a father or a grandmother a “dirty Armenian.”

Some complain that because of their Muslim faith they are often ostracized also by Turkey’s Christian Armenians, who are concentrated in cosmopolitan Istanbul and number about 60,000.

“The [descendants of] Islamized Armenians are 100% assimilated. But there is always someone to remind them who they are. They are not fully accepted by either side. It’s dramatic,” Gafur Turkay, the grandson of an Armenian survivor, told Al-Monitor in the yard of the ancient Surp Giragos Church in Diyarbakir, a monumental reminder of the city’s once-thriving Armenian community.

After decades of silent awareness, Turkay now introduces himself directly as “an Armenian.” His father remains a devout Muslim who has made the Hajj pilgrimage to Mecca. Out of 18 siblings, only he and a brother have converted to Christianity.

The 47-year-old insurer sits also on the board of the foundation that runs the Surp Giragos Church, rebuilt from ruins and re-opened for worship in October.

He estimates that at least 1 million people in Turkey’s southeast bear Armenian blood today, even though mixed marriages and natural population growth have diluted Armenian ancestries. The acknowledgement of Armenian roots, he explains, is a difficult matter since descendants remain strongly bound to Islam and equate Armenianness to Christianity.

“More often than not those people are rigid Muslims — a trait they probably developed in order to gain acceptance and dispel suspicion. Let them be Muslims, but I wish they could at least accept their Armenian origins,” Turkay said. “But I can’t persuade even my own sister. ‘God forbid! You can’t make me call myself an Armenian’ is all she says.”

For Zorarslan, the resentment of his own family is no match to his resolve to discover his roots. On his mobile phone, buzzing with the ringtone of an Armenian tune, he proudly displays pictures of cousins he has tracked down in France, the Netherlands, the United States and Istanbul. His eyes sparkle with excitement and then well up with tears as he recounts how some relatives were happy to reconnect, but others refused to answer letters and return calls. “Is it about religion? Do they worry we may not be really relatives or do they think I am after money? I’m still trying to figure out,” he said.

Behcet Sayan, 47, remembers how his grandfather would keep company with six other survivors in their native village near Diyarbakir and how the elderly men would chat in Armenian. A former construction worker who now greets visitors at Surp Giragos, Sayan says he has endorsed Christianity “at heart.” He wishes other family members follow suit but is pessimistic. “My elder brother is a haji. You cannot change his mind even if you shred him to pieces. I wish my children follow me, but I know life will be difficult for them if they do. Let everybody make their own decision,” he said.

Surp Giragos, one of the largest Armenian churches in the Middle East, is still without a priest and a congregation. Nestled behind stone walls on a narrow cobbled street in the ancient heart of Diyarbakir, the edifice serves mostly as a tourist attraction.

Al-Monitor’s interview with Turkay in the churchyard was occasionally interrupted by young people, who, after touring the church, wanted to say hi and confide they also had an Armenian ancestor. Some inquired about the Armenian language courses launched in the city last year.

Kevork Calis, the Armenian teacher who flies every week from Istanbul to teach the course, politely turned down a request by this reporter to attend one of the classes. “I have about 20 students. They are all descendants of Islamized Armenians. Many are attending secretly,” he explained.

Compared to Turks, Kurds have been more forthcoming in efforts to reconcile with Armenians, driven by their own suffering in post-Ottoman Turkey and eager to advance their cause for pluralist democracy. Diyarbakir’s Kurdish-held local administration, for instance, provided financial assistance to renovate the Surp Giragos Church and sponsored the Armenian language courses in the city.

In February, prominent Kurdish politician Ahmet Turk admitted that “our grandfathers have blood on their hands” and apologized to Armenians. The apology, however, backfired as the veteran lawmaker appeared to reject direct Kurdish responsibility in the massacres, saying that Kurds were “manipulated” by Turks.

Armenian opinion leaders cast further doubt over Kurdish sincerity, irked by remarks that jailed Kurdish rebel leader Abdullah Ocalan made in his fledgling peace process with Ankara. In a transcript leaked to the media in late February, Ocalan emphasized Islamic bonds between Kurds and Turks, and spoke in hostile terms about Armenians and other non-Muslims.

Amid the soured climate, the Diyarbakir municipality is preparing for a fresh gesture. A monument dedicated to communities that have suffered persecution in Anatolia is expected to be unveiled in the city in the eve of April 24, the Armenians’ genocide remembrance day.

Correction: In a previous version of this article, the person described in the first paragraph was incorrectly referred to as a convert to Christianity. He remains a Muslim. This version has been corrected.