Iconic Armenian church survives war but not plunder in Turkey

The Surp Giragos Armenian Church in Diyarbakir enters the Christmas season as a victim of plunder and vandalism, despite its location in a sealed-off area with heavy security presence. 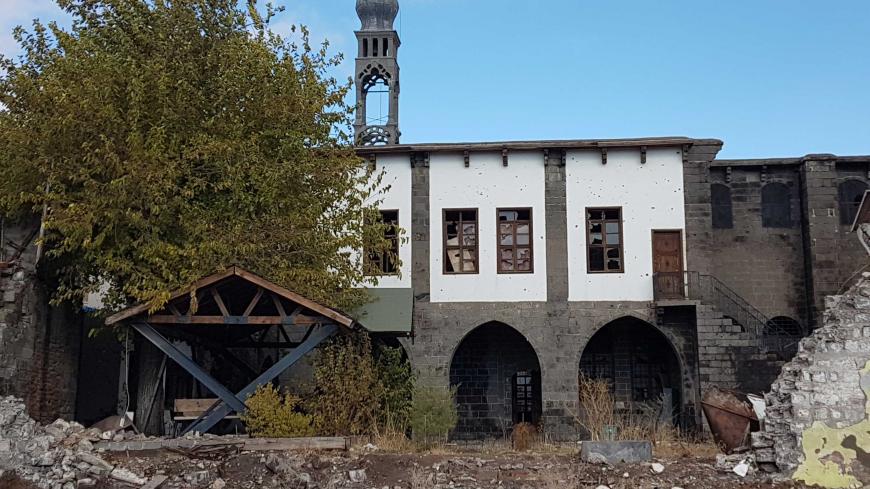 Surp Giragos Church, which had been restored a decade ago, has been plundered and vandalized in Diyarbakir, Turkey, Dec. 2, 2017. - Mahmut Bozarslan

DIYARBAKIR, Turkey — In the 1950s, the Turkish state returned the centuries-old Surp Giragos Armenian Church in Diyarbakir to the city’s Armenian community, after having used it as a warehouse for years. Armenian writer Migirdic Margosyan, a native of Diyarbakir, describes how ironsmiths, carpenters, painters and goldsmiths from the city’s “Infidel Quarter” joined hands to “revive that wreck” and reopen it quickly to worship, keen to preserve “the legacy of their ancestors.”

Little could the volunteers have known then that the ordeal involving the largest Armenian church in the Middle East was far from over. By the early 1980s, Surp Giragos was a church without a congregation as Diyarbakir’s Armenians dwindled away. Abandoned to its fate, the church fell into decay. When a new restoration began in 2008, only its walls were standing, with the windows broken, the roof collapsed and the interiors filled with soil.

During the three-year restoration, every corner of the church was meticulously repaired. An expert craftsman — one of only three left in Turkey — was brought to Diyarbakir and worked for half a year to renovate and complete the seven altars. The overhaul was crowned with a new church bell, brought from Russia. As services resumed, the church became a meeting point for Armenians — natives of Diyarbakir but now scattered across the world — and an attraction for tourists visiting the city.

This new atmosphere, however, was short-lived. In the fall off 2015, security forces cracked down on urban militants of the Kurdistan Workers Party, who had entrenched themselves behind ditches and barricades in residential areas in Sur, the ancient heart of Diyarbakir, where the church is nestled. Only months before the clashes erupted, UNESCO had put Sur on its World Heritage list.

The militants used the church as an emplacement and infirmary to treat their wounded, as evidenced by the medical waste found later inside. As the security forces advanced, the militants left the church, and this time the security forces used it. After the monthslong clashes, the church emerged with its yard walls ruined and riddled with bullets. Still, the Armenian community took solace in the fact that the church itself was standing. The authorities promised to repair the church and return it to the community.

The church was presumed to be under protection since the area remained sealed off even after the clashes ended in March 2016. Since then, however, the church has become the target of thieves, who broke in twice and stole various objects. How the thieves managed to sneak in remains a mystery, for even members of the church board need official permission to enter.

Most recently, a more malicious intruder — or intruders — broke into the church, apparently with a sledgehammer that was used to smash altars and reliefs. Armen Demirciyan, who used to work as a caretaker at Surp Giragos, said the news of plunder and desecration “cut him to the bone.”

He told Al-Monitor, “We had one place here and it is now gone. I am devastated. We had so many valuable things — they are all gone. We had an antique rifle — they have stolen it. They have broken the altars and stolen the books. In short, the place has been ravaged.”

For Demirciyan, the loss is not only about a church, but also about a meeting point for a community scattered across the world. “We worked so hard to restore it and now all our efforts have gone down the drain. It was a place that brought us [Armenians] together,” he added.

After news of the latest assault, Aram Atesyan, the Istanbul-based acting patriarch of Turkey’s Armenian community, flew to Diyarbakir in late November to inspect the damage. Visibly shaken after the visit, he said, “They have broken everything with a sledgehammer. It had taken three years to make those handmade ornaments. The altars are all broken to pieces.” What was ravaged, he stressed, is not solely an Armenian house of worship but a historical monument that belongs to Turkey. “Those monuments are the riches of the entire country,” he said. “This place does not belong only to us — it belongs to this state and these lands.”

Gaffur Turkay, a member of the church board and a resident of Diyarbakir, witnessed how the church fell into decay in the 1980s and then was reborn half a decade ago. “We were so moved, so full of hope after we brought the church … back into magnificent shape. We would go there every day just to sit and take care of it,” he told Al-Monitor.

Turkay was among those who inspected the damage after the clashes. “The church was on its feet. At least its basic elements — the walls, the roof and the tower bell — were intact,” he said. Despite some damage in the interior, the board was content that the edifice survived the clashes in much better shape than the Armenian Catholic Church and several mosques nearby, he noted.

Turkay said that as the uncertainty in Sur dragged on and the area remained off-limits to residents, “We got permissions from time to time to check on the church. In the past three or four months, we began to discover new damage each time we visited the church. We informed the authorities several times and asked them to find a solution but, unfortunately, the rings of the columns were ripped off first and then the altars were shattered with hammers. All figurines, reliefs, paintings and other materials were ransacked.”

For Turkay, the fact that hammer-wielding vandals could enter and damage the house of worship while members of the church board could only go there after receiving permission is a bitter pill to swallow.

Journalists, for instance, need permissions from various institutions in both Diyarbakir and Ankara to take pictures or film inside Surp Giragos, and sometimes even those permissions are not enough. Last year, this reporter witnessed how policemen standing on guard at the corner of the church turned away a foreign television crew, although it had obtained permission to film in the area. Curiously, the intruders are able to elude the security measures.

“Only construction workers can enter [Sur]. A very limited number of people can go and they are all under the control of the authorities,” Turkay said. “If this beautiful structure is going to be missing something else each time we go, this is a very serious problem.”