Back home after clashes, Kurds in Turkey's Sur find only debris

Some look for their homes, others for the bodies of relatives as Kurdish civilians are finally allowed to return to devastated neighborhoods in Diyarbakir after months of clashes between Kurdish militants and the security forces. 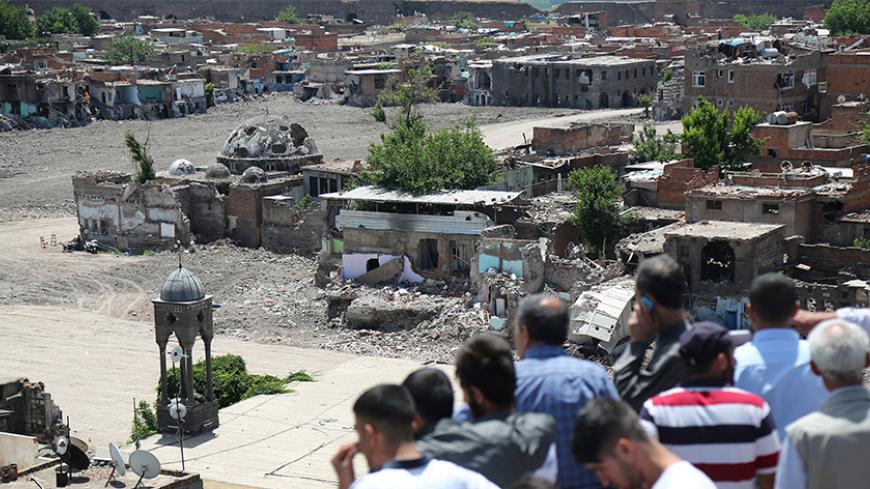 Residents look at buildings that were damaged during security operations and clashes between Turkish security forces and Kurdish militants in Sur district of Diyarbakir, May 22, 2016. - REUTERS/Sertac Kayar

DIYARBAKIR, Turkey — Some tall buildings in Diyarbakir’s ancient district of Sur serve as observation towers these days. After months of being refugees in their own city, local residents are finally allowed to return to some neighborhoods where fierce clashes between Kurdish militants and the security forces raged earlier this year, leaving the area in unrecognizable shape. Climbing on top of multistory buildings that survived the clashes, Kurdish civilians are now anxiously surveying the damage, while many are desperate to spot their homes — or what remains of them — in areas that remain sealed off, months after the security crackdown ended in March.

Shortly after the entry ban to some streets was lifted recently, a group of women climbed the steps of a five-story building, stopping on each floor and peering into open doors. Some residents were back to collect usable belongings. The women wished them well, and, moving on, grumbled, “Let Allah punish those who put us through this.”

Once on top of the building, they were stunned, hardly able to recognize the place they had lived in for years. Overcoming the initial shock, they joined others on the roof in an anxious exercise to locate their homes. “Look, that’s our house,” one of the women said. “No, that’s not it,” another countered, “Your house was behind the mosque.”

The once narrow streets, where cars were barely able to pass, now looked like spacious avenues. They were beyond recognition, if it weren’t for some historical landmarks. The building atop which the people had gathered was just at the boundary of the still sealed-off zone. Other roofs in the vicinity were similarly full with people, asking the same question, “What has become of my house?”

Some, like Firat Dalkiran, painfully discovered that not even wreckage was left where their homes once stood. Hoping to see his house intact, Dalkiran had rushed to the area early in the morning, as soon as the ban was lifted. Now he was gazing at an empty plot, where a piece of a wall was the only trace left behind from his home. “What we’ve seen here is just ruins. In fact, I couldn’t locate even the ruins [of my house]. If it weren’t for the school, I wouldn’t have managed to locate it. Only a wall is left, which I recognized by the ceramic tiles on it,” Dalkiran told Al-Monitor. “All my belongings are gone. My uncle — who lived in the same neighborhood — lost everything after spending his 70 years working. He fled in his pajamas, unable to take even his pants.”

Unlike Dalkiran, some were happy to discover their homes were intact. They excitedly sought help from journalists, asking them to zoom in their cameras on the buildings. But their joy soon disappeared as they realized the interiors of their homes were burned.

Muzaffer Cukur, a man in his 50s with hair graying and eyes welling up, silently looked around. What he was looking for was not a house, but a body — the one of his niece Rozerin Cukur, who was killed in the clashes in January. The authorities, who claim the young woman was a militant, say they have been unable to recover the body. Family members, however, say she had nothing to do with the militants and are now combing the area, street by street, hoping to find the body. “We heard from the media last night that some streets are now free to enter and so we came here to look for the body of our child. We are looking high and low [but] we’ve found no trace so far,” Cukur told Al-Monitor, as Rozerin’s father, Mustafa Cukur, joined him in the search.

Historical landmarks in Sur, which was last year added to UNESCO’s World Heritage List, also suffered their share of destruction. The walls of the Armenian Catholic church are partially destroyed, while the nearby Haci Hamit Mosque is missing its minaret, with a dome riddled with bullets. Another Armenian church, Surp Giragos, had its windows shattered and interior damaged.

Still, those ancient monuments were lucky compared with more ordinary structures in the area. A building with an intact door was almost impossible to find. The warring parties had used some buildings as fighting bases, others as places to rest. Stairways were littered with empty tins; one was also stained with blood. At the bloodied spot, a piece of paper reading “body #1” was left behind, suggesting that the security forces had been there for a crime scene report. A couple seemed relieved that they had escaped with relatively little damage, but grumbled that their apartment had been broken into, with the bedroom and closets rummaged. They claimed it was the security forces who had entered, while their neighbor showed Al-Monitor binoculars that had been left behind.

A flurry of activity was underway in the 14 streets where the entry ban was lifted on May 22. Residents hurried to collect intact belongings before leaving Sur for good. One of them, Medine Demir, was able to recover only a pressure cooker. “I’ll keep it for the rest of my life — as a reminder of these days,” she told Al-Monitor.

The tensions in Sur began last year after young militants of the Kurdistan Workers Party opposed state authority, digging trenches in residential areas to keep the security forces away. Though the ditches were initially filled, the militants managed to entrench themselves back. Following the Nov. 28 killing of the local bar association president, Tahir Elci, the authorities imposed a round-the-clock curfew in the area, setting the stage for lengthy clashes and forcing thousands of civilians to flee, a scenario that repeated itself in other regions across Turkey’s mainly Kurdish southeast. The scope of the curfews was at times expanded or scaled back; the security crackdown in Sur ended after 103 days in early March. According to security sources, 71 members of the security forces and about 200 militants were killed. Some areas are still off-limits to residents as the security forces continue to comb the terrain and remove rubble.