Renovation work has begun in the emptied, conflict-ravaged old city of Diyarbakir, where the government's restoration project is being criticized as a security move rather than an effort to preserve internationally acknowledged historic sites. 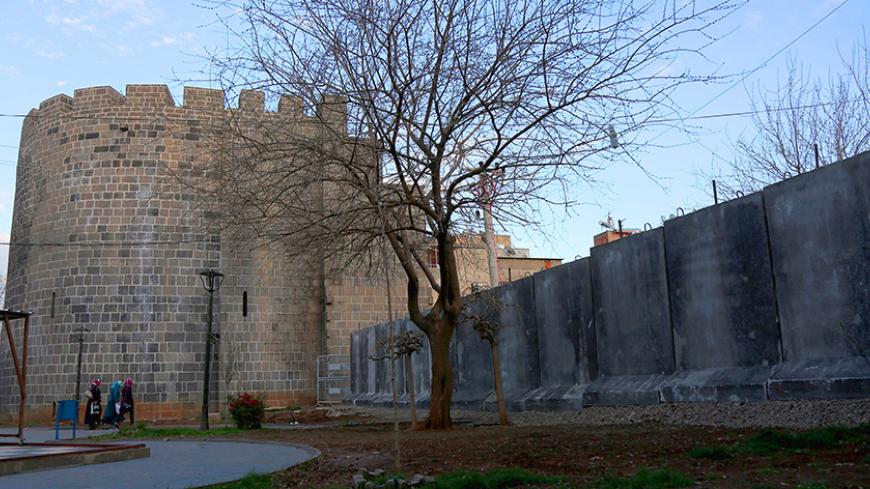 New concrete blocks are placed next to the historic city walls at the main entrance of the Sur district of the Kurdish-dominated southeastern city of Diyarbakir, Turkey, March 17, 2016. - REUTERS/Sertac Kayar

DIYARBAKIR, Turkey — When Hilmi Akyol returned to his neighborhood four months after fleeing clashes between the Turkish security forces and Kurdish militants, he found his street leveled, all its buildings razed to the ground. He found his one-time home by the greenery of two tons of sprouting wheat.

“I had bought two tons of wheat for the hens and pigeons I used to keep. When I returned after four months, I found the wheat sprouting in the rubble,” Akyol told Al-Monitor. “There was nothing left on our street — a street 200 or 300 meters long with absolutely nothing on it.”

Similar sights have greeted many other Kurdish residents of Diyarbakir’s historic district of Sur, which remains sealed off 10 months after a devastating security crackdown ended there in March 2016.

Once bustling streets lined with residential buildings and shops are nothing more than flattened terrain today. Even though life in Sur had long ground to a halt, a round-the-clock curfew remains in place to keep civilians away as the demolition of damaged buildings continues. The area looks like the site of an urban transformation project.

As early as December 2015, while clashes raged in Sur and the exodus from the area continued, some residents were convinced the government was planning to empty the district and rebuild it to its liking. What sounded like a far-fetched rumor at the time seems more possible today.

Sur, which means “fortress walls” in Turkish, takes its name from the centuries-old walls encircling Diyarbakir’s old city. Home to numerous historical monuments, it won a place on UNESCO’s World Heritage List in July 2015, shortly before the security forces moved in to purge Kurdish militants entrenched behind ditches and barricades in the labyrinthian neighborhood's narrow alleys and dead ends.

Since then, Sur’s mostly impoverished residents have been striving to rebuild their lives in other corners of Diyarbakir. Some, such as 67-year-old shoe-shiner Vahit Cetin, are still struggling to accept the reality of their lost homes.

In a trembling voice, Cetin told Al-Monitor that tank fire destroyed the house where he had spent 60 years of his life and that he still could not bring himself to go back.

“I just don’t have the heart to go and see for myself. I have lived there since I was 7 years old. I’m devastated,” he said. “[The government] has given me nothing, and I don’t want their money in the first place. The prime minister and the president had promised to give us back our homes. I don’t want to live anywhere else. I want my house.”

He insisted, “I’m not giving my house away,” while admitting his sons have told him the place is now “as flat as a football pitch” and all his belongings are gone.

Last week, Al-Monitor managed to sneak briefly into the sealed-off area. The best vantage point is atop the ancient walls, from which an alien panorama was revealed. Only a few buildings remain standing in that part of the old city, among them historical structures and places of worship. Though the clashes have long ended, heavy security measures remain in place, including 24-hour camera surveillance. In the inner areas, some places are cordoned off with concrete bocks.

Several locals, eager to see what has become of the district, anxiously climbed the walls and looked in dismay. Soon the police arrived, having noticed us on the security cameras. As we were led away amid warnings not to repeat the breach, one of the locals murmured, “They’ve done all this and they don’t even let us see it.”

As demolition continues in some parts of Sur, construction has already begun in others, including restoration work at mosques, churches and some other historic buildings. The stated aim of the project, led by the Environment and Urban Affairs Ministry, is to “build a livable Diyarbakir by demolishing structures that threaten the historic fabric.” As part of the project, the government plans to protect 1,000 structures of historic and cultural value and rebuild 8,000 houses along traditional architectural lines.

The Turkish Union of Architects and Engineers Chambers, however, has raised a series of objections to the project. A report by the union’s Diyarbakir coordination group says the renovation plan disregards the historical heritage of the walled city and will give it a “completely different look.” The plan, it notes, was drawn up hastily, while the district remains off limits to residents and civil society.

According to the report, the project rests on “a defense-centered approach” and envisions the constriction of “security services zones” surrounded by eight-meter walls, which would require significant road expansion and damage some of the surviving cultural heritage.

“According to the studies we have made, the plan requires the demolition of 976 structures, including 17 structures with an official protection status and 47 traditional structures worthy of protection, in the areas designated for new roads and police stations,” the report reads.

The explanatory text that accompanied the plan “openly states that the changes are made with security considerations, completely disregarding the irreversible damage that each intervention … will cause,” the report says.

The union has said it will seek the plan’s cancellation in the courts. But as the controversy continues, so does the construction work inside the ancient walls, which bear the traces of 26 civilizations. The prospects of Sur emerging intact from the renovation appear far from promising.