More Kurds forced out of ancient Sur in southeast Turkey 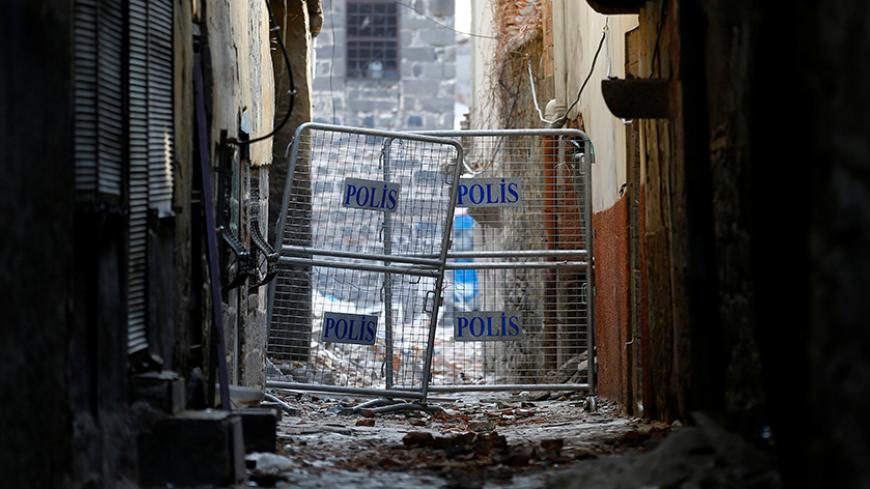 DIYARBAKIR, Turkey — In a narrow street in Diyarbakir’s ancient district of Sur, a young Kurdish boy grips a tiny fish bowl, his eyes moving between it and the commotion around. The single goldfish in the bowl must be his most precious belonging, one that needs to be cautiously taken care of as the family moves from a place it has long known as home. The boy’s mother, Fatma Oner, is bidding farewell to neighbors, reliving another forced uprooting she suffered as a child.

Similar scenes are frequent these days in Sur, a historic quarter inside Diyarbakir’s millennia-old fortress walls, as hundreds of Kurdish families, some of the city’s poorest, evacuate homes that the Turkish authorities have expropriated and slated for demolition. Ankara’s controversial urban transformation plan came atop its ferocious crackdown on urban militants of the outlawed Kurdistan Workers Party (PKK), which devastated Sur, a UNESCO World Heritage site, and other residential areas across the mainly Kurdish southeast. The latest exodus follows the inclusion of two more Sur neighborhoods into the scope of the renewal project after the evacuation of six other neighborhoods, which were at the heart of the clashes.

The distraught Oner recalled how her family sought refuge in Sur three decades ago, when the authorities emptied their villages as part of a drive to deprive the PKK of hideouts and support in rural backwaters. “I was a child when we came here,” she told Al-Monitor, recounting a story that many residents of Sur share. For the Oners’ three-story building in the Ali Pasha neighborhood, which included two commercial compounds on the ground floor, the state has paid only 150,000 Turkish lira ($42,400) in compensation. Oner grumbled as she hurried to the pickup waiting for her.

The neighborhood's residents are leaving their homes for a second time in two years, but this time for good. The area was temporarily evacuated during the clashes, which raged for months until March 2016. The locals had returned home, aspiring for some normalcy, but the urban transformation project dashed their hopes, swallowing another chunk of Diyarbakir’s 10,000-year history.

The walled quarter is Diyarbakir’s poorest area. Most buildings are shanty houses and the rents are cheap. In other words, it is a place where people with no other choice live. Most residents are without stable jobs, surviving on irregular earnings as porters or construction workers. Given the housing prices in other parts of the city, the compensation amounts paid to Sur residents are laughable.

Yildiz Kardas, a mother of four adult sons with their own families, lamented that their three adjacent houses in Sur had been valued at only 200,000 lira ($56,600). This family, too, has also previously known displacement; it has been struggling for years to stay afloat after fleeing a village in the neighboring province of Mardin in the 1990s.

“We are packing up but we don’t have money to move the stuff,” Kardas told Al-Monitor. “Our homes were damaged in the clashes last year, and this year we are in trouble again. I have no idea what I’m going to do. What they do to us is simply cruelty.”

An accommodation of a similar size costs double, 400,000 to 500,000 lira, in other parts of the city, Kardas said with despair. “I spent the night crying. We’ve become refugees in our own land.”

In the neighboring three-story shanty house, similar worries gripped the three families of the Aykac clan, which got only 100,000 lira for the building. “We cannot buy a home with that money. The cheapest ones cost 200,000 lira at least,” the matriarch, Fatma Aykac, told Al-Monitor. “We have kids, three families living here. Isn’t this cruel? I have no idea what we are going to do. We will end up in a tent perhaps.”

Some residents are in even more precarious situations. They are the tenants, forced to leave their homes without even the meager compensation that homeowners receive. Meleksah Umur, a mother of five, is under pressure to move out — by both the authorities and the owner of the place. Three of her children are still students, while her two grownups are jobless. For the Umur family, the rents in other neighborhoods, even the modest ones, are difficult to afford. Moving out of Sur will also mean school-bus fees for the children, she told Al-Monitor, concluding that the family might end up “living in the street.”

Veysi Cakar is another tenant in distress, facing an uncertain future. He lives on social support from the government, unable to work after a heart attack. “I have no income. I live on a disability stipend. I don’t know where to go,” he said.

Cakar has tried to make his pleas heard, but to no avail. “I wrote twice to the prime ministry but got no response. I also telephoned them twice and they said they would take care of it but nothing came out. So I gave up. If this is a social state, it has to take care of its citizens,” he grumbled.

About 7,000 people are affected by the new evacuations in Sur. Thousands of others had left in the first stage, which saw six neighborhoods completely emptied. The demolition of nearly 2,000 buildings in those areas is going on. The residents of the ancient district are leaving in gloom, leaving behind a difficult past and facing a future that will be hardly any easier.