The air of secrecy surrounding an urban renewal project in Turkey’s largest Kurdish city sparks anxiety among local residents, already stripped of their homes amid devastating clashes between Kurdish militants and the security forces. 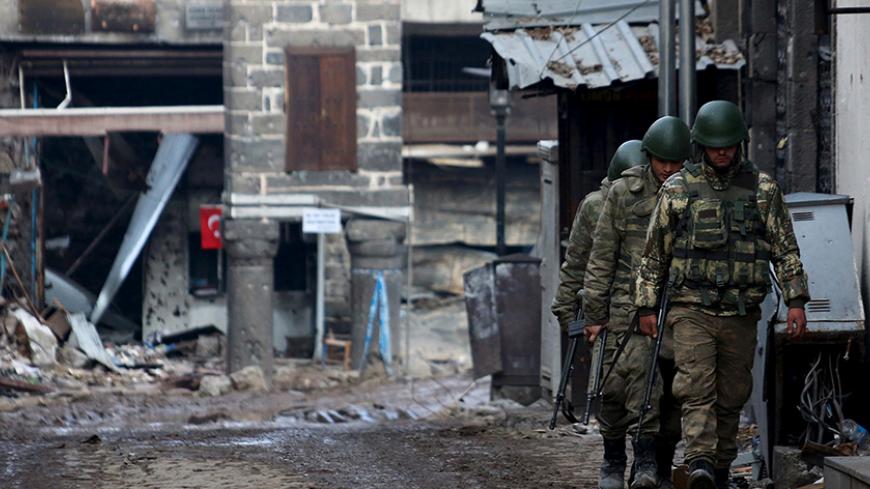 Turkish soldiers patrol in Sur district, which is partially under curfew, in the Kurdish-dominated southeastern city of Diyarbakir, Turkey, Feb. 26, 2016. - REUTERS/Sertac Kayar

DIYARBAKIR, Turkey — In December 2015, armed clashes raged inside the ancient walls of the district of Sur, the historic heart of Diyarbakir in mainly Kurdish southeast Turkey. Using heavy weapons and even tanks, the security forces battled to regain control of residential neighborhoods, where young militants loyal to the Kurdistan Workers Party (PKK) entrenched themselves behind ditches and barricades. A group of journalists, including this reporter, were touring areas exempt from the round-the-clock curfew imposed on the district when a local resident approached and asked a strange question: “When will the urban transformation finish?” The question made no sense at the time, but the man insisted the clashes had to do with an urban transformation plan.

The topic popped up again a few days later as journalists conversed with a group of people who were forced to flee their homes amid the mass exodus from Sur. The locals were convinced the security operations were more about emptying Sur ahead of an urban transformation drive rather than battling the PKK. As implausible as it sounded, the government’s alleged intention to empty and rebuild Sur in its own way was soon the talk of the town.

Sur, which means “fortress walls” in Turkish, takes its name from the centuries-old walls encircling the old city of Diyarbakir, which was added to UNESCO’s World Heritage List last year, shortly before the unrest broke. Home to some 125,000 people, half of them residents of the ancient walled city, the district is dotted by numerous historical monuments and houses of traditional architecture. Its labyrinth-like neighborhoods, crisscrossed by narrow alleys and dead ends, have proven convenient for PKK militants to hide, escape police raids and organize. At the height of the Kurdish conflict in the 1990s, many impoverished people from villages emptied or burned down by the army settled in Sur, which offered the PKK a fertile base to rally support and recruit members.

The district emerged in ruins from the security operations, which ended after 103 days in early March. Yet the curfew remained in place as heavy-tonnage trucks moved in to remove debris. Still barred from their neighborhoods, the anxiety of locals grew. They knew something was going on, and soon, the alleged urban transformation plan turned out to be true. In late March, the government issued a decree for the expropriation of some 7,000 plots in Sur, corresponding to more than half of the district’s land. Residents now fear losing homes and shops in return for low compensation, while many believe the government plans to destroy the human fabric of the area.

Kemal Akyol, a 70-year-old Kurd who has resided in Sur for five decades, owns a 10-room traditional house in the district. He believes Sur residents are being victimized, and he worries more about ancestral legacies than material issues. “I won’t sell my house even if they give me a trillion. It’s an old, beautiful structure with 10 rooms, which are all empty now,” Akyol told Al-Monitor. “They can move us out only after killing us. I don’t want to leave Sur, no matter what place they offer me in return.”

Another Sur resident, Mehmet Celik, said both his shop and house were destroyed, but he vowed to stay on. “We won’t give away our properties even if we have to live in tents,” he said, adding he would go as far as the European Court of Human Rights if his properties are forcefully seized.

Civic society in Diyarbakir is also up in arms. More than 300 nongovernmental groups and civic leaders issued a joint statement last week, denouncing the expropriation move. Serefhan Aydin, chairman of the Diyarbakir Architects Chamber, a signatory of the joint statement, told Al-Monitor the chamber would initiate a lawsuit to stop and cancel the expropriation decree.

According to Mehmet Kaya, head of the Diyarbakir-based Tigris Social Research Center, urban renewal may have not been an original purpose of the operations, but recent developments reveal “something different that goes beyond security.”

Speaking to Al-Monitor, Kaya said, “The fact that almost all of Sur is being expropriated without any explanation and consultations [with locals] has inevitably fueled concern, showing that the fears are not groundless. Although the curfew was lifted and all sorts of security measures were put in place, [the authorities] continue to speak of security concerns. This leads people to stay away from Sur, and businesses, in turn, become incapable of paying their rents. All this is evolving into a process of abandoning Sur.”

The air of secrecy, Kaya noted, suggests that a plan withheld from residents, civic society and the Kurdish-held local administrations is underway. “If they intend real rehabilitation in the wake of the clashes, this cannot be the method to do it,” he said.

Kaya worried that the drive resembled the forced resettlement of Kurds in the early years of the Republic. “That was not the sole purpose of the security operations, but the methods employed since the closing stages of the operations are laying the ground exactly for such a move,” he said, stressing that nearly 500,000 Kurds have been displaced across the southeast since the urban clashes began last summer. “If you act so insensitively as if encouraging the displacement of 500,000 people, while developing accommodation policies for Syrian refugees, no other explanation seems possible,” he added.

As the fears grew, the government sent three ministers to Diyarbakir to soothe the anxiety. On April 1, Prime Minister Ahmet Davutoglu himself visited the city and pledged that no one would be victimized under the urban renewal plan. He promised that property owners would be able to overhaul their buildings as they wish according to architectural plans and that residents, including those who dwell in decrepit shanty houses, would get “modern homes under the best conditions.”

How the promises play out remains to be seen, but the government’s record in this field is less than flattering. Urban renewal projects, especially in Istanbul, have uprooted entire communities and caused serious damage to the fabric of historic settlements.

In Sur, trucks continue to move out debris from sealed-off neighborhoods, almost a month after the operations ended, as locals wonder what will be left behind for renewal.