What killing of Kurdish human rights lawyer means for Turkey

In turbulent Turkey, the voices of peace and coexistence speak out at the risk of violent retribution. 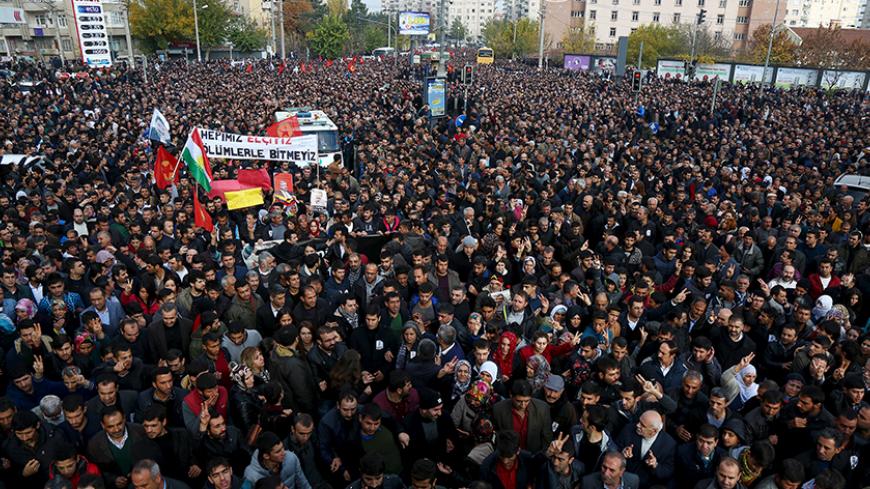 Sur is the 7,000-year-old historic district of the southeast Anatolian city of Diyarbakir. Its well-preserved Roman fortifications bear the marks of several civilizations that came to life by the banks of the Tigris River. Inside the historic walls are mazelike streets lined with ramshackle one-story houses painted in the brightest shades of pink, blue and yellow. On a typical day, the main artery is filled with vendors selling everything from vegetables and school supplies to CDs of Kurdish music. Until over a year ago, foreign tourists could be found scavenging around the numerous historical sites tucked away in the small alleyways.

Then came the advances of the Islamic State in bordering Iraq and Syria, such as its capture of Mosul in June 2014, scaring away potential visitors. Even worse has been the renewed violence between the Turkish state and the Kurdistan Workers Party (PKK) since July, engulfing the district in violence not seen since peace negotiations started in 2013. A few days ago, Sur was shocked by the assassination of Tahir Elci, prominent human rights lawyer and the head of Diyarbakir’s bar association.

On the morning of Nov. 28, Elci stood in front of the bullet-ridden Four-Footed Minaret – a 500-year old mosque minaret whose unique split legs symbolize the four sects of Islam. Regarded as a symbol of unity within the religion, the minaret is also believed to bestow luck on all who walk beneath its legs. It was badly damaged last week in clashes between the police and members of the Patriotic Revolutionary Youth Movement (YDG-H), a group involved in urban guerrilla operations and ideologically affiliated with the PKK.

"The historic minaret is calling out to humanity," declared Elci. "It is saying, 'They shot me in my feet. I have seen wars and disasters but have never seen such betrayal.'"

Like other Kurdish towns, Sur witnessed senseless violence erupt over the summer. A bomb detonated by IS in the border town of Suruc killed 33 members of socialist youth federations in July. The PKK retaliated by killing two police officers it claimed had links with the terror group. The peace process collapsed. The government launched widespread anti-terror operations while dozens of security personnel were killed in PKK attacks. Hundreds of Kurdish politicians and activists have been arrested. In what was largely seen as a political move to win back the Kurdish vote lost in June by offering the population with a choice between stability or conflict, Kurdish towns like Silvan, Cizre and Nusaybin were targeted in curfews and harsh operations under a complete media blackout. Such draconian measures continue to this day.

Journalist Fatih Pinar documented the situation in Sur, which was put under curfew for four days in October. In his video, traumatized residents describe the killing of Helin Sen, a 12-year old girl shot by the police on her way to a bakery during curfew hours. A man describes how he lost all his animals that were terrified by the sounds of the clashes. One young boy summarizes the events with an odd smile on his face: "There was war here for four days." After the curfew was lifted, sporadic clashes continued between security forces and the YDG-H, damaging historical sites. On Saturday, Elci called for "wars, arms, clashes, operations" to end "in this common site of humanity, which was home to numerous civilizations."

In the last decade, several Kurdish mayors made significant efforts to restore the multicultural heritage of Sur, which is home to Syriac and Chaldean churches, synagogues and mosques built over centuries. The most significant was the 2011 restoration of Surp Giragos, one of the largest Armenian churches in the Middle East. Since then, the church has attracted Armenians from all over the world searching for their roots in the city that was home to their families until the tragedy of 1915. The man most credited for the restoration, former Sur Mayor Abdullah Demirbas, was among hundreds arrested in August for alleged links to the PKK.

Elci, who defended Demirbas on several occasions, embodied the same humanistic values. He worked tirelessly on cases of torture and forced disappearances that took place during the state’s security operations of the 1990s. Some of his most arduous work was in defending the rights of religious minorities. Nurcan Baysal, a columnist for the website T24, quoted the sentiments of Gule Simsek, a Chaldean woman whose husband disappeared in 1993. She said that Elci, who was their lawyer, "was not important just for the Kurds. He was important for people from every identity, religion, ethnicity in Kurdistan."

Elci had recently entered the spotlight for his statement that the PKK was not a terror group but rather an armed political movement. Soon after, he was arrested for engaging in terrorist propaganda but released pending trial. A brutal media campaign targeted him with death threats and insults. On his Twitter account, he was defiant, writing, "Whoever is afraid of you is as vile as yourself."

He held that his statement did not suggest blanket sympathy for the PKK but was rather an outcry directed at nationalists that an organization with a vast social base among Turkey’s Kurds couldn’t be eradicated by security measures. In one of his last interviews with Aydinlik newspaper in October, he had criticized the organization’s guerrilla strategies of digging trenches, building barricades and forcing children to boycott school. The PKK’s "people’s war is against the people," he said. "It damages the foundations of coexistence."

While an investigation has been opened, there is little hope that his true killers will be identified. While pro-government newspapers such as the Daily Sabah place the blame on the PKK, Peoples' Democratic Party co-chair Selahattin Demirtas claimed that a police bullet killed Elci. Tragically, Turkey’s scarred political history is no stranger to killings of prominent figures whose honest politics of moderation threaten certain interests in society or the state. The case of Armenian journalist Hrant Dink, who dedicated his life to peace and was shot in front of his office in 2007, remains unresolved after almost a decade.

In his final message, Elci asserted that societies that do not own their history cannot build secure futures. Both the history he wanted to protect and the future he wanted to build were ones of peaceful coexistence. As Turkey enters another political episode defined by violence and confrontation, it is such voices of peace and moderation that are in the greatest danger. With their silence, the already too fragile bonds of society are at risk of irreparable damage.