Israel gave notice of seizure of two new archaeological sites in the West Bank, in an endless series of targeting such sites in Palestinian areas. 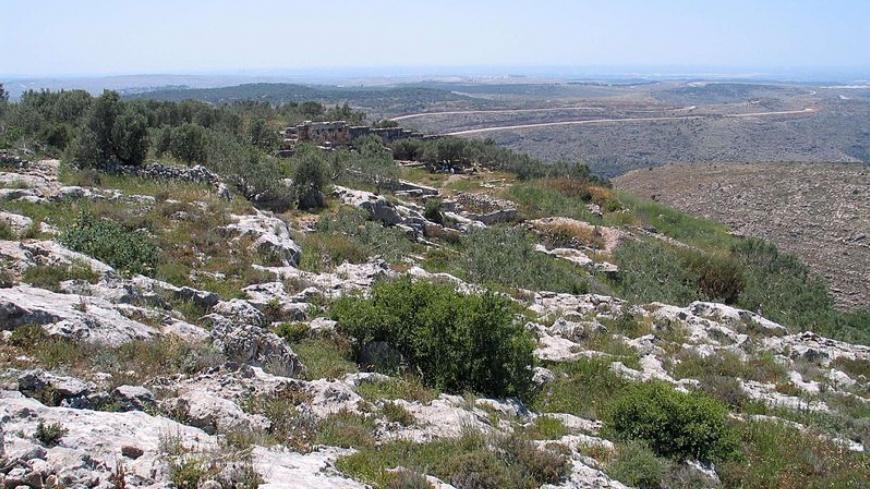 The ruins of a Byzantine monastery are adjacent to the settlement of Peduel in Salfit governorate in the West Bank. - Bukvoed/Wikimedia

RAMALLAH, West Bank — On Sept. 4, Israeli authorities issued an official notice in Hebrew announcing their intention to seize the archaeological sites of Khirbet Deir Samaan and Deir Qala, in the west of Salfit governorate in the northwestern West Bank, giving the residents 60 days to object to the decision.

The area of Khirbet Deir Samaan is approximately 6 dunums and 57 square meters (1.5 acres) , while the area of Deir Qala is 17 dunums (4.2 acres), and they represent two of the most prominent archaeological areas in Salfit.

The notice is the first step toward the full seizure of the two archaeological sites located in the villages of Kafr al-Deek and Deir Ballut, which are among the most prominent Roman and Byzantine archaeological monuments in the Palestinian territories and are 1,500 to 1,600 years old.

Khirbet Deir Samaan contains the ruins of an ancient Roman fortress. It has ruins of monasteries, water wells carved in rocks, mosaic-paved paths and water pools. It holds a strategic position given its elevated location overlooking the Palestinian coast.

The Leshem settlement surrounds the archaeological site on three sides and the ruins have been subjected to large excavations and looting by Israeli settlers. The site is located in Area C, which is subject to full Israeli security and administrative control.

Meanwhile, Deir Qala contains ruins of columns that indicate that its monastery was connected to the main kingdom in Sebastia, in addition to the ruins of a church, a mihrab (mosque wall niche) and worship rooms; it has been subjected to major excavations, as the Peduel settlement is only 100 meters away.

Salfit has been under increasing pressure from settlements; it ranks second to Jerusalem in terms of the size of settlements and confiscation of land. Settlement construction in Salfit began in 1975 with the establishment of many outposts, which quickly expanded in the governorate’s lands, some of which became the size of a large city, such as the settlement of Ariel, one of the largest settlements in the West Bank. Ariel sits on a 12,000-dunum (4.6 square miles) area and is inhabited by 20,000 settlers.

Khirbet Deir Samaan is located on agricultural land owned by Fares al-Deek, a Palestinian from Kafr al-Deek town, who told Al-Monitor that he was shocked by the Israeli notice published in Israeli media.

The notice declared the appropriation of the Deir Samaan and Deir Qala sites and their restoration to serve the public, in reference to Israeli settlers, and using the sites as recreational areas and archaeological gardens for settlements.

Deek, who travels daily to his land, pointed out that this notice is paving the way to seize his land and archaeological ruins and annex them to the Leshem settlement. He said he will resort to the Israeli High Court of Justice in the coming weeks to appeal the military decision in cooperation with a lawyer from Yesh Din, a human rights foundation established in Israel in 2005 that works to protect the rights of Palestinians in the West Bank who are subject to the Israeli military governance system.

He added that he already held a meeting with two volunteers from Yesh Din who visited him at his home Sept. 10, and that it was decided to lodge a complaint with the Israeli High Court of Justice as soon as the required documents and data are collected.

On the other hand, Deek criticized the negligence of the Palestinian official institutions for the Deir Samaan site, saying, “I have been appealing to the official authorities since 2010, specifically the Ministry of Tourism, to help us preserve the site, but it did not lift a finger.”

Deek noted that officials at the Ministry of Tourism and Antiquities, despite their intention to send a letter to UNESCO and international associations, did not even bother heading to the site or talking to him as the landowner.

Since the occupation of the West Bank, Israel has launched a fierce onslaught when it comes to archaeological sites, and it has established several settlements at those sites, such as the settlement of Shiloh at the archaeological site of Tel Silon, a Canaanite city north of Ramallah, and Leshem, surrounding Deir Samaan.

The Israeli campaign to seize archaeological sites is ever-ongoing, reaching a peak July 20 when Israeli forces seized a baptismal relic from the town of Tuqu in the Bethlehem governorate; the antiquity which is 1,600 years old and weighs seven tons.

Israel has largely benefited from the division of the West Bank into three areas (A, B and C) under the Oslo Accords. This helped it to control and loot archaeological sites without supervision by the Palestinians, especially in Area C, which is subject to full Israeli control and represents 60% of the area of the West Bank. Israel has also managed to seize dozens of archaeological sites and destroy others while constructing the apartheid wall.

Saleh Tawafsha, the director-general of the antiquities preservation department at the Palestinian Ministry of Tourism and Antiquities, told Al-Monitor that approximately 55% to 60% of the archaeological sites in the West Bank are located in Area C, noting that Israel’s decision to seize the Deir Samaan and Deir Qala sites is part of a fierce siege on archaeological sites to impose Israeli control.

“The occupation’s decision to seize Deir Samaan and Deir Qala violates all international laws and conventions such as The Hague and Fourth Geneva conventions and Security Council and United Nations resolutions that prohibit the occupying power from seizing, annexing and destroying cultural property in the lands it occupies,” he added.

Tawafsha stressed that the Ministry of Tourism is documenting Israeli attacks on archaeological sites, and communicating with international institutions, particularly UNESCO, regarding these violations, to demand that they protect these sites and oblige Israel not to seize them. He added that a letter was drafted regarding Deir Samaan and Deir Qala and addressed to UNESCO through the Palestinian Foreign Ministry.

Hanan Ashrawi, a member of the Executive Committee of the Palestine Liberation Organization, condemned the Israeli notice to seize Khirbet Deir Samaan and Deir Qala in a Sept. 6 statement.

“These illegal and immoral practices come in the framework of the occupation state’s policy, which is based on the organized looting and the systematic theft of the cultural, historical and religious heritage,” she said, adding, “This dangerous decision has been planned for nearly 10 years, and aims to annex these two sites to the illegal settlements surrounding them.”