Violations carried out by Israeli settlers are destroying historic sites in Palestine in what many see as an attempt to bury Palestinian historic and cultural heritage. 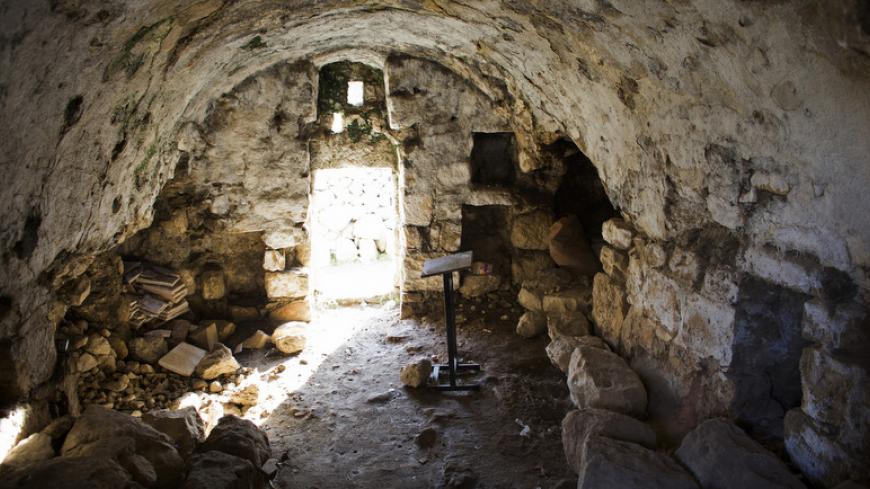 A room, which is part of an archaeological site, is seen in the Jewish settler neighborhood of Tel Rumeida, in the divided city of Hebron in the occupied West Bank, Jan. 19, 2014. - REUTERS/Ronen Zvulun

Saleh Tawafsha, general director of the Ministry of Tourism’s Department of Antiquities Protection, told Al-Monitor, “Deir Samaan is an archaeological landmark that dates back to the Roman period. It consists of several monuments such as residential buildings, a church and mosaic floors. Since 1967, Israel has been fiercely attacking these archaeological sites. It has established several settlements like the Shilo settlement, built over 'Khirbet Ceylon,' a Canaanite city and archaeological site, north of Ramallah, as well as the Leshem settlement that encircles Deir Samaan.”

Khaled Maali, a researcher in settlement affairs who is closely following the situation in Deir Samaan, told Al-Monitor, “The settlers are digging around the archaeological site and changing its features. They set up buildings near it and created roads to access the site, which the settlement borders.”

The village of al-Walaja, located southwest of Jerusalem and inside the Green Line, has also been exposed to a targeted campaign set up by occupation authorities. The campaign aims to seize the land and relics and build touristic sites and a public park. Al-Walaja is exceptionally scenic and has 18 natural water sources.

The appeal of this village, whose territory extends into the West Bank, is the presence of those 18 springs. This includes Ain al-Haniyeh, a spring that is located at the armistice demarcation line, or the virtual separation agreed upon by Israel and Arab countries following the 1948 war. The village is subjected to Israeli drilling, exploration and theft of artifacts. Israel ratified a decision to create a garden called Refaim that spreads over 5,700 acres of the village and 1,200 acres of the territories occupied in 1967.

Tawafsha said that the occupation authorities announced the establishment of 12 public parks on archaeological landmarks in the West Bank, including in the village of al-Walaja and on Mounts Gerizim and Ebal, between which Nablus is located. This represents “an Israeli piracy and assault that violated international law and norms, which prohibit tampering with the monuments of the occupied territories.”

The division of the West Bank under the Oslo Accord into three zones (A, B, C) contributed to Israel's control over archaeological sites and the looting of landmarks that are not supervised by Palestinians, especially in Area C, which is completely under Israel’s control and represents 60% of the West Bank, as well as the apartheid wall, which allowed for the seizure and destruction of dozens of archaeological sites.

Mohammad Jaradat, coordinator of archaeological data at the Palestinian Department of Antiquities and Cultural Heritage, told Al-Monitor that according to the national list, which is to be published by the ministry once the parliament ratifies a new law on tourism and touristic sites, “There are approximately 7,000 archaeological sites in the West Bank and the Gaza Strip, 53% of which are located in Area C and in which Palestinians are forbidden to conduct exploration, restoration and development.” Meanwhile, Israel has turned some of these landmarks into touristic sites, such as the caves of Qumran, north of the Dead Sea and “Khirbet Susiya” (“Susya”) in the city of Hebron, while settlers or artifact thieves steal from other sites. In addition, certain landmarks are given a religious character based on biblical narratives, according to Jaradat. This applies to Mount Ebal, where the altar of Joshua is said to be, and the Bilal bin Rabah Mosque (Rachel's Tomb) in Hebron.

Israel resorts to biblical tales, like the exodus from Egypt and the journey to Palestine, for instance, and changes the names of archaeological Canaanite, Byzantine and Islamic sites to biblical names. Israel also claims that the tomb of Joseph at Nablus holds the relics of the Prophet Joseph.

“The settlers are setting up buildings close to the archaeological sites, toward which they are creeping up, in an attempt to control them in order to claim that they have a historical right over the Palestinian territories, where there are about 223 archaeological sites within the settlements in the West Bank, some subjected to total destruction — such as the Um al-Jamal site — and others partially destroyed to make way for the construction of settlements. This is in addition to the 1,100 archaeological landmarks ruined and destroyed by the erection of the wall,” said Jaradat.

“The settlers are taking control of the archaeological sites, which they believe to be linked to the biblical references, which they use as propaganda, and they take this as a pretext for them to build settlements and take over the land,” he added

Palestinians are facing several problems as a result of the Israeli looting of the Palestinian archaeological landmarks. Tawafsha explained that the main obstacles to Palestine’s management of tourist sites are represented by “Israel denying the Palestinian authorities access to archaeological sites located in Area C or behind the wall, which impedes providing the necessary protection from artifact thieves, and the monitoring of violations in order to submit them to international organizations, especially UNESCO, in addition to turning archaeological landmarks into touristic sites.”

“The issue of archaeological sites is linked to the negotiations regarding borders and territories with Israel. Although we are not allowed access to these landmarks, which are being drained by Israel, the settlers and artifact traders, we call on UNESCO, of which we became a member, to pay attention to what is happening to our archaeological sites,” said Jaradat.

Regarding Israel's narrative of the archaeological sites, director of tourism and antiquities in the Islamic Waqf in Al-Aqsa Mosque, Yousef Natsheh, told Al-Monitor, “Israel is exploiting these landmarks to serve its political objectives. Israeli institutions and departments collude to prove the biblical narrative about archaeological sites and support active right-wing associations, such as Elad association, to implement one-sided projects to marginalize the Palestinian-Arab side of the story and confirm the Zionist narrative.”

Natsheh pointed out that Israel is earmarking significant budgets and conducting studies so as to control the archaeological sites, give them a Jewish character and separate them from their Arab surroundings, as happened in the Moroccan Quarter, the Holy Basin and the Mount of Olives in Jerusalem.

In light of the peace process falling flat and the continuation of Israel's control over the land, the Palestinian leadership relies on its membership in UNESCO in order to expose the Israeli violations. This was seen in practice in 2010 when UNESCO condemned Israel's adding the Cave of the Patriarchs (also known as the Ibrahimi Mosque) in Hebron and the Rachel's Tomb (Bilal bin Rabah Mosque) in Bethlehem to the national heritage sites of Israel and considered it a violation of international law and UNESCO and UN resolutions. Despite the violations, though, UNESCO voted on giving the Church of the Nativity in Bethlehem and its pilgrimage route World Heritage status in June 2012, thus protecting the said site.

In light of the persistent Israeli violations on archaeological sites, thousands of human and historical relics of ancient civilizations that were, thousands of years ago, upon the land of Palestine are now threatened with extinction, destruction or conversion.