The New Pope and Palestine

Palestinians are hoping Pope Francis will continue the Vatican's support for the Palestinian cause, Daoud Kuttab writes. 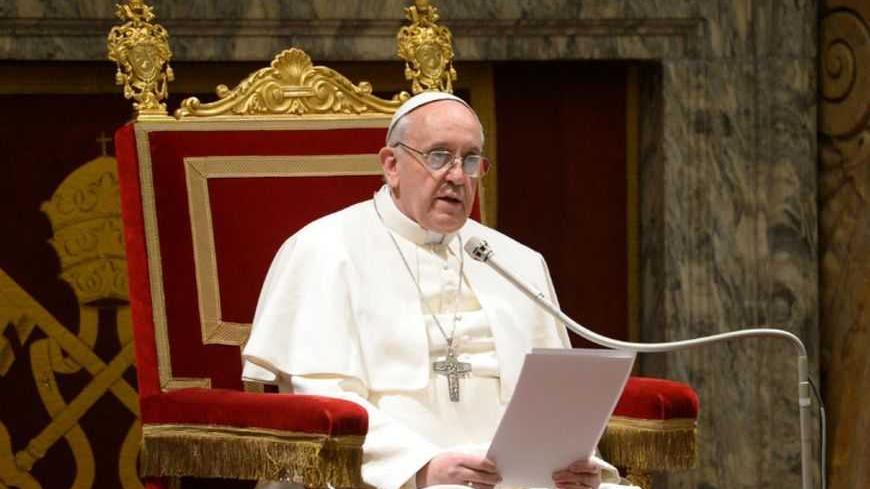 Electing the leader of the world’s Catholic faithful is always an unpredictable affair. The choice of Argentina’s cardinal, now Pope Francis, has lived up to the mystery.

What concerns people the most is the political direction that the leader of the world’s more than 1 billion Catholics will take on issues such as women’s rights, relations with other faiths and foreign policy.

Palestinians and peoples of the Middle East have been searching hard in the new pontiff’s history to try and figure out where he will stand on the issues that are of concern to them.

Two issues were prominently talked about in this regard. The Jesuit background of the new pope was quickly picked up as a sign that the new leader of the Catholic Church will pay attention to socio-economic issues and not just theological ones.

In the Middle East, Jesuits are known to have established schools of higher education and other projects supporting the poor. His coming from a non-European country (apparently the first time in a millennium) also ensures, many believe, a more internationalization of the Vatican.

The Palestinian leader who congratulated the new Pope was naturally quick to invite the Holy Father to visit the birthplace of Christianity. The congratulatory cable to the Vatican included an invitation to the pontiff to visit Bethlehem. Pope Benedict, as well as Pope John Paul, had visited the Holy Land, including an important visit to the Palestinian city of Bethlehem.

The Vatican has generally been supportive of Palestinian rights and the need to end the occupation of Palestine. But equally the leaders of the Catholic Church have placed tremendous efforts to improve relations with Israel and also with world Jewry.

A recent agreement between the Vatican and Israel was signed that resolved a number of issues regarding Catholic holy sites in Jerusalem and the status of priests in Jerusalem and the area. Some felt that Vatican gave too much to the Israelis, especially allowing them control over the Last Supper room.

The compromise in which the Vatican will retain a symbolic seat on the table was seen as too much of a compromise to an occupying power that took sovereignty by military control.

The Vatican’s auxiliary bishop in Jerusalem, William Shomali, a Palestinian, told the National — an English language newspaper based in Abu Dhabi — that  he hoped the new leader would continue with the church's policy of addressing the difficulties facing Christians in the region, especially in countries such as Iraq, where many have been forced to flee because of sectarian fighting.

Bishop Shomali also expressed optimism that Pope Francis' Argentine nationality could help breathe new life into the Israel-Palestinian peace process because, he said, Argentina "was a friend of the people of the holy land."

But perhaps the most important issue of interest in the region is the possibility and potential of Catholic/Christian relations with Muslims. Pope Benedict caused a rift in relations with a statement in 2006 in which he quoted an anti-Muslim thinker’s statement on Islam.

The head of Islam’s leading higher educational institute, Al-Azhar, was quick to welcome the new Pope Francis and has called for change. "We are hoping for better relations with the Vatican after the election of the new pope," said Mahmud Azab, an adviser to Ahmed al-Tayyeb, grand imam of Al-Azhar.

Arab Christians, while dwindling in numbers, are still an important influential group on Arab nationalism and intellectualism. Christians in areas such as Lebanon, Iraq and Palestine will be looking closely as to what the Catholic Church under Pope Francis will say and do in order to stem the migration epidemic and to encourage remaining Christians to stay in their countries.

Palestinian Christian leaders have been insisting that the emigration problem is turning holy sites and churches into dead rather than living stones. The need to encourage and empower this dwindling group is much bigger than their percentages in society.

Daoud Kuttab is a contributing writer for Al-Monitor's Palestine Pulse. A Palestinian journalist and media activist, he is a former Ferris Professor of journalism at Princeton University and is currently the director general of Community Media Network, a not-for-profit organization dedicated to advancing independent media in the Arab region. Active in media-freedom efforts in the Middle East, Kuttab is a columnist for The Jordan Times, The Jerusalem Post and The Daily Star in Lebanon, and has co-produced a number of award-winning documentaries and children’s television programs.