Daoud Kuttab reports on US President Barack Obama’s visit to Bethlehem, and the people's mixed reaction. 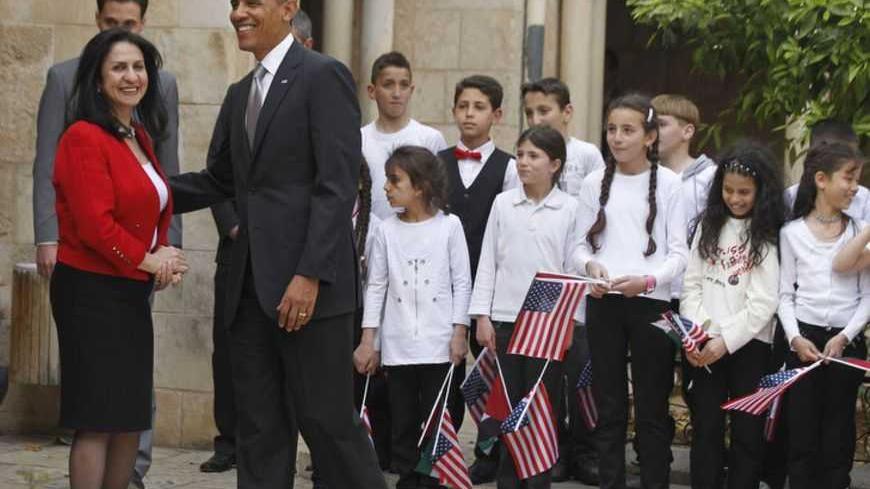 US President Barack Obama is seen next to Bethlehem Mayor Vera Baboun (L) and children at the Church of the Nativity in Bethlehem, March 22, 2013. - REUTERS/Jason Reed

BETHLEHEM, West Bank — The mayor of Bethlehem, Vera Baboun, was sure that the khamsin sand storm that hit the area on Friday was divine.

Speaking to Al-Monitor from her Bethlehem home, the mayor said that the sudden weather change was a divine act, forcing the US president to travel by car into Bethlehem rather than by helicopter. Why is this important, she asked rhetorically? By driving, Obama would have no choice but to see the wall surrounding the city. It was as if, she said, “God willed that Mr. Obama enter from the gate of reality, rather than from the sky of no reality.”

While the mayor was meeting and briefing the US leader, Palestinians were standing in a silent demonstration behind well-protected barriers. The mayor said that at other times she and her children would be part of such demonstrations that criticize the silence of the US and the West about what is happening to Palestinians.

In another part of Bethlehem, closer to the location where Obama’s helicopter was supposed to land, another Palestinian demonstration was taking place. This one was louder and more direct in its opposition to the visit of Obama for the decision his country has taken in the UN against Palestinian statehood. Two lines of well- equipped Palestinians were locking hands, preventing the demonstrators from getting any closer to the street where the presidential convoy was supposed to pass.

One group of women, however, was allowed past the security barrier. They were mothers and sisters of Palestinian prisoners, each holding a portrait of a son or husband who is held behind Israeli bars. You could tell that the Palestinian security, many of them who probably spent time in Israeli jails, had a soft spot for these women.

The mother of Issa Abed Rabo said that her son, who was imprisoned before the Oslo Accords, is 52 years old, having served 21 years behind bars. She repeated almost verbatim an interview that she said took place with Israeli president Shimon Peres, the architect of the Oslo Accords and one of its Nobel peace prize winners. The dialogue ended with Peres admitting that he had agreed to the release of all Palestinians held before the signing of the Oslo Accords. “All peace agreements are signed with a condition that prisoners of war are released,” she said empathically.

Once the news of the change of transportation mode reached the demonstrators, the Palestinian protesters started thinning out, many of them returning to the nearby Dheisheh refugee camp. Ali, one of the returning demonstrators, joked as he skipped and ran in the empty road, “This brings back memories of Israeli-imposed curfews. We never followed the orders to stay home and we used to go out in the street and play football in the carless roads," he told a group of local journalists.

After finishing her brief about Bethlehem, the city’s first female mayor presented Obama with a hand-carved olivewood Nativity statue that contains a prayer for peace. He was welcomed by the heads of the traditional churches: the Orthodox, Catholic and the Armenians. The mayor noted the conversation with one of the church leaders. The Armenian bishop urged the president to be different than his predecessors, and carve his name in gold as having made peace, even though time is running out, she related. The president listened carefully and asked the bishop to pray for him.

The president himself had some time to pray at the grotto where Christians believe Jesus was born. The mayor said that Obama spent five minutes in solitude, praying where Christianity began.

Less than an hour after entering into the Palestinian town of Bethlehem, the US president and his entourage left by car for Ben Gurion Airport. A ceremony planned for him by the Israeli leaders was cancelled due to the delay and inclement weather.

The same sources also say that Obama will most likely seek help from the Jordanian monarch and possibly suggest that the Israelis release some prisoners,  including some of those incarcerated before the Oslo Accords. If this does happen, the mother of Issa Abed Rabo will be happy that Obama came to Bethlehem.

Daoud Kuttab is a contributing writer for Al-Monitor's Palestine Pulse. A Palestinian journalist and media activist, he is a former Ferris Professor of journalism at Princeton University and is currently the director general of Community Media Network, a not-for-profit organization dedicated to advancing independent media in the Arab region. Active in media-freedom efforts in the Middle East, Kuttab is a columnist for The Jordan Times, The Jerusalem Post and The Daily Star in Lebanon, and has co-produced a number of award-winning documentaries and children’s television programs.