Bethlehem's inns may be full this time of year, but the city's mayor still faces a slew of deep-seeded problems, writes Daoud Kuttab. 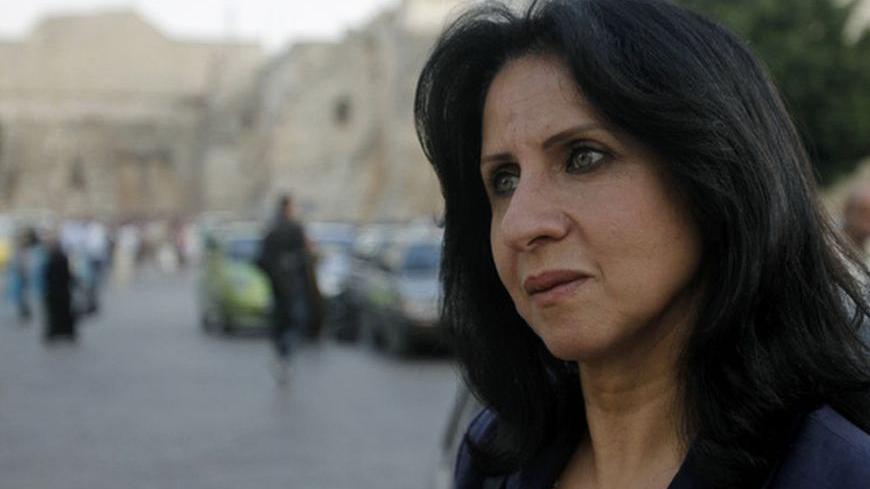 Vera Baboun stands near the Church of the Nativity in the West Bank town of Bethlehem. - REUTERS/Mohamad Torokman

When the leadership of the Fatah movement nominated little known Bethlehem University English literature Professor Vera Baboun to run for mayor of the city, few expected her to win. She ran against well-known male candidates as well as individuals supported by Islamists and left-wing Palestinians. But she surprised all on Oct. 20 and won the office of mayor along with the majority of the city’s 15 council seats.

Bethlehem’s first ever female mayor takes over a city that has been restricted from any international aid because the previous mayor, Victor Batarseh, a supporter of a left-wing Palestinian faction won the mayorship by aligning himself with supporters of the Islamic Hamas movement.
Baboun, a mother of five, is running the Biblical city which has very little room for expansion. Bethlehem rose to prominence when its local inns were too full to allow Joseph and the Virgin Mary to give birth to Jesus. Today the city’s 33 hotels, including 12 built in 2012, are also full this Christmas season.
Christmas in Bethlehem is celebrated three times annually. In addition to the celebrations that are based on the Gregorian calendar on Dec. 25, Orthodox Palestinian Christians commemorate the birth of Christ on Jan. 7 while Armenians celebrate on Jan. 19.
For every denomination certain protocols are observed strictly in the city. The spiritual leader of these denominations come from Jerusalem to Bethlehem and are greeted by local political and popular leaders.
In his annual Christmas message, Latin Patriarch of Palestine and Jordan Fouad Twal said that there is an urgent need to find a “just and peaceful solution to the Palestinian issue.” He also said that the second and last mandate of President Barack Obama must push him to immediate action in working for the two-state solution.
Twal will arrive in Bethlehem the afternoon of Dec. 24 and will be following strict protocol that has been in effect since the Ottoman period. The patriarch will be greeted at a number of spots on the main road to Bethlehem by the by the Palestinian Authority’s Bethlehem Governor Abdel Fattah Hamiel and the mayors of the Bethlehem district cities of Beit Jala and Beit Sahour.
Local Christians and visiting tourists will also enjoy Christmas carols sung by local and international choirs on Christmas eve at Manger Square and invited guests, including Mayor Baboun and Palestinian President Mahmoud Abbas along with consuls from European countries, will attend midnight mass.
The same protocol known locally as the statico (short for status quo) will be observed for the Orthorodox and Armenian Patriarchs.
Bethlehem this Christmas will be seen in a slightly different political outlook. Ever since the Israeli army withdrew from the center of the city in 1995, the Palestinian Authority has been conducting all the affairs of the city and overseeing the Christmas celebrations. The UN vote this year declaring Palestine as an Observer state puts the city in a slightly different status. Mayor Baboun, Patriarch Twal and Palestinian President Abbas have all spoken publicly about the significance of the UN vote.
President Abbas traveled to Rome mid-December for that reason. Pope Benedict XVI received Abbas who was visiting Italy to give thanks to those who on Nov. 29, voted in favor of recognizing Palestine as an Observer State at the UN.
The happy celebrations of the birth of Christianity in the Palestinian town of Bethlehem, however, will not reduce the worry and concern of Palestinians who are facing economic hardships as well as the absence of any political horizon. Palestinian teachers in Bethlehem and the West Bank went on general strike for two days Dec. 20 and 21. Most public employees have been promised half salaries for the previous month after Christmas.
Politically, the Israeli settlement frenzy is also felt throughout the city. The promises of a contiguous independent Palestinian state are being dashed as Israel announced extensive settlement activities on some of the few remaining strips of land that can tie Bethlehem in the south of Jerusalem to Ramallah in the north. Without such connectivity, the potential for a Palestinian state in the West Bank with easily connected road network becomes bleaker. The city of Bethlehem itself is facing major hardships as its ability to expand also to the south and east are being restricted by Israeli policies in areas C that are under its full security and administrative control.
The newly-elected mayor of Bethlehem will no doubt put up a positive face this season but it will be hard for locals or tourists coming to celebrate the birth of the Prince of Peace not to notice the giant concrete walls that surround the city of Bethlehem
Christmas is a happy and joyous time for all. But the promises by the angels 2000 years ago for peace on earth are still falling on deaf ears as political powers are unable to find a political solution that can produce an end to the four-decade-old Israeli occupation.