With the visit of Pope Francis to Cairo on April 28-29, ties between the Vatican and Al-Azhar have been strengthened, putting interfaith dialogue high on the agenda of the Christian and Muslim representatives. 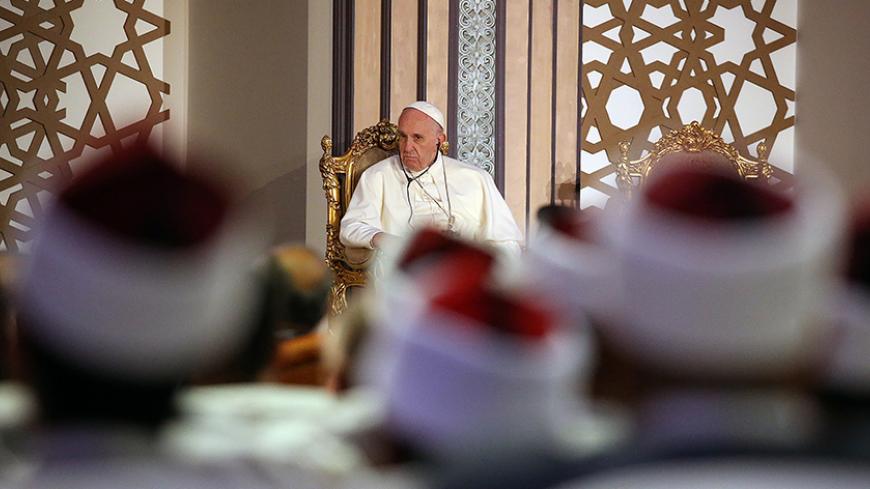 CAIRO – With the 26-hour historic visit of Pope Francis to Cairo on April 28-29, Al-Azhar and the Vatican have restored momentum to Christian-Muslim dialogue. At the end of the visit, Grand Imam Sheikh Ahmed al-Tayeb and the head of the Roman Catholic Church exchanged a warm embrace.

"Together let us affirm the incompatibility of violence and faith, belief and hatred," said the pope, commenting on the photo of the embrace he posted on his Instagram account.

At the start of his two-day trip to Egypt, at the International Peace Conference held at Al-Azhar Conference Center in Cairo, Francis said, "Precisely in the field of dialogue — particularly interreligious dialogue — we are constantly called to walk together, in the conviction that the future also depends on the encounter of religions and cultures."

The words of Francis reflected the Vatican's keenness to promote dialogue between Islam and Christianity through the institutions of Al-Azhar and the Vatican, and find mechanisms to pass on the culture of dialogue to the new generations in schools and universities as well as at the popular level.

The pope's visit to Cairo to attend the International Peace Conference organized by Al-Azhar came a year after the visit of Tayeb to the Vatican in May 2016, in which he announced the resumption of dialogue between Al-Azhar and the Vatican and the formation of joint committees to manage the dialogue focusing on the values ​​of peace and coexistence and on confronting extremist ideas and terrorism.

In January 2011, relations between Al-Azhar and the Vatican were severed against the backdrop of the remarks made by Pope Benedict XVI on Islam and Muslims, which were interpreted by some in Egypt as accusing Muslims of persecuting adherents of other religions in the Middle East and calling for intervention to protect them.

"The outcomes of the dialogue that started between the Vatican and Al-Azhar cannot be assessed after just one year," Rev. Rafiq Geryish, the head of the press office of the Catholic Church and member of the Vatican-Al-Azhar Dialogue Committee, told Al-Monitor.

"Changing ideologies and starting religious dialogue will take time, but the most important thing is focusing on fast intervention to confront emerging phenomena," he said.

Geryish added, "The objective of the dialogue is to focus on reviewing methods, changing religious discourse and achieving religious ideological openness, especially in poor and marginalized places that may be influenced by radical and extremist ideas."

Coptic Catholic Bishop Emmanuel Ayad of Luxor, the head of the organizing committee for the pope's visit to Egypt, told Al-Monitor, "The restart of the Christian-Muslim dialogue does not mean that things are back to normal, but the visit of Pope Francis is a new breakthrough," asserting that the visit pushed the dialogue forward.

He said, "Now there is a genuine will to hold a sincere dialogue. The most important thing is to spread this culture of dialogue among Christian and Muslim populations." He denied, however, that any direct agreement was reached during the visit on a mechanism to disseminate this culture among citizens, through sermons at mosques or churches.

The speech of Tayeb — who is known as a moderate and centrist — that he delivered in the presence of Francis was mainly political, focusing on cleansing Islam from accusations of extremism.

Tayeb also called for unity under the umbrella of Al-Azhar and the Vatican to deepen "the philosophy of coexistence and reviving the method of dialogue and respect of the creeds of others."

Abdel Ghani Hendy, a rapporteur at the Egyptian Supreme Council for Islamic Affairs, told Al-Monitor, "Al-Azhar, the Vatican and the Orthodox Church are now on the same side. There is no alternative but to accept a dialogue that calls for peace, coexistence, a moderate understanding of monotheistic messages and the criminalization of murder, violence and extremist ideologies."

An intense media campaign has been waged in Egypt during recent months against Al-Azhar, questioning its ability to renew the religious discourse and adopt a moderate approach. The campaign was provoked by remarks made by President Abdel Fattah al-Sisi addressing Tayeb during a celebration on National Police Day in January. "You wear me out!" said Sisi, addressing the grand imam.

These remarks raised doubts about Al-Azhar's ability to successfully hold a solid and efficient dialogue with the ecclesiastical institutions on the values ​​of coexistence and peace.

Commenting on this campaign, Hendy said, "Al-Azhar's methodology is the correct Islamic methodology of moderation and acceptance of the other. Al-Azhar will remain the only platform of centrism and moderation in Islam."

He added, "Al-Azhar can harness all of its potentials for holding a successful dialogue with the Vatican. We have no other solution than reform through dialogue. Prophet Muhammad called for this dialogue when he said, ‘Call to the way of your Lord with wisdom and goodly exhortation.’ We know there is a big conspiracy against Al-Azhar. There are also challenges. We need reform. But ultimately we must admit that Al-Azhar University has a scientific approach that calls for peace and rejects extremism."

The success of interfaith dialogue and positive outcomes of the pope’s visit depend on finding real mechanisms for a joint action by Muslim and Christian religious institutions that reach the Christian and Muslim peoples. This also depends on containing anger and incitement among citizens, stopping misinterpretation of religious texts and changing religious discourse.