Egypt hopes papal trip will be a blessing for tourism industry

The two-day visit of Pope Francis to Egypt on April 28-29 was more than just a religious visit. 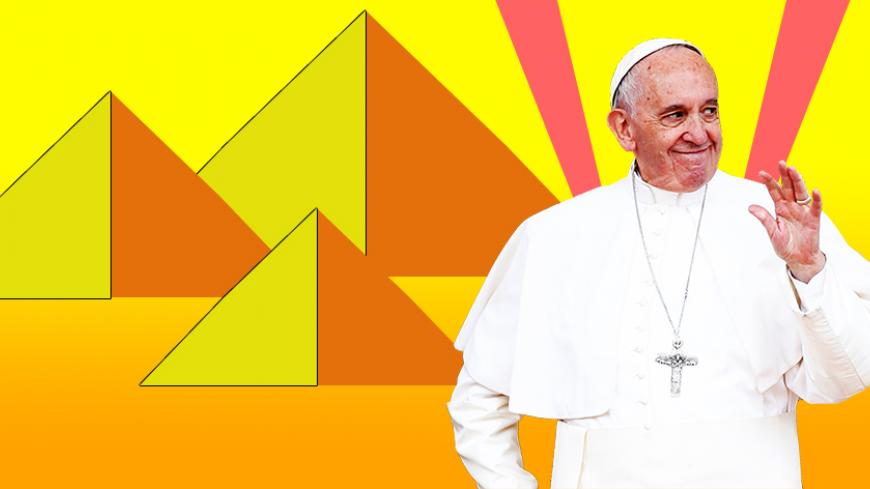 CAIRO — The two-day visit of Pope Francis to Cairo on April 28-29 was valuable for the Egyptian government. Tourism Minister Yehia Rashed told local press April 29 that the pope's visit at this time shows the world the real value of Egypt and would help revive tourism to the country.

“We live under the sun of the one merciful God. … May the sun of a renewed fraternity in the name of God rise in this sun-drenched land, to be the dawn of a civilization of peace and encounter. … In Egypt, not only did the sun of wisdom rise, but also the variegated light of the religions shone in this land,” the pontiff said in his speech at the International Peace Conference held April 28 at Al-Azhar conference center in Cairo.

At his next stop, speaking in front of Sisi, Prime Minister Sherif Ismail, Minister of Defense Sodqi Sobhi, Tayeb and a number of religious figures at a conference in Al-Masah Hotel, Francis described Egypt as “Umm al-Dunya" ("Mother of the World"). He ended his speech saying “Blessed be Egypt my people,” quoting the Bible.

In this context, there were calls in Egypt to take advantage of the pope’s historic visit at this tumultuous time to improve the country’s image worldwide and promote tourism, which is affected by the unstable security situation.

Indeed, the tourism sector in Egypt has declined significantly since 2010 due to political instability, according to a report issued by the World Tourism and Travel Council on March 20, which indicated that the amount of money spent by international tourists fell below 30 billion Egyptian pounds ($1.7 billion) in 2016 compared to 140 billion pounds ($7.2 billion) in 2010.

“All Islamic and Christian religious institutions should invest in this visit to entrench the principles of equal citizenship, spread the culture of peace and work for the happiness of mankind,” said Egyptian Minister of Religious Endowments Mohamed Mokhtar Gomaa, commenting on the visit to the state-run Middle East News Agency on April 28.

He continued, “The ministry will work to build bridges of peace and spread a culture of tolerance with the whole world."

Dina Tadros, a former adviser to the Ministry of Tourism for Coptic heritage, told Al-Monitor by phone, “The pope is seen as the guiding compass of world leaders because of his prestigious standing, and his visit to Egypt will reflect on the tourism sector.”

She added, “The pope of the Vatican improved the image of Egypt before the international community when he talked about our country in the speeches he delivered during his visit. The pontiff cited a verse of the Bible, saying, ‘Blessed be Egypt my people.’ He even spoke in Arabic to say Egypt is ‘Umm al-Dunya’ and described Egypt as the ‘dawn of a civilization of peace and encounter.’”

Explaining how the pope's statement would promote religious tourism to Egypt, she said, “The pope said he is visiting Egypt as a 'pilgrim of peace' — and this will encourage the more than 1 billion Catholics worldwide to visit our country.”

She continued, “The pope rebutted all negative views of security In Egypt, after insisting not to ride an armored vehicle inside the country. This is good publicity for Egypt.”

Tadros said Egypt should benefit from Francis’ visit by forming a committee composed of representatives of the ministries concerned with the tourism sector and tasked with opening channels of communication with churches, identifying key countries that send religious tourists and equipping religious tourist sites in Egypt.

Coptic writer and thinker Gamal Asaad acknowledged the benefits of the pope's visit. He told Al-Monitor, “The pope's visit topped all missions carried out by the Ministry of Tourism to various countries of the world to promote Egypt.”

He said, “The pope has offered Egypt priceless publicity,” pointing to the importance of government action at all levels to invest the results of the visit and take advantage of the role of Al-Azhar and the Coptic Church to embellish the international image of Egypt.

Asaad added, “Pope Francis’ visit was beneficial to Egypt; it laid the foundations on which the government should rely to promote tourism. The visit alone is not enough.”

Journalist Abdallah al-Sanawi said that Francis' visit to Cairo is a pastoral visit for Egyptian Catholics. “Even if the pope talked to Egyptian President Abdel Fattah al-Sisi about Guilio Regeni, the visit was not a political visit but rather a spiritual one for Al-Azhar and the Coptic Church,” he told Al-Monitor.

On Feb. 3, 2016, Egyptian authorities had found the body of Regeni, an Italian graduate student conducting research in Egypt, on the outskirts of Cairo with clear signs of torture nine days after he disappeared on the evening of the fifth anniversary of the January 25 Revolution. The Italian government asked the Egyptian government to conduct an official investigation.

Sanawi said the pope's visit is neither political nor economic, but will positively reflect on Egypt’s general political and economic climate.

“Al-Azhar will benefit the most from this visit. Egyptians saw the importance of Al-Azhar in the photo of the embrace exchanged between Pope Francis and the sheikh of Al-Azhar. This gave momentum to Al-Azhar, which is currently battling a fierce media campaign against it,” he said.

Some Egyptian media outlets are claiming that some of the texts and curricula of Al-Azhar incite violence. On April 9, Egyptian TV presenter Ahmed Moussa said, “Most terrorists are Al-Azhar graduates.”

Asaad concluded that “the government must act at all levels to invest the outcomes of the pope’s visit and benefit from the role of Al-Azhar and the Coptic Church to change the image of Egypt abroad.”