Following Pope Francis’ visit to Egypt and his meetings with Sheikh Ahmed al-Tayeb and Pope Tawadros II, calls for Sunni-Shiite dialogue have been revived. 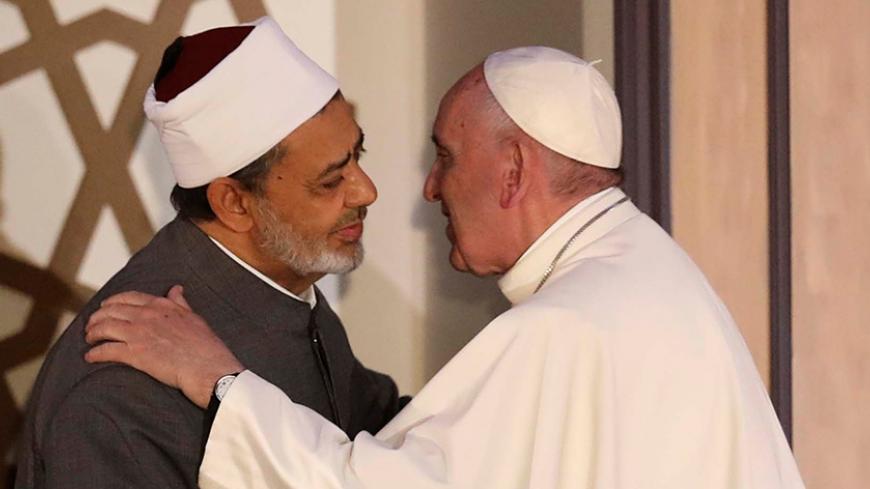 Interreligious dialogue is an idea that is constantly being reinvented, and despite the recent stagnation in Sunni-Shiite dialogue, many observers believe the situation will change with time. Pope Francis’ visit to Egypt on April 28 rekindled hopes that, despite the years of boycott and disputes, the Sunni-Shiite rift will one day come to an end.

Pope Francis reportedly met with Al-Azhar Sheikh Ahmed al-Tayeb in what is considered a remarkable development in Al-Azhar relations with the Vatican. The boycott between the two began in 2011 following Pope Benedict XVI’s calls to the leaders of the world to protect Egypt’s Christians after the bombing of the Coptic Church in Alexandria in January 2011. Al-Azhar considered such remarks as meddling in Egyptian affairs.

Pope Francis also met with Alexandria’s Pope Tawadros II. They signed a mutual agreement April 28 to recognize baptism in both Catholic and Orthodox churches, putting an end to a dispute that has been around for 16 centuries. The agreement eliminated the requirement that a person who had already been baptized in one of the churches would have to repeat the baptism if he switched to another church.

On May 4, DotMsr.com published an article titled “After resumption of dialogue with the Vatican, when will Sunnis and Shiites sit at one dialogue table?”

The article added, “Will Al-Azhar resume talks with Shiites, and will the two sides agree on a purposeful dialogue? When will a restorative dialogue between Sunnis and Shiites happen?”

Pope Francis’ visit caught the interest of some Shiite leaders who might be amenable to a Sunni-Shiite dialogue under Egyptian auspices. Hassan Sharifa, the secretary of Awqaf in the Supreme Islamic Shiite Council in Lebanon, said in an official statement on April 29 that Egypt represents an oasis for communication and cultural exchange. He added, “I wish some politicians would benefit from this significant and bold visit for peace.”

Cardinal Peter Turkson, the prefect of the Dicastery for Promoting Integral Human Development, told the Italian Catholic news agency ZENIT April 28 that Pope Francis’ visit to Egypt is the key to solving extremism and terror in the region. He noted that encouraging dialogue between the two main Islamic sects, Sunnism and Shiism, would contribute to uprooting terrorism.

These calls for Sunni-Shiite dialogue have undergone several phases. In 1947, the Association for Rapprochement Between Islamic Legal Schools was established following calls from the Ministry of Awqaf to end the Muslim sectarian rift. It included 16 religious scholars — nine of whom were Al-Azhar sheikhs. Hassan al-Banna, the founder of the Muslim Brotherhood, and Amin al-Husseini, a Palestinian mufti, represented the Sunni sect, while Mohammad Taqi al-Qummi, Muhammad Hussein Kashif al-Ghita’, Abdul Hussein Sharaf al-Din, Ali Bin Ismail al-Mu’ayid and Mohammad Bin Ali Allah al-Umri represented the Shiite sects, including Zaidism in Yemen. The members met several times, but they could not reach any results to end the rift.

The Association for Rapprochement Between Islamic Legal Schools led the Sunni-Shiite dialogue to its second stage when Mahmud Shaltut was grand imam of Al-Azhar. Shaltut was also a member of the association, and he and Qummi announced an agreement on several issues. Shaltut issued a fatwa that sparked wide controversy in 1959, as he recognized Shiism as a sect and allowed its practices. He decided to teach Shiism in Al-Azhar, but when Gad al-Haq Ali Gad al-Haq rose to prominence as Al-Azhar grand imam in 1982, he halted these teachings and froze all Sunni-Shiite rapprochement attempts.

When Muhammad Sayyid Tantawy became grand imam of Al-Azhar in 1996, he renewed calls for dialogue between Sunnis and Shiites and described the dispute between them as trivial rather than touching on Islam’s pillars. But the dialogue was restricted to some meetings with sheikhs and religious researchers from Iran’s Shiites. For his part, Tayeb called for Sunni-Shiite dialogue in an official statement in July 2015 and reiterated his calls in a press statement in July 2016, but in vain.

Al-Azhar preacher Ahmad al-Bahi told Al-Monitor, “We are in desperate need of a Sunni-Shiite dialogue to ward off extremism in both sects. Countries against the region use extremists as pawns in political conflicts that have nothing to do with religious disputes. Just like Iran uses Shiites in Saudi Arabia, Turkey uses Sunni groups in Iraq and Syria.”

A member of the Salafist Dawa Board in Beni Suef governorate told Al-Monitor on condition of anonymity, “Calls for Sunni-Shiite dialogue are traps. Iran wants to spread Shiism in the Arab nation and the Middle East through these calls to increase its base of followers, as it can use them to destabilize its opponents like Saudi Arabia. If there was an open Sunni-Shiite dialogue and Shiism spread in Egypt, the country would not be safe from Shiites’ schemes.”

Mahmoud Faraj, the former head of Egypt’s Interests Section Office in Iran, told Al-Monitor, “The sectarian rapprochement has nothing to do with politics. Sects must draw closer to each other to show extremists that they are tolerant and capable of dialogue. … Egypt is in no danger if Sunnis and Shiites become closer because many organizations threatening Egypt, like the Islamic State and the Muslim Brotherhood, are affiliated with Sunnis. Extremism, whether Sunni, Shiite or non-Muslim, threatens Egypt.”

“I wouldn’t rule out the possibility that many religious institutions in countries where there is a Sunni-Shiite conflict are facing pressure from political regimes that fuel the conflict to achieve political gains and stir strife. But the free will of some institutions, like Al-Azhar, can lead to a dialogue. However, I expect the extremist organizations that are politically run to object to such dialogue.”

Al-Azhar has repeatedly called for Sunni-Shiite dialogue, and many scholars differentiate between using the sectarian dispute as a pressure card within the political conflict between the Arab states and Iran. Still, it seems impossible to reap fruits that please all sects, amid objectors to the idea like the Salafist Dawa (Sunni side) and some Shiite circles.