The Odunpazari Modern Museum aims to develop the cultural offer in the Anatolian town of Eskisehir. 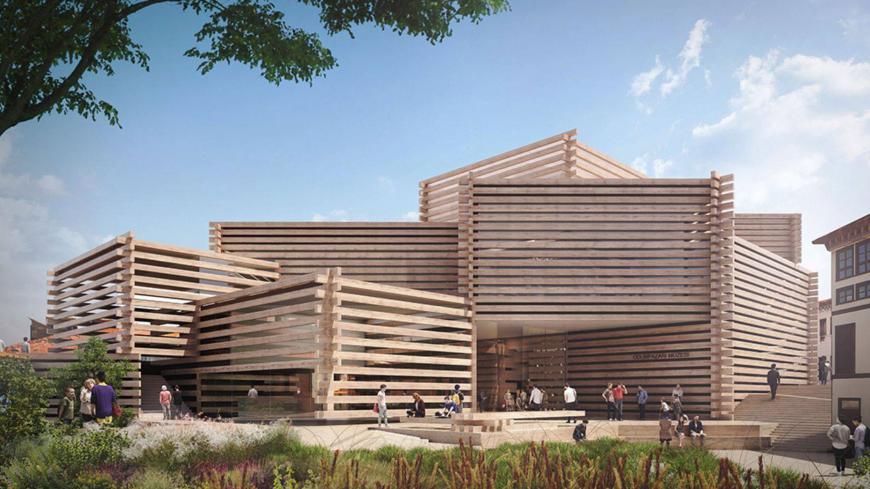 A digital rendering of the Odunpazari Modern Museum, seen in a picture uploaded July 17, 2017. - Facebook/aasarchitecture

“The Odunpazari Modern Museum in Eskisehir will be like the Guggenheim Museum in Bilbao." This is the hope and goal of the architect Erol Tabanca, chairman of the construction group Polimeks, who became an avid — and eclectic — art collector in the 1990s.

Tabanca used to show his private collection — of more than 600 works that ranges from paintings to video art — to friends and visitors at his house and office. The collection is eclectic, with examples of  the main currents of Turkish art from the 1950s to the 21st century. “When it became too large, instead of looking for bigger rooms or storage space I decided to build a museum," he told Al-Monitor. The Odunpazari Modern Museum opens to the public Sept. 8.

It stands in Odunpazari, a traditional Ottoman neighborhood with timber houses dating from the 19th century on a slope in Eskisehir, a large town in Anatolia midway between Istanbul and Ankara. It is already famous in Turkey for its universities, museums and cultural projects. This is where Tabanca was born and raised.

The Odunpazari Historical Urban Site has been on UNESCO's World Heritage Tentative List since 2012. The universal value of its candidature is focused mainly on two assets. The first is the preservation of the social and cultural texture of the urban environment. Some of the residential family houses, or konaks, have been restored, painted in dashing colors and reused as cafes or cultural spaces.

The second is the carefully preserved Kursunlu mosque complex — home to Sufi monks of the past — that after almost five centuries still serves as a training center for traditional handicrafts such as miniatures, calligraphy, marbling and glassblowing. The area around the mosque is more like an open air art museum, or an urban workshop.

However, the museum is not only an addition to the existing cultural offer. “It's a game changer," Tabanca said. “Just like Bilbao, the town will become famous worldwide thanks to its museum, and especially due to the architecture and the museum's architect more than for its collections.”

Tabanca chose the Japanese architecture firm of Kengo Kuma, who is known for his use of natural materials, to design and build the Odunpazari Modern Museum. Yuki Ikeguchi, the architect in charge of the project, told Al-Monitor about the references in the new museum to the building style and the urbanistic pattern of the area.

The external surface is covered in timber beams exactly like Odunpazari's konaks; the building as a whole looks like an assemblage of wooden boxes. More important still, Ikeguchi said, “just outside of the museum there is a small square that gives access to other museums around the Odunpazari, which can also be used as an open area for gatherings by the people of the neighborhood."

The local municipality has been involved in the project by providing the plot of land on which the museum was built.

The museum consists of nine galleries of different shapes and sizes on four levels, in addition to a terrace for large sculptures. Visitors follow the twists and rotations in the structure, along invisible paths, to view the exhibitions and installations. The centrally located built-in square tower distributes light to the different floors at various angles and intensities according to the time of day.

The museum is managed by a foundation chaired by Tabanca's daughter, Creative Director Idil Tabanca, who is a trained photographer and digital media artist.

The Odunpazari Modern Museum is also a cultural platform, with a mission to provide opportunities and spaces to young artists, both Turkish and international, involved in specific projects, especially those working in visual arts such as photography and virtual reality. They will be hosted in the Odunpazari Inn, a small boutique hotel next to the museum located in three renovated traditional konaks, which consist of 12 spacious rooms and suites. The timber structure of the konaks perfectly complement the museum building.

The hotel has an additional cultural mission — that of eno-gastronomy. Its chef, Sara Tabrizi of Aheste restaurant in Istanbul, has divided a large space into degustation corners in which she offers samples of her creative cuisine: mezes or hors d'ouvres, street food, kahvalti or breakfast/brunch, grill, Turkish pizzas and ice cream.

Tabrizi offers modern and almost artistic interpretations with organic and locally grown ingredients used in traditional recipes; wines and beers are among the most innovative Turkish artisanal brands.

The first big artistic event at the museum, after what is expected to be a lavish opening party on Sept. 7, is the inaugural exhibition “Vuslat" ("The Union"). Since the museum doesn't have a staff of permanent curators, it was curated by Haldun Dostoglu of Galeri Nev in Istanbul.

The exhibition presents a selection of around 200 works from Tabanca's collection. "Eskisehir embraces its museum, the collector realizes his dream and the works of art meet the visitors," Dostoglu told Al-Monitor. Paintings, sculptures, collages, videos, works made of surprising raw materials such as clothing labels or stitched fabrics are distributed on every floor and gallery, saturating all the walls and corners of the museum.

The end result is pleasant; even without a coherent chronological or thematic narrative there is no confusion or redundancy. Works by famous Turkish and international artists — including Ahmet Elhan, Ansen, Assa Kauppi, Burcu Percin, Canan Tolon, Daron Mourdian, Sabire Susuz, Taner Ceylan and Tayfun Erdogmus — stand out as masterpieces, but they are perfectly blended in the refined architecture and the fizzy atmosphere of the Odunpazari Modern Museum. An opening in style.