Eskisehir combines restored Ottoman-era homes with new and hip museums, bars and galleries, attracting people from all over Turkey. 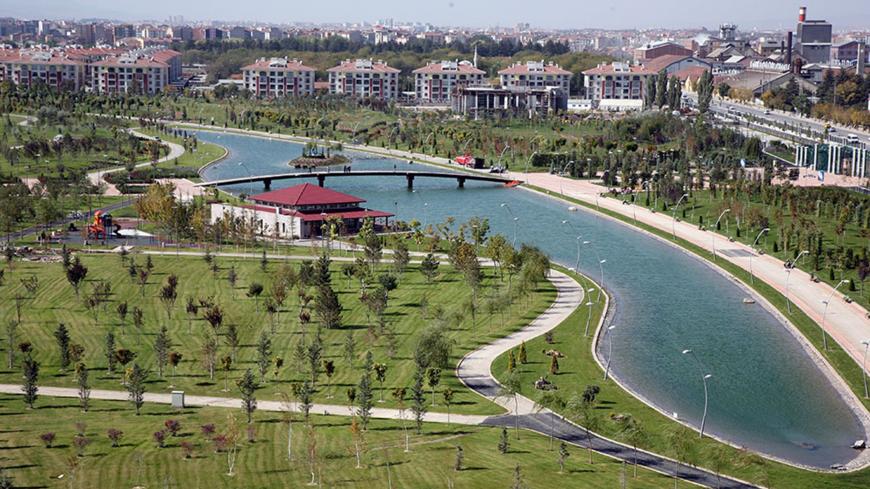 A view of the small Central Anatolian city of Eskisehir, Turkey. - Eskisehir Municipality

Bolstered by an international urban honor and the recent opening of an ambitious, visually imposing modern art museum, the spotlight has turned on Eskisehir, a small Central Anatolian city that has slowly but surely become one of the most livable and likable in the country.

Late last year, Eskisehir, whose name means the old city, was chosen as one of the five finalists for the WRI Ross Prize For Cities thanks to a sweeping urban transformation effort led by Mayor Yilmaz Buyukersen, a former professor and administrator who has been in office for 20 years.

Last month, the Odunpazari Modern Museum opened its doors with great fanfare in the city's historic quarter of Odunpazari, a significant addition of cultural wealth that the owners hope will have a similar effect on Eskisehir as the opening of the Guggenheim Museum had on the Basque city of Bilbao. Designed by Japanese architecture firm Kengo Kuma & Associates, the complex combines geometric wizardry with bold, severe beams of timber that form the basis of its structure.

Odunpazari, with its array of restored, brightly painted Ottoman-era homes, in recent years has become popular with locals and tourists from around Turkey. A wax museum — named after Buyukersen — is wildly popular and often has lines out the door and around the block, and there are many cafes and souvenir shops; the Odunpazari Modern Museum endows the tourist area with some intellectual clout.

Just outside the heart of historic Odunpazari, the Hamamyolu Urban Deck leads pedestrians toward the vibrant city center, which is expansive yet walkable. The Porsuk River, once associated with chronic pollution before Buyukersen took action, is straddled by a long stretch of bars and restaurants, and the gondola-esque boats that paddle passengers around the river has even led the city to be affectionately dubbed "Venice of Turkey."

“There was only one center in Eskisehir. Everyone went to the same places so you knew that you would run into your friends there. There were very few bars and everyone would either drink outside or near the Porsuk River,” said Merve Zamangil, a digital media planner and sales manager based in Athens, of her high school years in the early to mid-2000s. Zamangil grew up in Eskisehir and still visits her family there regularly.

“Nowadays the city center has grown so much, and there is a much bigger selection of venues. The city center has slowly spread toward the university, and this is what has surprised me the most and what I feel to be the biggest change,” Zamangil told Al-Monitor.

Unlike most other cities in conservative Central Anatolia, the booze flows freely in Eskisehir, and one street downtown is packed with rows of bars and taverns, mostly catering to a younger crowd. But there are also pubs popular with the older crowd, such as the Drunken Duck, which is, despite its name, a quaint and quieter pub.

While noting that the addition of parks, improvements alongside the Porsuk River, the opening of the Odunpazari Modern Museum and the revitalization of Odunpazari were all positive developments that have made the city more cosmopolitan, Zamangil said that the negative side of Eskisehir's development includes excessive and aesthetically unappealing concretization.

“There are shopping malls in the heart of the city and in my opinion they are very ugly. They should have been built outside of the city,” Zamangil said.

Earlier this year, Esra Eldem opened the Eldem Art Space gallery with her family in an elegant historic Odunpazari building painted in a pleasant blue hue. Eldem was amazed at how much the city had changed upon moving back after years living elsewhere.

“Returning to Eskisehir after 15 years living in other cities and witnessing the city's transformation was unbelievable. Coming from a bigger city to a smaller city one thinks that they will encounter a more conservative atmosphere. As a woman, what I felt was the opposite,” Eldem told Al-Monitor, adding that she felt safe in the city and that methods of self-protection she had devised over the years in other cities like Istanbul she no longer felt she needed in Eskisehir.

While Eldem said it was clear that there had been a major effort regarding urban planning, also mentioning improvements to the riverside and initiatives to increase bicycle use, she noted that the tramway system was still insufficient as it does not reach most people in Eskisehir, and that the development in some of the city's newer neighborhoods was happening rapidly and with problematic planning.

Access to the city from Istanbul, however, has never been easier. A high-speed train takes three hours, and while the line is not new, an Istanbul suburban train whose route was undergoing renovation for years finally reopened in March, connecting the high speed lines from six different stations across the city. Previously, trains heading east out of Istanbul only left from the suburb of Pendik, located deep on the Anatolian side of the city more than an hour away from central Istanbul. A train from the capital of Ankara takes just an hour and a half.

Though not exactly known as a culinary destination, Eskisehir nevertheless boasts a number of mouthwatering regional specialties, including cigborek, a deep-fried yet buoyant pastry filled with meat or cheese; balaban kebab, the city's answer to Bursa's legendary Iskender (doner with yoghurt), which is just as good as the famous dish; and bukme, a dense savory pastry stuffed with lentils or cheese and covered with poppy seeds. The local version of manti is usually made with lentils rather than small morsels of meat, but it is gloriously buttery and supremely delicious.

Eskisehir is a college town, and the public Anadolu and Osmangazi universities collectively enroll about 60,000 students, which has resulted in the city harboring a youthful energy that surged with its development.

And while there has been much talk about Istanbullites leaving Turkey's largest city for the coastal city of Izmir and its provincial towns, Eskisehir is likely to also become an alternative destination. Eldem said that she has met many young people and families moving to Eskisehir from Istanbul, both those originally from the city and people from elsewhere.