A British charity helped build a skate park in the West Bank village of Jayyous, where Palestinian boys and girls can find an escape from their situation through skateboarding. 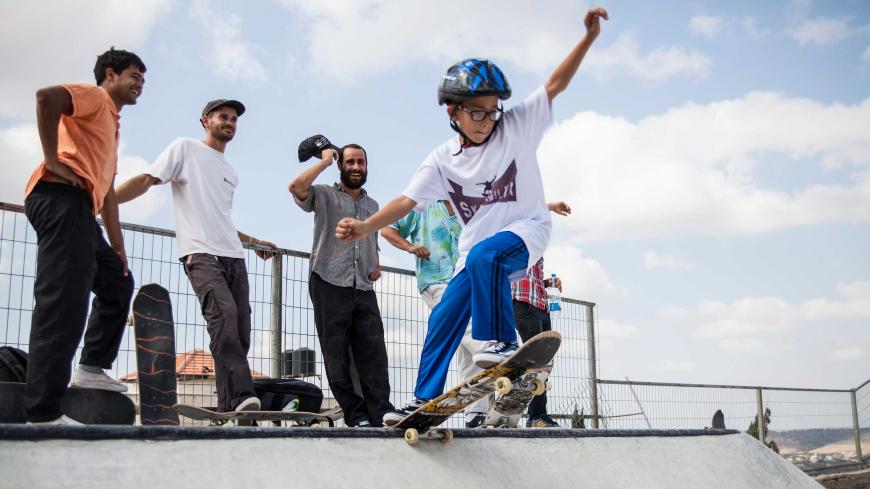 A young boy from Qalqilya has already mastered how to drop in, as international volunteers overlook the opening of Jayyous’ new skate park, West Bank, Oct. 21, 2017. - Tessa Fox

Where a playground once stood in disrepair, between the municipality and the school of a small village in Palestine, a free access community skate park now stands. The majority of the children of Jayyous, a village in the northwest of the West Bank, are rolling around their new play space, while others celebrate on a terrace overlooking the park, singing and dancing to a local party song.

“Skateboarding is amazing. I feel like a bird when I’m skating,” Yasmeen Foqha, 15, told Al-Monitor, between laps around the park.

The 650-square-meter (7,000-square-foot) skate park was constructed in September by the British charity SkatePal with a team of international volunteers, alongside local partner SkateQilya. SkatePal has been operating within Palestine since 2013 to promote the benefits of skateboarding in a region where cultural, educational and sporting opportunities are limited. Their last project was a 700-square-meter skate park in the village of Asira al-Shamaliya, just north of the West Bank city of Nablus. SkateQilya is a youth empowerment program based in Qalqilya, west of Jayyous and bordering the Israeli wall. Through their summer camps, they use skateboarding to teach leadership skills and community building to young people in the West Bank. The organization is primarily funded through the American nonprofit Playgrounds for Palestine as well as individual donors.

According to the Palestinian Central Bureau of Statistics, Jayyous is home to just under 4,000 people with half of the population under 25. The village is in close proximity to the Israeli-West Bank wall and directly affected by frequent raids by the Israel Defense Forces (IDF). Only one hour into the opening of the park, word spread that the IDF was in the village. A group of children started running toward the center of town to see where the soldiers were, while other park visitors and skaters stayed within the safety of the park.

SkateQilya Director Mohammad Othman’s main aim of the park in Jayyous is to keep the children out of trouble with the Israeli soldiers. “The most important thing is us protecting the children from being arrested, harassed or humiliated by the Israeli army,” Othman told Al-Monitor.

With no public park for the children to play previously, they would hang out after school hours in the streets or go to the wall to throw rocks at it. “From September to the end of October, we had about 25 kids arrested [for this reason],” Othman added.

Abdel Jaber, 14, has only been skating since the park construction finished. “It makes me happy. It’s fun, a good hobby and sport. Before I never really had something to pass my time,” Jaber told Al-Monitor.

SkatePal founder and executive director Charlie Davis views skateboarding as a good release for the children in Palestine, especially those in Jayyous who are clearly stressed by their living situation. “Skateboarding can be quite an aggressive sport, depending on how you want to do it, but also creative. So I think that’s a perfect outlet for people who want to direct their stress through something,” Davis told Al-Monitor.

The majority of the children at the opening appeared desensitized to the IDF arriving during an event of importance to them. Jaber stated how normal it was. “I don’t know why they would want to enter here, it’s a play area,” he said. The soldiers stated they were trying to find the child who threw stones at the wall and was now hiding behind the skate park.

SkatePal volunteer Zak Saleh returned to Palestine from England to help build the Jayyous skate park after assisting SkatePal in Asira al-Shamaliya two years ago. He believes “skateboarding opens up a whole new word” for the children. “They’re so locked into the country here. Due to the occupation, it’s difficult for them to travel around. With skateboarding, it allows you to look at your surroundings differently. For example, maybe there is a slight incline in the concrete and it becomes a whole new spot that you could enjoy,” Saleh told Al-Monitor.

Skateboarding is also a sport where barriers of gender, age, and religion are broken down. Othman was originally concerned the community in Jayyous would comment on the mixing of boys and girls together, as in more conservative Palestinian towns there is traditionally a gender divide. “In reality, I would say we have about 90% support. Everyone is happy there will be a place for children to release their energy and learn something new,” Othman said.

Foqha understands how strange it is for her to skate in her hometown Tulkarm, just north of Jayyous. “In Jayyous [at the skate park] it feels normal, but in Tulkarm, I can’t skate in the street because people look at me like, ‘What are you doing?’” Foqha said. “They don’t look at boys like this. Boys can do anything in our community, but girls no.”

Foqha finds it inspiring that boys and girls can skate together. “The boys have more courage and when we see this, we take that from them. As a girl, we are sometimes afraid of many things, but the boys aren’t afraid of anything,” she said.

Having equality between boys and girls is important for SkatePal, so they ensure both female and male volunteers stay in the communities and teach skateboarding to the children. “When you see women in their 30s and they still skate, they’re independent, they have jobs and they aren’t married or have kids, it shows it’s a possible thing to do. [People in Palestine] see this is something else that works,” Davis noted.

SkatePal director Theo Krish sees the possibilities that can emanate from the projects SkatePal and SkateQilya create and run in Palestine, such as skateboarding lessons and camps, providing future and more long-term opportunities for the youth. “There are possibilities for them to take on roles within the organizations,” Krish told Al-Monitor.

“My ultimate aim when I started SkatePal was to have a self-sufficient team, which doesn’t rely on foreigners. That’s what a skate scene should be about,” Davis noted.

“Beyond that you’re looking at skateboarding in Palestine getting to a stage that a skate shop can exist and someone needs to run that, or run the first board company or magazine in the country,” Krish added.

Foqha concluded that her continued dedication to skateboarding is her resistance to the occupation. “Anything that we succeed in, it helps us toward our freedom. Because of this, we try to succeed in everything,” she said.