Gazan girls are encouraged to practice roller-skating and skateboarding at skate parks in the Gaza Strip, despite the lack of equipment and societal disapproval. 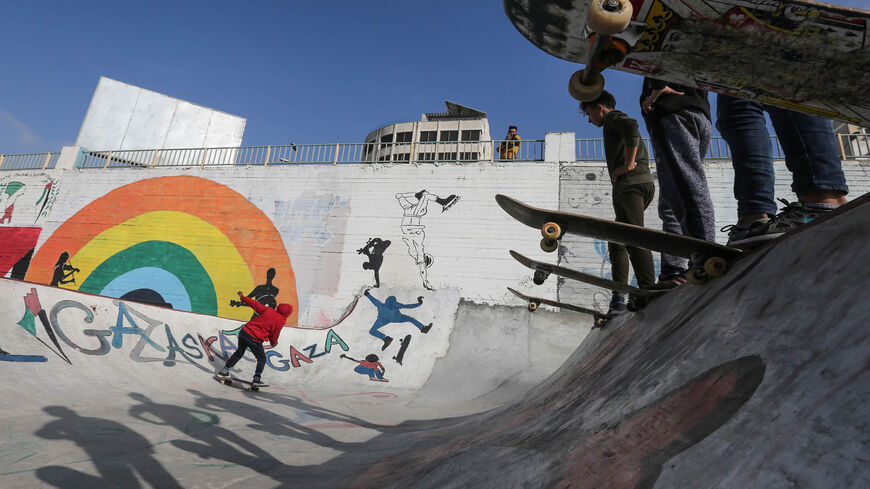 Near the port of Gaza City, girls practice roller-skating and skateboarding at a skate park decorated with graffiti, in the hope of a promising future in the sport and to challenge the general belief that this sport is for boys only.

Rajab al-Rifi, the 25-year-old coach of the Gaza skate team, told Al-Monitor that skating is not well known as a sport in the Gaza Strip. "It was initially only popular among older youth, as it requires focus and a lot of practice," he said, adding, "The idea of setting up a team of girl skaters came up in 2019. The team consists of 12 girls, aged 3-12. [The idea] has been a qualitative leap that stopped this sport from being limited to boys in Gaza.”

Rifi said girl skaters are being trained every Friday for an hour or two in the morning, when there are few people around, to "preserve their privacy." They learn skills and rules for roller-skating and skateboarding, which helps prevent injuries and at the same time boosts their confidence.

Rifi noted, “Social customs and traditions prevent many girls from practicing this sport, especially when their families do not encourage them to practice. Many girl skaters find it difficult to obtain roller skates, which are not available in the Gaza Strip, except in the stores that sell used stuff or those imported from Israel.”

He added, “Skating strengthens the muscles, stimulates blood circulation and improves the skaters’ mood and morale. It also helps them lose weight.”

Rifi said there has been no government interest or support for this sport. According to him, skaters practiced for years on main streets and roads, "which posed a threat to their lives." Finally a group of skaters — with the help of the Italian Center for Cultural Exchange — were able to open two skate parks: one in the northern part of Gaza and another near the Gaza port.

He said, “I hope an indoor skate park for girls [will be realized], which will help them practice freely and privately, and encourage many other girls to join. This would help this sport for girls to survive in Gaza, particularly since people of different ages and of both sexes come to the same skate park.”

A 40-member Italian delegation from the Italian Center for Cultural Exchange mastering various sports, including skateboarding, skiing, circus acts and martial arts, visited the Gaza Strip on Jan. 6, 2020, mainly to bring joy to the children of Palestine, and to show solidarity with the besieged citizens.

Marah Hassouneh­­, 20, told Al-Monitor that she started practicing in 2019, on the roads and in parks, as well as in a park near the Gaza port, despite social conservative traditions that do not allow girls to practice a sport that is considered limited to boys.

Hassouneh, who wears the hijab and lives in al-Shati refugee camp, said that her family rejected the idea at first because she could get injured, bruised or break a limb before her parents agreed that she could join the Gaza skate team to get the needed training and skills.

While practicing, she often notices people's surprise and hears their criticism of being a veiled girl and practicing this dangerous sport.

Hassouneh hopes that this sport gets more attention and that the way society perceives skaters changes. In addition, she said there is a need for new skate parks to open in Gaza in order to develop this sport further and allow athletes to take part in Arab and international competitions.

Kinda Farwana, 9, told Al-Monitor that she has been practicing since 2019 and watches YouTube videos on roller-skating and skateboarding to learn the moves and new skills. She said that regular training is needed in order for the skater to become a professional, in addition to designated places to practice with the right equipment.