Some businessmen and heritage institutions have taken it upon themselves to restore the ancient homes of the Gaza Strip, some dating back hundreds of years, amid limited government funding and external support to preserve Gaza’s heritage. 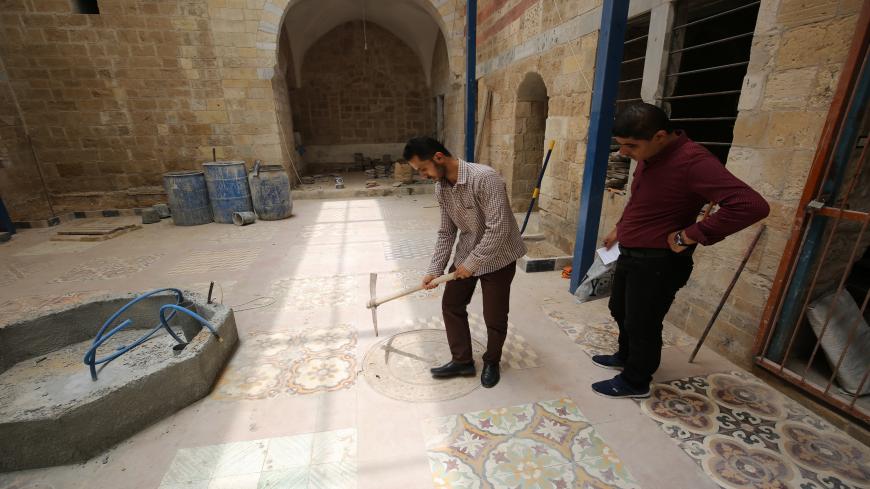 Archaeology and restoration expert Suleiman Hashem opens the cover of one of the ancient wells that was discovered in the house that is being restored in the center of Old Gaza City, Gaza Strip, June 22, 2020. - Ahmad Abu Amer

GAZA CITY, Gaza Strip — Gaza City is home to dozens of ancient houses, some dating back hundreds of years. But these frail houses are collapsing due to natural factors and lack of official care. In a bid to salvage the heritage of Gaza City and its archaeological houses, Palestinian businessman Jawdat al-Khudari decided in early June to buy some of them. He proceeded to execute restoration works to bring them back to life.

Khudari, who in recent years managed to restore four out of five ancient houses he acquired in central Gaza City, told Al-Monitor that restoration works require a great deal of efforts, months of continuous work and a lot of money. He noted that the restoration processes have shed light on the historical periods and civilizations in Gaza City.

Preserving Gaza’s heritage is not limited to governmental or heritage institutions. Khudari described it as a collective effort by anyone who can help, especially since only few ancient homes remain standing.

Al-Monitor toured the area known as Old Gaza in central Gaza City, where the ancient homes are located. Many of those houses have been destroyed by bulldozers over the years. Some were replaced with modern residential buildings and commercial stores. Only a few abandoned ancient homes have withstood demolition.

Archaeology and restoration expert Suleiman Hashem is overseeing the restoration of an ancient house with an area of ​​more than 325 square meters (3,500 square feet). He told Al-Monitor that the house dates back to the Byzantine era but bears the marks of other historical periods, such as the Mamluk, Ottoman and British eras.

Five skilled restoration workers trained by French experts who are currently in the Gaza Strip are helping Hashem on his mission. He was able to restore more than 70% of the house during several months. Just like Khudari, he also stressed the need for funds, not to mention building materials. “Some materials that are used in the process are brought from ancient homes that either collapsed or were destroyed by their owners.”

Hashem, who participated in the restoration of many ancient houses in Gaza City, noted that restoring one house takes between six months and two years. “There are more than 100 houses and archaeological structures dating back thousands or hundreds of years in the Gaza Strip,” he said. “They all need restoration and continuous maintenance.”

The lack of governmental and foreign funding is one of the most prominent obstacles to preserving the heritage of Gaza. This prompted some institutions and businessmen to buy and restore ancient structures to exploit them in cultural projects such as schools or libraries for children, or as commercial establishments such as restaurants that are very popular among the residents of the enclave.

The director of the General Department of Antiquities at the Ministry of Tourism and Antiquities in Gaza, Jamal Abu Raida, praised the individual efforts made by businessmen as well as the government efforts in cooperation with some heritage preservation institutions. He told Al-Monitor, however, that these efforts remain modest given the number of houses and archaeological structures in need of restoration and maintenance.

He pointed out that the ministry lacks the funds to finance the restoration of old houses or archaeological sites in the Gaza Strip, adding, “UNESCO is the only external party that provides financial support for such restoration works. But its support remains meager and disbursed over intervals.”

Abu Raida noted that the ministry has been seeking during the past months to secure funding from Arab and international bodies, such as the Turkish Cooperation and Coordination Agency (TIKA), for the restoration of houses dating back to the Ottoman era. Its efforts remain unfruitful.

Clarifying the ministry’s position on the demolition of some ancient houses by some investors, he said, “There have been many demolitions in recent years. Most recently, at the beginning of this year, an investor demolished two ancient houses to construct two big residential buildings. We are prosecuting him in court.”

Article 17 of Law No. 11 of 2018 on Tangible Cultural Heritage in Palestine prohibits the destruction or tampering of archaeological sites. Under Article 64 of the law, whoever destroys a proven heritage in whole or in part without obtaining written permission from the Ministry of Tourism and Antiquities shall be sanctioned with imprisonment for a period of no less than five years and a fine of no less than 10,000 Jordanian dinars (about $14,100) and no more than 30,000 Jordanian dinars ($42,300) or its equivalent in a legally circulating currency, or with one of these two penalties,

Mahmoud al-Balawi, the official in charge of projects aimed at preserving cultural heritage at the Iwan Center for Cultural Heritage at the Islamic University in Gaza, told Al-Monitor that in the coming days restoration works will start on an ancient house in al-Daraj neighborhood, in eastern Gaza City, after funding was secured. The house dates back more than 120 years.

He explained that the center has been preserving the heritage of Gaza City in three phases over the past 15 years: It handled cleaning works and removal of debris and rubble from 65 ancient houses, partially restored 35 houses and completely restored seven houses.

Balawi said that the lack of funding and absence of relevant legislation represents the greatest challenge in preserving Gaza's heritage. “The cost of repairing a single house does not exceed $60,000, which is a small amount to pay for preserving heritage. This has encouraged some businessmen to buy and restore some ancient houses for residential or commercial purposes.”

Individual initiatives seem to have succeeded in bringing back to life some of the ancient houses in Gaza. But the biggest challenge remains to restore abandoned houses that may crumble at any time due to natural factors if not maintained or that are ransacked by thieves and antiquities dealers.