The Iwan Center for Cultural Heritage at the Islamic University has started a project to restore the 700-year-old Zawiya Al-Ahmadiyya in Gaza’s Old City, one of the few remaining buildings belonging to Sufism and dating back to the Mamluk era. 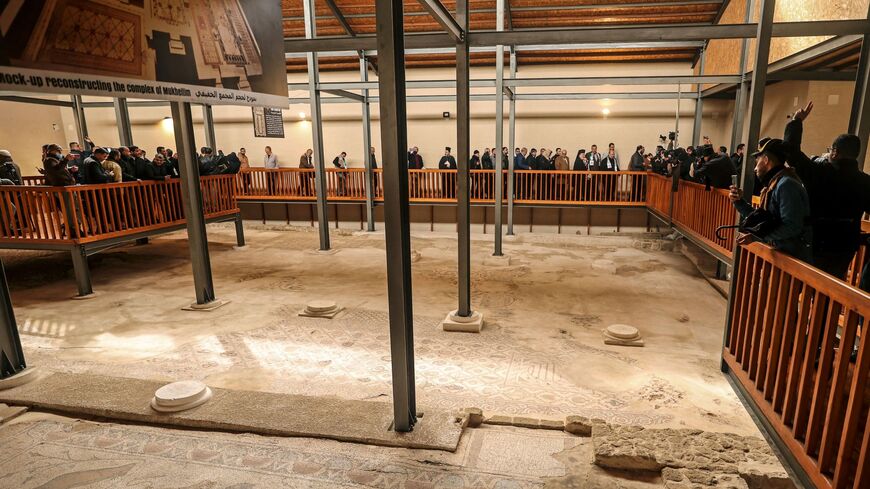 People attend the inauguration of Mukheitim archaeological site, which houses the remnants of a Byzantine church, in Jabalia in the northern Gaza Strip on Jan. 24, 2022. - MAHMUD HAMS/AFP via Getty Images

Many historical sources report that the Mamluk governor of Gaza, Tarantai Al-Jokandar, in cooperation with Badawi’s followers, built the Zawiya Al-Ahmadiyya east of Gaza City in 1336. But the site suffered serious damages and cracks in the walls and ceiling over the years. The restoration operations carried out by non-specialists have sometimes made the situation worse.

The Iwan Center for Cultural Heritage at the Faculty of Engineering at the Islamic University announced in May that it received a grant from the British Barakat Trust fund to restore the site. A team of specialists affiliated with the center started work on June 19.

The official in charge of the project, Mahmoud al-Balawi, told Al-Monitor that the building is severely damaged. “We reached out to several institutions and donors to secure the necessary funding to restore and save the zawiya from collapse, especially since it is the last Mamluk zawiya in the Gaza strip.”

The project is divided into three stages, he said. First, they will train 100 students from the Islamic University on the restoration of archaeological buildings and mapping works. Next, the trained students will carry out the restoration process. The third stage, he said, "consists of documenting Zawiya Al-Ahmadiyya and its history, a task assumed by the Islamic University of Gaza's Oral History Center.”

Balawi expected the restoration project to last for five months. Most of the materials are available in the Gaza Strip and are brought from collapsed archaeological sites, such as large stones and soil.

The site consists of two main sections: the first for prayer and performance of Sufi rituals, and the second for residence. A large water fountain lies in the middle of the premises with an underground vault for storing food.

Jamal Abu Rida, director of antiquities at the Ministry of Tourism and Antiquities in the Gaza Strip, told Al-Monitor that the Zawiya Al-Ahmadiyyah is one of the few remaining buildings in Gaza from the Mamluk era. The ministry is coordinating with the Iwan Center on the project.

“The Gaza Strip includes 280 archaeological facilities ranging from zawiyas, public bathrooms, houses, mosques, churches, and others, but many of these facilities are threatened due to poor external funding,” Abu Rida lamented.

The Palestinian Abu Shahla family has been caring for the Zawiya al-Ahmadiyyah since the Ottoman Empire ruled Palestine. Ahmad Abu Shahla, 70, told Al-Monitor that the family has Ottoman papers that authorize them to take care of the zawiya.

Every Thursday, the family cleans the zawiya and prepares it for Quranic readings and meditation sessions. “Dozens of residents of the neighborhood where the Zawiya is located and some Sufi members participate in these rituals,” he said.

Abu Shahla expressed his happiness at the start of the restoration project, which comes less than a month after the Iwan Center for Cultural Heritage finished restoring the only remaining hammam (Arabic term for public bath) in the Gaza Strip, the Hammam al-Samra, in the Old City of Gaza, which is more than 800 years old.

Sufi orders in the Palestinian territories have always been supported by official authorities. In 1996, the Supreme Council of Sufi Orders was established with the support of late Palestinian President Yasser Arafat. It includes representatives of 16 Sufi sects in the West Bank and Gaza Strip.

However, a number of Sufism followers accuse the Hamas movement of oppressing them and closing many of the zawiyas, claiming that they are contrary to the teachings of Islam.