The Ministry of Tourism and Antiquities in the Gaza Strip issued a first-of-its-kind archaeological guide providing a detailed explanation of all the 39 archaeological sites and buildings found across the coastal enclave. 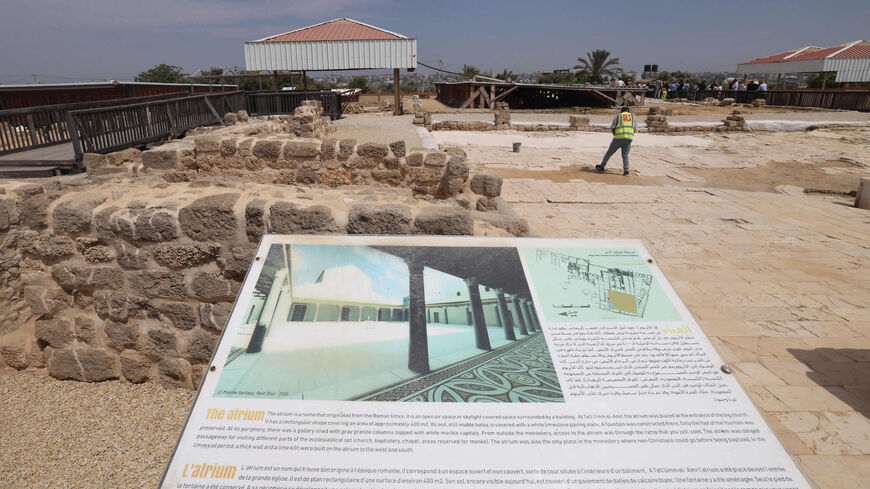 A general view shows the remains of an atrium at the archaeological site of Saint Hilarion Monastery, also known as Tell Umm Amer, in the central Gaza Strip, May 11, 2022. - Mohammed Abed/AFP via Getty Images

GAZA CITY, Gaza Strip — Along with a team of researchers and editors, Gazan history and archaeology researcher Hiyam al-Bitar worked long hours to compile an archaeological guide that she published under the title “Gaza, the Gateway to the Levant.”

In an interview with Al-Monitor, Bitar said that it took her six months to prepare the scientific material for the illustrated guide. She paused, laughed and said that it also took her about six pens to handwrite the material.

On June 23, the Ministry of Tourism and Antiquities in the Gaza Strip launched the first-of-its-kind illustrated guide to shed light on Gaza’s 39 archaeological sites. The guide, according to the ministry, provides details about the archaeological sites in the coastal enclave, including mosques, churches, palaces, shrines and ancient houses, among many other sites.

“Every corner of every archaeological site tells a story dating back many years; a story about who built the site, about its components, its architectural description and its restoration projects,” Bitar noted.

Tarek al-Af, director of public relations at the Gaza Ministry of Tourism and Antiquities and the scientific content creator of the guide, told Al-Monitor that one of the key aspects of this guide is that it provides information on the findings of excavations in many different archaeological sites located in Gaza City.

He said, “The guide sheds light on the excavation findings and archaeological discoveries in monasteries and churches, such as Saint Hilarion Monastery in Nuseirat, the Byzantine Church in northern Gaza and the Church of Saint Porphyrius in the Old City of Gaza.”

According to Af, the guide also highlights important details about the excavation findings in Tel al-Ruqaish, Tel es-Sakan and Tell el-Ajjul in Deir al-Balah governorate, in the central Gaza Strip; the floor mosaics in Abasan, south of Gaza City; the al-Balakhiya archaeological site; and Tel al-Manazer in Gaza City.

Nariman Khalla, history researcher, archaeologist and director of Qasr al-Basha who also took part in preparing the guide, told Al-Monitor that the team was keen to have the illustrated guide serve as an intellectual reference about the Gazan civilization ever since the Canaanites settled there 6,000 years ago.

“We focused on the excavation findings in order to write about the history of the discovered sites and the most key unearthed antiquities, so we give each site the credit it deserves,” she added.

Mahmoud Balawi, project manager at the Iwan Center for Cultural Heritage affiliated with the Islamic University of Gaza, told Al-Monitor that some of the books that tried to document urban heritage in Gaza date back to 1994, when the Palestinian Authority was formed. These are books bear obsolete photographs and some landmarks that have been destroyed by Israeli wars on the enclave. According to him, these books do not include the restoration operations that have taken place of buildings and archaeological sites recently.

“Although the Gaza Strip is rich in archaeological sites, historical buildings, and material and immaterial heritage, only a few of these have been documented in a way that does not really reflect the antiquities found in this small geographical area,” he added.

Balawi said that what distinguishes the new guide is that it relies on new, focused and simplified scientific information that the general public can read and understand. However, he criticized the fact that the guide focused more on the historic public buildings and archaeological sites, while barely mentioning archaeological houses, to shed light on the urban history of the Gaza Strip.

He concluded, “There are 145 Ottoman houses [in Gaza], so covering them in detail would require several guides. This requires more effort to prepare an inventory of the historical buildings or the Ottoman houses that bear witness to Gaza’s history.”