Native technicians are behind some big archaeological discoveries in the Gaza Strip. 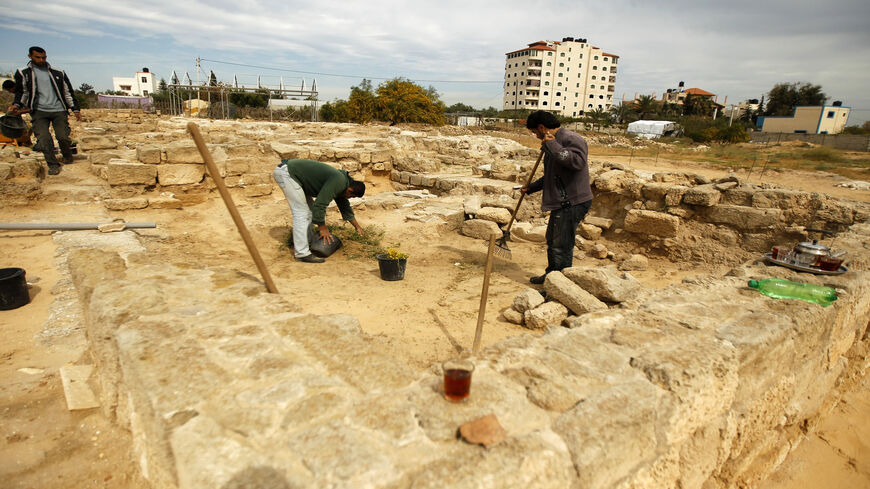 Palestinian workers clean a section of the archaeological site of the Saint Hilarion Monastery, one of the largest Christian monasteries in the Middle East, in Tell Umm al-Amr close to Deir al-Balah, in the central Gaza Strip, March 19, 2013. - Mohamed Abed/AFP via Getty Images

GAZA CITY, Gaza Strip — Before a group of visitors at Qasr al-Basha, also known as the Pasha’s Palace Museum, in the old town of al-Daraj neighborhood in Gaza City, tour guide Nariman Khalleh performed her job skillfully but was not as clear in explaining when it came to faunal remains.

Khalleh, along with her colleagues working in the field of antiquities in the Gaza Strip, enrolled in a training program on faunal analysis, a branch of archaeology focusing on the remains of animals at archaeological sites.

The program is part of a series of courses held by the French Premiere Urgence Internationale nongovernmental organization, under the supervision of the Ministry of Tourism and Antiquities in Gaza.

It is also part of the organization’s Intiqal 2030 program that was launched in 2017, which aims to rehabilitate prominent archaeological sites in the Gaza Strip, including the Byzantine Church in Jabalia in northern Gaza and the Saint Hilarion Monastery (Tell Umm Amer) in central Gaza.

Khalleh, who is scheduled to start a new training course in March, expressed her admiration of the knowledge of French archaeological expert Herve Monchot and the significant information and rich experience he gathered in Jordan and Afghanistan and other places around the world, which he shared with his students during the training seminar.

“I knew nothing before, but now I can explain to visitors about faunal remains, the history and impact of animal bones on the communities that dwelled in the Gaza Strip throughout the ages,” she told Al-Monitor.

Rene Elter, another French expert on the mission in Gaza, told Al-Monitor that zooarchaeology is not taught in Gaza’s universities, which made it necessary to train a multidisciplinary team capable of taking full and independent responsibility for the various aspects of the scientific study on archaeological sites.

Elter, who is the director of the scientific program at Saint Hilarion Monastery, said that animal remains were found in the monastery during excavation works. He explained that faunal analysis on these remains allows the reconstruction of the diet of the people who inhabited the area in certain periods, and to have an idea of which animals survived in Gaza throughout its history.

Rima Akashiya, an architect who has been working since 2009 at the Ministry of Tourism and Antiquities, was also among the trainees for the faunal analysis course, because her work entails the restoration of archaeological buildings, inventorying and archiving archaeological findings.

Akashiya told Al-Monitor that animal remains found in regular or archaeological excavations are an integral part of her work.

“During our inventorying and digging process [in previous years], my team and I found thousands of bones at the Saint Hilarion Monastery, in the Balakhiya area and other areas. We just archived them without bothering to study them or analyze the findings,” she said.

Akashiya noted, “The training courses came as a wonderful opportunity to learn about international expertise in this field and how to properly handle this type of findings. Upon completing the course, I believe we would have formed substantial experience in handling faunal findings."

She added that faunal remains can tell a lot about the weather and environmental conditions of an archaeological site, and helps to determine the religion that prevailed, the commercial movement, as well as the nature of diseases that were prevalent at the time.

The coordinator of Premiere Urgence in Gaza, Jihad Abu Hassan, told Al-Monitor that his organization has been working with the department of architecture, history and archaeology at the University of Palestine and the Islamic University of Gaza to “protect, preserve and strengthen archaeological sites in the Gaza Strip.”

He said, “So far we have trained 84 young men and 48 young women in various archaeological techniques aimed at preserving archaeological sites in Gaza. The relief works continues by supporting the Intiqal project through the work on integrated projects with various activities such as protection, restoration, training and capacity building, as well as the promotion of the threatened cultural heritage by involving the Palestinian community and making it aware of its importance."

Tariq al-Af, an archaeological guide at the Ministry of Tourism in Gaza, who participated in the faunal analysis training, told Al-Monitor that one of the courses’ objectives is to expand expert knowledge in relation to the nature and types of bones of animal remains and link them to the findings at the Saint Hilarion Monastery, and to understand the implications and environmental living conditions in the period to which these bones belonged, and their relation to humans.

He said that there is a practical way to identify the bones at Saint Hilarion Monastery, as well as an ongoing scientific study of the skeletal remains exhumed in the Roman cemetery, which was recently discovered in an Egyptian-funded housing project in the Gaza Strip.