Major archaeological sites in the Gaza Strip have been subject to looting and neglect, not to mention destruction from razing and urban sprawl. 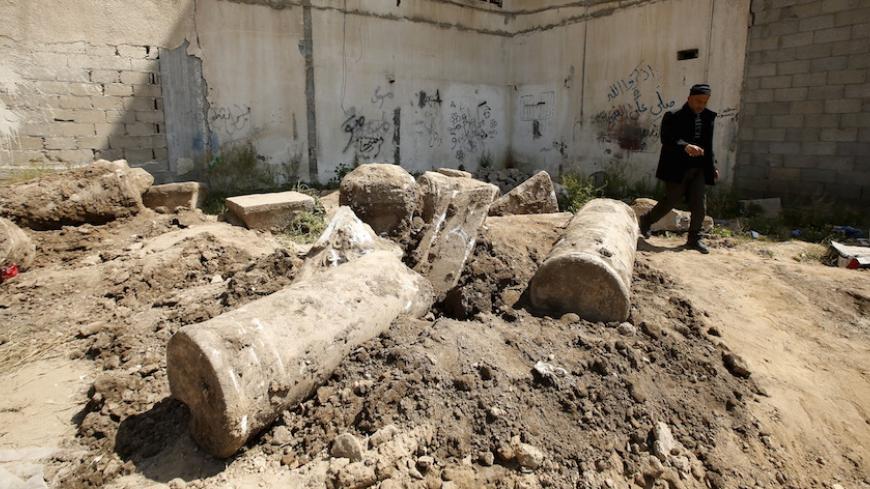 A man walks past ancient ruins that archaeologists say may be part of a Byzantine church or cathedral dating from around 1,500 years ago, Gaza City, April 4, 2016. - REUTERS/Mohammed Salem

GAZA CITY, Gaza Strip — Tall al-Ajjul, south of Gaza City, is one of the oldest archaeological sites in the Gaza Strip. The site is a mound on the north bank of Wadi Gaza, where the old town of Beth-Eglaim was located during the days of the Mamluks and Ayyubis.

In 2200 B.C., this town represented ancient Gaza, which was located during the Canaanite era in 3000 B.C. in the middle of what is now Gaza City.

Its important geographic location between Asia and Africa made it a battlefield for most empires of the ancient and new worlds, such as the Assyrians, pharaohs, Persians, Greeks, Romans and Crusaders.

Fadel al-Otol, a Palestinian antiquities restoration expert and member of the French Institute for Archaeology, which is part of the French Consulate in Jerusalem, told Al-Monitor, “Tall es-Sakan is the oldest archaeological site in Gaza and it was established 1,000 years before Tall al-Ajjul, in the Middle Bronze Age. Tall al-Ajjul acquired its name from a Golden Calf [“al-Ajal" referring to a calf in English]. The ground [in this region] was filled with pharaonic scarabs made of ivory, copper and bones. Water channels feeding Ancient Gaza stemmed from Tall al-Ajjul.”

Otol added, “Tall al-Ajjul was razed since it was considered a land owned by Palestinian families living in the region, rather than an important archaeological area.”

Ismail Abushmees, a researcher who gave a lecture in May titled “Gaza’s Alternative History,” told Al-Monitor, “The oldest two historical sites in Gaza are Tall al-Ajjul and Tall es-Sakan. They are the site of the original Ancient Gaza and the southern border gate to Ghaza al-Talliya.”

He added, “If excavation works are carried out at a depth of 3 meters [9.8 feet] or less, we will find numerous archaeological and pottery pieces.”

Abushmees explained that in addition to a large golden calf found underground, archaeologists discovered several small golden calves and ancient pharaonic scarabs made of gemstones such emeralds and copper and ivory.

A manuscript dating back to April 1, 1932, reads, “Flinders Petrie, a British archaeologist, found on this day, during excavation works at Tall al-Ajjul, a 6-meter-long and 3-meter-high Golden Calf with small diamond horns. The eyes are two black diamonds. It has four wings of a 4-meter length each. The calf weighs 5 kantars, 10 pounds 7 dirhams.”

On the importance of Tall al-Ajjul, Rashad al-Madani, a history professor at Al-Quds Open University, told Al-Monitor, “Tall al-Ajjul is Gaza’s ancient city in the Canaanite era. It was invaded by the Hyksos who fought a great battle against the pharaohs led by Ahmose I. It fell under the Muslim Conquest led by Amr ibn al-Aas in 635 during the Battle of Ajnadayn against the Christian-Byzantine Empire and was liberated from Christian crusaders by Saladin al-Ayyubi during the Battle of Hattin in 1187. Tall al-Ajjul hosts the first defensive tunnel in history, which is full of archaeological pieces from different eras.”

Madani called on the Palestinian government in Gaza and the West Bank to invest in the archaeological sites in Gaza to put an end to theft and looting, ensure follow-up by officials and rehabilitate the sites to turn them into important tourist attraction areas that lift the economy.

Hiyam Bitar, a research and studies official at the Ministry of Tourism and Antiquities, talked to Al-Monitor about the razing of Tall al-Ajjul by the families residing in the area and how the site was turned into a residential area.

She said, “Swedish archaeologist Peter Fischer came to the site in 1999, he probed the area in search for the lost city of ancient Gaza underground but had to halt his excavation works and leave Gaza in the wake of the Al-Aqsa intifada in late September 2000. He returned in 2010 and I accompanied him. He was surprised to see that the landmarks of Tall al-Ajjul had been drastically changed. He found out that the site he was working on is now owned by a family from Gaza. He asked the family to allow him to excavate the site for five weeks, but when he returned after two months he found out that the family had constructed a three-story building on the site.”

Bitar explained that in light of the security chaos in 2006 and 2007, citizens violated archaeological sites and the area witnessed an urban sprawl not subject to any government oversight.

She said, “The Ministry of Tourism is unable to control archaeological sites and guard them around the clock given that it has no guards or protection workers assigned for this purpose. There is clear neglect by the government in following up on and securing archaeological sites.”

Mohammed Khela, the undersecretary of the Palestinian Ministry of Tourism and Antiquities, told Al-Monitor, “We cannot find a solution to this chaos and the looting of archaeological sites. There is no national plan to manage these archaeological sites, not to mention the lack of government budget or coordination with international cultural institutions. The lands of Tall al-Ajjul have become registered in the names of [Palestinian] families, and the government has been unable to halt construction works or take back these lands in return for due compensation to their owners.”

He explained that all archaeological exploration and excavation works are now suspended in Gaza in light of the political situation, calling on the international institutions to excavate the numerous archaeological sites that are still intact.

He added, “Two residential towers were built in the vicinity of Tall es-Sakan under the reign of the previous government in 2000. We also stopped the construction of two other towers at the bases stage. We are ready to help any international excavation mission.”

Major archaeological sites in the Gaza Strip have been subject to looting and lack of maintenance and excavation works, not to mention razing and demolition. Many sites have been turned into military sites or headquarters and government and private institutions. Tall al-Ajjul has been completely razed. Residential areas have been built over antiquities buried underground. The nearby Tall es-Sakan has been turned into a military site for the Palestinian military faction Humat al-Aqsa (Al-Aqsa Protectors). It should be noted that the government has yet to implement any deterrent measures or show any interest.