A youth movement emerges spontaneously to prevent the demolition of Tall al-Sakan, the oldest archaeological site in Gaza. 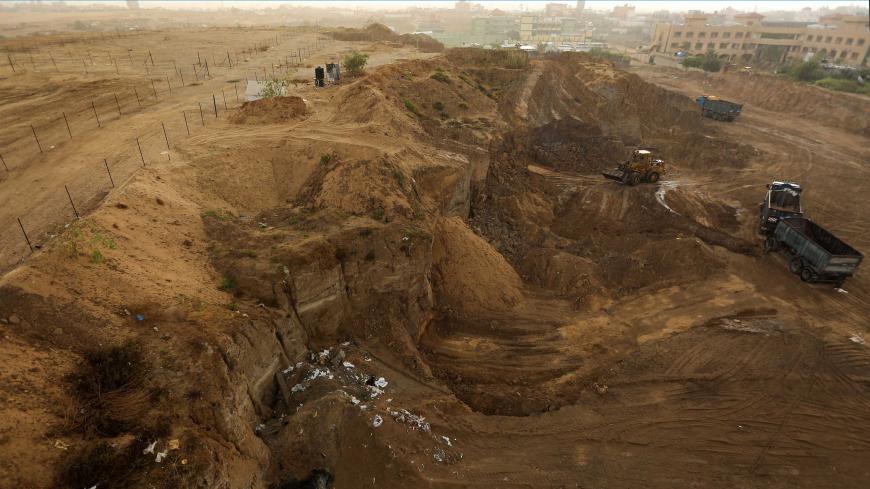 Bulldozers dig at the ancient Tall es-Sakan hill, south of Gaza City, Gaza, Oct. 9, 2017. Archaeologists and preservation activists in the Gaza Strip have managed to halt the destruction of the Bronze Age Tall es-Sakan mound site for now, but the future of what remains of the unique site, 'maybe the only fortified Canaanite city in southern Palestine' occupied continuously from 3200 to 2000 B.C., may still be in jeopardy. - MAHMUD HAMS/AFP/Getty Images

GAZA CITY, Gaza Strip — Young people launched a trending hashtag to urge the Palestinian Council of Ministers in its Oct. 17 session to halt all forms of pre-construction work at the archaeological Tall es-Sakan site in the northern Gaza Strip.

The young Palestinians launched an Arabic hashtag that translates as "Save Tall es-Sakan," which went viral on social media and was highly covered by newspapers and news websites. On Oct. 13, a youth group gathered at the historical site of Tall es-Sakan and protested the ongoing soil-moving operations.

The young men and women gathered at Tall es-Sakan and called on all parties to the Palestinian government, represented by the Ministry of Tourism and Antiquities in Gaza, the Palestinian Land Authority (PLA), as well as history experts and professors, to stop the works at the oldest archaeological site in Gaza.

He asserted that the movement was a nonpolitical one aimed to mobilize young people to act to preserve archaeological sites suffering neglect or looting.

On the historical and cultural importance of Tall es-Sakan, Fadel al-Otol, a Palestinian antiquities restoration expert and member of the French Institute for Archaeology, which is part of the French Consulate in Jerusalem, told Al-Monitor, "The site dates back to the Bronze Age (3,500 B.C.). It was excavated by the French mission in the period between 1998 and 2000. Two layers of human activity were found at the site. The mission aimed to understand the nature of human presence and explore the relationship between ancient Egypt and the southern Levant."

He added, "The excavations at Tall es-Sakan were stopped in 2000 in the wake of Al-Aqsa Intifada. The site is located on the outskirts of the former settlement of Netzarim. After Israel withdrew from Gaza in 2005, excavation activities were not resumed in light of the troubled political situation in Gaza."

Hiam Bitar, a researcher at the Ministry of Tourism and Antiquities in Gaza, told Al-Monitor, "The site's surface area was about 200 dunums [49 acres], but under President Yasser Arafat it was delimited at 81 dunums. Under the rule of Hamas, several [construction] projects were established at the delimited location."

He added, "The Ministry of Tourism sent several letters to the PLA to stop these projects, including the University of Palestine, Gaza University for Girls and al-Dhafer Residential Towers. The site surface area was reduced to 45 dunums. Moreover, the Hamas government granted 2 dunums to its employees within the scope of the public land distribution scheme."

French archaeologist and consultant Jean-Baptiste Humbert, who came to Gaza with the French missions, visited the site recently. He issued a statement Sept. 8 to university professors and those interested in archaeology calling for protecting the entire archaeological site and noting that the works have caused irreversible damage and must be stopped immediately.

Humbert acknowledged the urgent need for the construction of residential projects but requested a time extension that would allow him to dig in areas allocated for construction projects so as to salvage monuments that may exist there before resuming the pre-construction activities.

Al-Monitor tried to contact Rula Maiah, the Palestinian minister of tourism and antiquities in Ramallah, to inquire about the ministry’s position regarding the works at Tall es-Sakan, but to no avail.

Jamal Abu Rida, the head of the General Directorate of Antiquities and Cultural Heritage at Gaza's Ministry of Tourism and Antiquities, told Al-Monitor, "We made several appeals to the PLA to stop bulldozing projects at the site, but it did not respond. [The PLA] said the Ministry of Tourism was given ample opportunity to conduct excavation works at the site but did not embark on these works to determine its area."

"The lack of funding and the decade-long siege imposed on the Gaza Strip prevented international exploration missions from completing their task," he added.

In this context, a Sept. 21 investigative video report by Hamas-affiliated al-Resalah media outlet outlined new developments at Tall es-Sakan. In the video report, Hassan Abu Riala, the deputy head of PLA, accused the Ministry of Tourism and Antiquities of not clearly delimiting the site.

"The Ministry of Tourism and Antiquities does not have the allocated budgets or the technical staff for excavation works," he added. This may be what the PLA saw as a green light to start the pre-construction works.

Mahmoud Haniya, the producer of the video report and one of the organizers of the youth movement to protect Tall es-Sakan, told Al-Monitor, "There is a clear disregard by the official authorities. At the site, in the presence of archaeologist Jean-Baptiste Humbert, we found a 5,000-year-old six-meter-long [20-foot] wall. The activities constitute a major crime against the oldest archaeological site in the region."

The statement called on the Palestinian government to "give the Ministry of Tourism and Antiquities sufficient time and budget to complete the excavation works at the site of Tall es-Sakan or allow it to bring funding from international bodies specialized in archaeological excavation works."

Despite the temporary suspension of the operations at the site following the young peoples' movement and media calls, however, young Palestinians in the Gaza Strip fear these operations will resume before the start of new excavations aimed to demarcate the site and preserve its archaeological monuments.