Sufis have opposed the way the Hamas government came to power, prompting the movement to shut down their institutions and restrict their religious activities. 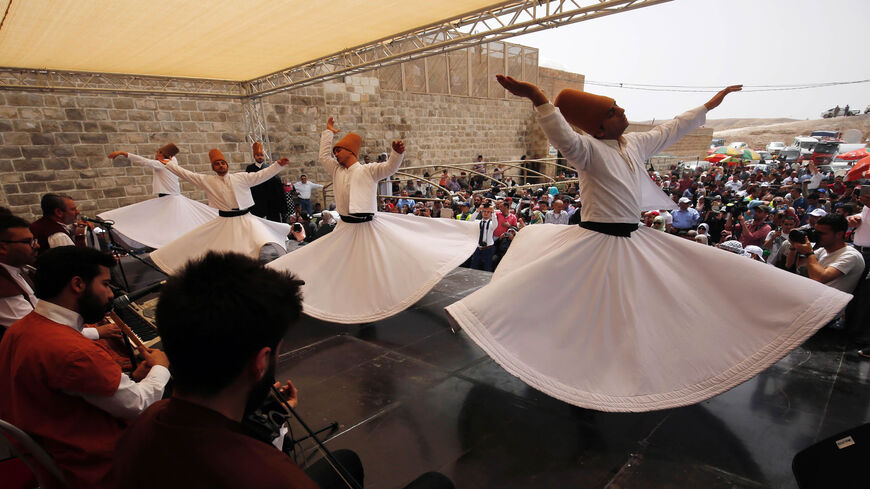 Whirling dervishes perform during a festival at the mosque of Nabi Musa, where the tomb of Prophet Moses is believed to be located, in the Judean Desert near the town of Jericho, West Bank, April 8, 2016. - Abbas Momani/AFP via Getty Images

A number of Sufi mosques are spread across the Gaza Strip, and each sheikh practices his own way of Sufism. But they all participate in performing the weekly “session,” which is a Quranic session in which prophetic invocations and praises are chanted.

Sufism in Palestine can be traced back to the Mamluk era, and some Sufi families in Gaza have become well known, such as the Sa’afin and Khalidi families.

Sufism has always raised controversy among some Muslims, but it remains a very important issue as many have studied Sufism in an attempt to reach a conclusion about Sufi thought. However, many Sufis refused to talk to Al-Monitor for fear of repercussions from Hamas.

One sheikh of the Alawiyya order told Al-Monitor on condition of anonymity, “The origins of our order [religious institution] go back to Sheikh Ahmad bin Alawi. Sufism is one of the foundations of Islamic beliefs. The weekly session we hold is a clearing of worries and sins; followers gather to remember God and the verses of the Quran without distortion as some describe it and without holding celebrations and drumming.”

He said that he keeps good relations with the Palestinian factions in the Gaza Strip, but the order’s rejection of Hamas’ rule is based on the movement’s insistence to rule by force of arms. “There is nothing in the Book of God or the sunna that motivates me to fight those who oppose me with weapons, for God says, ‘And speak kindly to all people.’”

A Sufi affiliated with the Ahmadiyya order told Al-Monitor on condition of anonymity, “Society’s negative view of Sufism stems from the new generation’s ignorance of the true meaning of Sufism. Our only goal is to restore the time of the Prophet Muhammad, and Sufism serves to reform oneself away from the inclinations and malice of political parties and their only interest to assume political positions.”

When Hamas assumed power in 2006, it shut down many Sufi zawiyas (meeting places) on the pretext that they posed a danger to society.

Nasser al-Yafawi, a Gaza-based historian who opposes Hamas’ actions against Sufis, told Al-Monitor, “The Sufis are wonderful. I have visited the Qadiriya, Jaririyah and Rifa’i orders, and I witnessed a full weekly session with them. There is no difference between the orders. Their session is a spiritual imagining of God and their celebrations are considered a religious dance to draw closer to God.”

He said, “At the beginning of its rule, Hamas closed many Sufi zawiyas, claiming Sufis pose a danger to Gazan society. This is a major false accusation because Hamas wants to monopolize the leadership of the Islamic movements. I do not support Hamas’ point of view and unjustified actions. It wants to rule so-called Islamic movements and disagrees with all parties, not just Sufis.”

Yafawi noted, “Some rumors spread about Sufis practicing freemasonry rituals and that they carry out acts that violate social values. Hamas closed some zawiyas of the Ahmadiyya, Shadhiliyya and Alawiyya orders, restricting their movements and preventing them from holding religious ceremonies and weekly sessions. This is a violation of freedom of expression. I have personally verified this and discovered that it’s all malicious rumors and false arguments.”

Meanwhile, many support shutting down Sufi zawiyas. Saleh al-Raqab, a professor of Islamic faith at the Islamic University of Gaza and a former minister of endowments, told Al-Monitor, “Sufism in Gaza is made up of groups affiliated with sheikhs outside the enclave, such as the Shadhiliyya and Alawiyya orders, and they have many heresies and myths, as we see in their many zawiyas, such as dancing in mosques. They have very corrupt beliefs, but in the Gaza Strip they apply them without understanding their meanings, such as begging for the Prophet Muhammad to fulfill their needs.”

He said, “There is also a lot of polytheism, which is exemplified in their book 'The Unity of Being' by Ibn Arabi. This person is an atheist since he sees all existence as one and believes there is no difference between a Creator and a creature. The Sufis here in Gaza practice rituals without the slightest understanding. They kneel to their sheikhs as we kneel to God. They even kiss the sheikhs’ hand and this represents polytheism and disbelief in God. The Sufis do not offer anything to Islam, but separate religion from politics. They are using social media nowadays to attract the younger generation, and this is a disaster.”

Raqab noted, “Dozens of young people are joining Sufism in the Gaza Strip because they have a great spiritual void that needs to be filled. I am not aware of the fact that Hamas closed Sufi zawiyas, nor about restricting their movements and celebrations, because I have seen many zawiyas opening. But they must be closed before they spread further.”

Raqab explained that his doctoral thesis was about Sufi sects from an ideological point of view, and he also teaches these topics to university students as he believes that Sufism in the entire Arab world has major deviations and contradicts Islam altogether.