A unique group of some 40 women come together each week at a religious school in Nablus to practice Sufi rituals and study the faith. 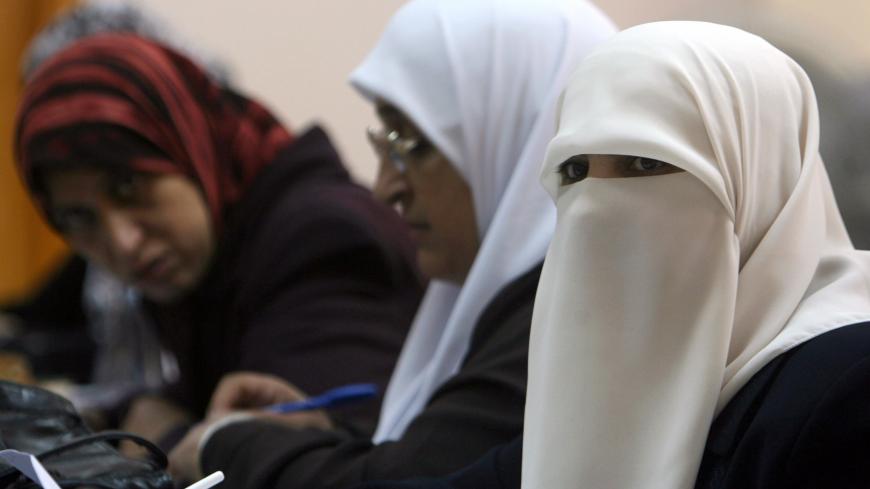 NABLUS, West Bank — The classes in Sufism that Jamila Haroun al-Debai took more than a decade ago changed her life. As a member of the General Union of Palestinian Women, Debai used to attend every funeral and demonstration in Nablus, but today she devotes most of her time to Sufism, describing her devotion as “worth all the work she has done in the past.”

Debai leads a group of 40 women who gather every Monday at the Sheikh Muslim Zawiya, a Sufi religious school, in the heart of the old town in Nablus, to attend the hadra, a collective ritual performed by Sufi orders.

The hadra, which literally means “presence,” starts with adherents reciting the Quran and collectively chanting short prayers, either aloud or silently, while counting on a set of prayer beads. The chanting of rhyming verse is supposed to bring one closer to God, a practice called “dhikr” in Arabic, meaning “remembrance.”

The Nablus zawiya was rehabilitated by the Palestinian Ministry of Religious Endowments 15 years ago. “We used to gather here for religion classes, but we felt that hadra is spiritually richer, so we switched from plain lessons to hadra,” Debai told Al-Monitor. What began with some 10 women two years ago now attracts 40 regulars, some of whom travel from the Jordan Valley and surrounding villages to attend.

Debai embarked on her Sufi journey in 2007, when a close friend suggested that she join Sufism classes at Nablus’ al-Ghazali Center for Religious and Sufism Studies. “I used to cry during lessons, [because] I was deeply moved by the philosophy of Sufism and the life of Prophet Muhammad,” she told Al-Monitor.

The Ghazali center closed due to a lack of funding, but Debai’s interest in Sufism did not wane. She continued to study its history and rituals. Debai had no problems finding a place for hadra, as there are many zawiyas around Nablus. “No one in the community objects to these sessions, which are held in a blessed place that is valued and known by the city’s residents,” she said.

Many women want to attend the hadra and pray. “Each newcomer to our sessions becomes a regular attendee. But, outside Nablus, some have voiced objection to the dhikr, condemning it as heresy,” Debai said.

One of the first things Debai does, she remarked, is to explain to newcomers to her dhikr sessions that they are all about contemplation, similar to gatherings the prophet himself held. Chanting and reciting prayers is usually coupled with minimal, rhythmic movements of the arms and shoulders while seated. There is no dancing, twirling or other overly expressive body movements.

The sessions begin with repeating that there is no God but God, then the chanting of the Shahada, “There is no God but God and Muhammad is his prophet.” Then the participants recite the 99 attributes, or names, of God, and read the Fatiha, the first chapter of the Quran.

After the prayers, they continue with a lesson, during which they study the biographies of Sufi sheikhs and scholars, such as Sheikh Sumadi, one of the most prominent sheikhs of the Qadiriyya order, who arrived in Nablus with the army of Salah al-Din in the 12th century. All the participants in Debai's circle are now familiar with Sumadi.

Debai’s hadra for women is thought to be the first of its kind in Nablus and perhaps among Sufis in all of Palestine. Abdul Karim Najm, head of the Supreme Islamic Sufi Council of Palestine, told Al-Monitor, “We regard hadra sessions as ‘ijtihad,’ [personal initiative or reasoning], but it is unusual that women go to the zawiyas and hold such sessions. For us, there is nothing wrong with that, as they are also allowed to go to the mosques, but they should remain segregated from men.” Najm further explained that originally only the sheikhs of a Sufi order at the zawiya were allowed to hold hadra sessions, implying that it was unusual to see a self-taught person lead a hadra.

Mohammed Sherbini, a researcher in Islamic thought and philosophy at the Tekwen Center in Nablus, said to Al-Monitor, “Women can study and teach Sufism, which can help them and their family to reach a higher level of spirituality. They can also hold collective or individual hadra session at home. They are also allowed to go to the zawiya for the celebrated events, such as the prophet’s birthday, the Hijra New Year, but making sure to choose an appropriate place for gathering without men.”